“Traveling is a metaphor of life” An independent theatrical person Sashko Brama, and the actor and photographer Andrii Buchko have decided to walk across this country from the extreme western point Chop to the Donbas disengagement line. They want to find answers to the simple and, at the same time, difficult questions: what in fact makes the life of people in big cities and small villages, what do they think of Ukraine and their compatriots in other regions? What do they have in common and in what ways are they different? The guys told The Day about the expectations from the travel and its real conditions as well as shared their impressions of what they saw and heard in some western regions.

“POLITICS IS OF NO INTEREST TO US, BUT WE WILL HARDLY ESCAPE IT”

How did you hit upon the idea of this travel? Why did you name the project Enter UA?

Sashko BRAMA: “Everyone perhaps wishes to travel, and we are no exception. I suggested to Andrii, with whom I had worked on several projects before, that we combine artistic work and traveling. It’s good that he supported me, for I wouldn’t have set out on this journey single-handed. So, we began last fall to frame a concept, think about the route and money, and psych ourselves up for the trek.

“We are going to combine multimedia, video art, and sound in the stage production. As the music is electronic, we thought that the title should be consonant. So we came up with Enter UA.”

Why did you choose to walk? How did you form the expedition’s itinerary?

S.B.: “On the one hand, a walking tour is act of art, a performative action for which you make certain physical efforts and thus come to know yourself and your own capacities. On the other hand, this allows you to better explore the environment and makes you as open to reality as possible. At any moment, a certain event will be unfolding before your eyes, and you can become a part of it or just look on from aside.” 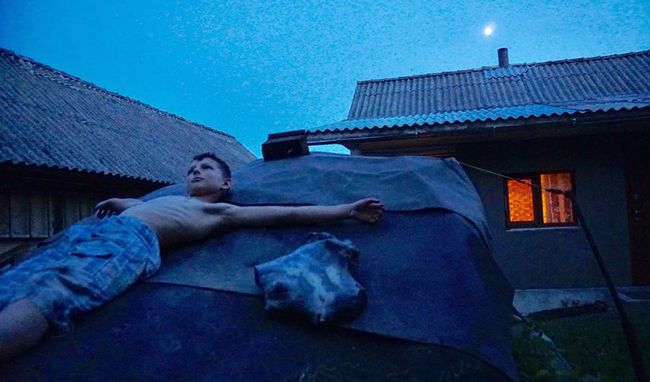 THE VILLAGE OF HORYNKA IN TERNOPIL OBLAST. A QUIET SUMMER NIGHT. AFTER PUTTERING WITH RABBITS, OLEH GOES TO SLEEP

Andrii BUCHKO: “We had read stories of the people who travel and hitchhike and watched a lot of Youtube clips. But we understood after the first day that our idea of this travel was wrong and that it would be more difficult than we had thought.

“Backpacks were very heavy due to photo cameras. We had to send some of the belongings and appliances back to Lviv, for they were just of no use. Too busy with buying cameras, we almost forgot about the main thing – the tent. We bought it with our last money and never regretted this. It would have been the gravest mistake to go without a tent or without a thermos.”

What do you pay attention to during a journey?

S.B.: “The main thing is to be as much open to the environment as possible, for the latter is supposed to dictate a dramatic concept on us. Making a documentary always means cooperation between the author and reality, so the result depends not only on us.

“Every region has some burning problems that we come across. So the list of themes is drawn up in the course of the hike. Then we will filter the gathered material and formulate the overall dramatic concept. Politics is of no interest to us in this travel. But we will hardly escape it because the very fact that we are walking from west to east can be viewed as a political action.

“We’ll be recording what we’ve seen in different ways. Andrii usually photographs, while I prefer video-filming. Sometimes we write something down. But I’ve stopped keeping a diary lately for lack of time.”

ON COUNTERING THE FORCES OF ENTROPY

What surprises have you already come across on your way?

S.B.: “We sometimes joke that if we were to write a play and think up a unique day, we wouldn’t invent anything better than what really happens to us.

“One day we came to a village and decided to interview its mayor. He was out, and his secretary sent us to the library. We spoke to a lady who had worked there for more than 40 years. She told us about how books kept changing on the shelves and recited some poems. Then we met the electricians who were taking down a dead stork from the lamppost. They advised us to go to Klevan and see the Tunnel of Love. So, after accompanying them to some place where they were to fix a power cut, we went there. In the evening, we ate tomatoes and sandwiches in the Tunnel of Love and discussed Ukrainian ‘truths.’ So you can never know for sure what will happen to you in the evening.” 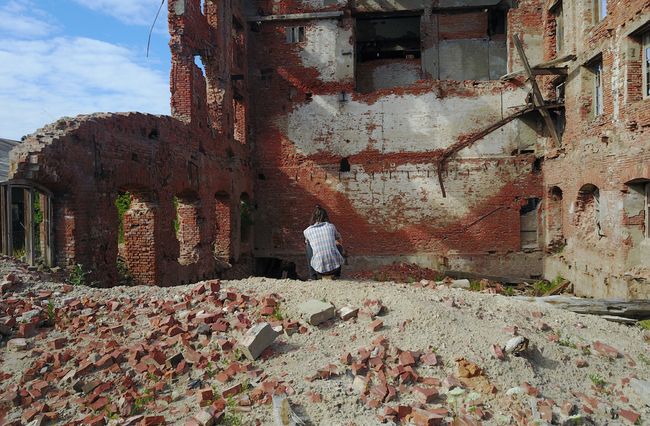 AN ABANDONED RAILWAY STATION IN KALUSH, IVANO-FRANKIVSK OBLAST, A TOWN WITH AN EXTREMELY DIFFICULT ENVIRONMENTAL SITUATION

A.B.: “A road accident at the beginning of the hike unsettled us a little. A drunken motorcyclist hit me on the outskirts of a Transcarpatian village. We had to stay behind for two weeks, for I couldn’t walk well. And friends were asking: ‘What’s that? A month has passed, but you are still a two hours’ drive from Lviv.’ But it’s all right now.”

What situations and meetings have stuck in your memory?

S.B.: “In some areas of the Ternopil region, land is privatized by Germans or Danes but cultivated by Ukrainians. They grow rapes or other crops that exhaust the soil. We visited one of these farms and saw that there were good conditions for workers – they are provided with meals, there is a washing machine, a shower, etc., there. I don’t know if Ukrainians treat their workers as well as Germans do, but it is rather a disputable situation, and you can’t possibly draw an unambiguous conclusion here.

“In Rivne oblast we saw rural alcoholism. Although it is rather a banal topic, we were really struck with coming across drunks in every village. What particularly surprised us was the attitude of a saleswoman: ‘There are so many ‘outlets’ in our village. The police know it all, but nobody cares. I also sell vodka, but my conscience is clear, for I only do my work.’

“Very many people go to the abovementioned Tunnel of Love to have pictures taken, and a host of wedding ribbons hang there. But that tunnel also contains a strategic track on which equipment is carried to the ATO zone. We also met a soldier there. He said that when he was a small boy, he and his friends used to kill grass snakes and hang them along the tunnel. He called it a ‘tunnel of death.’ In other words, diametrically opposite things come together in this place. We saw it as an interesting metaphor.

“In Buchach we went to film the town hall. The tower clock chimed at noon and began to play the anthem of Ukraine. This structure has been under restoration for more than 10 years. We came into the basement – everything was covered with litter and water. It is like the situation in the country, when everything is sleek outside, but in reality… 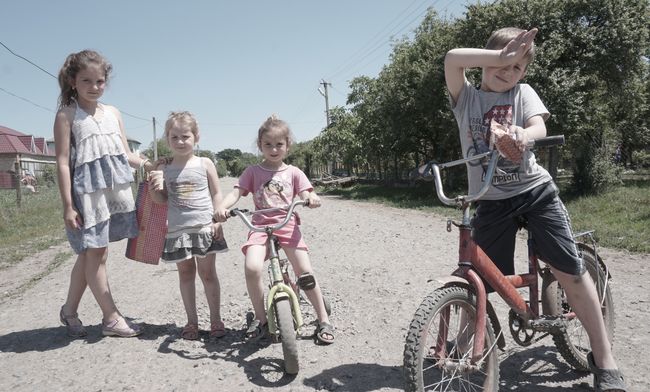 TRANSCARPATHIA IS A VERY ETHNICALLY-MIXED REGION. PICTURED: CHILDREN FROM A VILLAGE MOSTLY POPULATED BY ETHNIC HUNGARIANS

“We also met Pavlo, a 72-year-old restorer, who once restored this town hall himself. For me, he personified the existential theme of a struggle between man and the forces of entropy. Interestingly enough, the anthem of Ukraine plays upstairs, and he listens to ‘metal’ downstairs.

“What struck us perhaps the most is the Hutsuls who live in a wooden shanty in the thick of the forest and do the logging. They consider it as a craft of sorts, not as a crime or an injury to nature.”

“PEOPLE FEEL SOME FEAR OR UNCERTAINTY”

Would you tell me more about the people you came across on your way? What do they have in common? Are there many differences between the residents of different regions?

S.B.: “Every individual is like a separate country, a world apart. They are totally different people. What unites them is the passport of a Ukrainian citizen and, partly, the language. It’s very difficult to reduce them to a common denominator. 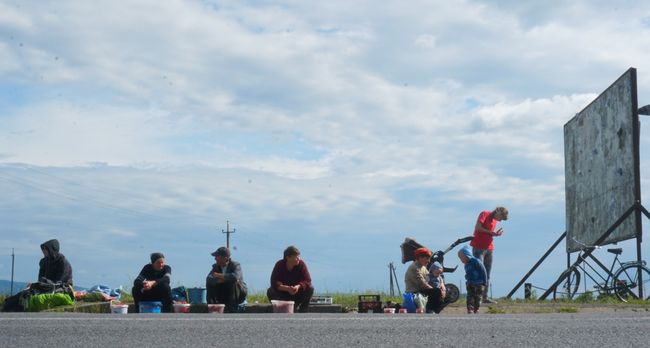 ROADSIDE TRADE IS RATHER A FREQUENT PICTURE IN UKRAINE. EARLY IN THE SUMMER AUTOS RUN ON TRANSCARPATHIAN ROADS PAST THE VILLAGERS WHO SELL STRAWBERRIES

“In general, people feel some fear or uncertainty. Maybe, they are embarrassed about being insufficiently good-looking or incapable of speaking nicely ‘for the movie.’ Some look alerted because they don’t know the purpose we are doing this for. People are more open if there is no camera – they will speak about what they don’t like, but still they remain fearful.”

A.B.: “And some people, on the contrary, begin, for example, to play the accordion once they see the camera. But this looks rather superficial and feigned. And it is very difficult to raise the curtain of private life because people protect their space. They find it hard to confide in strange people. Maybe, this requires a little more time. Yet, although people didn’t like photographing, nobody rushed to fight or take the camera away.”

Has the travel already changed anything in you?

S.B.: “Traveling broadens your picture of this world. It takes time to think over what you have seen. We get very much information in a day. It even seems to me that perception dulls in the course of time. At first everything surprises you, but then it gradually becomes a norm. I have also understood that I will not get lost in any difficult situations.”

A.B.: “We have walked only a part of our way, and the most important things are ahead. I feel no radical changes in myself now. I’ve only perhaps understood that I will be more helping those who are on the way. In all probability, I must come back home to understand that I’ve become a different person.”

What is your next destination?

S.B.: “We will follow a part of the itinerary that passes through Polissia, stay in Kyiv for some time, then go down the Dnieper as far as Zaporizhia, and from there towards the Donbas. We’d like to reach the frontline, but it is dangerous to walk there. Maybe, we will go together with volunteers.”

What will you advise those who will want to make the same kind of journey?

S.B.: “For me, traveling is a metaphor of life. If you don’t want to get into a terrible fix, you should adhere to elementary moral principles. For example, we are trying as hard as we can not to lie or criticize; we do not steal and do not eat meat. Besides, it is very good to read religious literature on a journey. We also strongly advise you not to pollute the environment.”

By Daria TRAPEZNIKOVA, The Day. Photos courtesy of the article’s heroes