The way independence was gained Leonid Kravchuk is now actively working on a new book. He is going to celebrate his 85th birthday in early 2019 – a venerable age indeed. The first President of Ukraine wants to surprise everybody with the political details he has never disclosed before. “I want to show historical and state-formative stages of Ukrainian political life,” Mr. Kravchuk says to The Day. “It is very important that the new generation should have first-hand information about our recent past, draw conclusions, and make no mistakes again.” The work on the publication still continues, but Mr. Kravchuk has handed over to The Day, just on the eve of Independence Day, some extracts from the book about the decisive events in 1991.

We decided on holding the Verkhovna Rada’s extraordinary meeting on August 25, although we weren’t sure that any resolution would be passed. After the August Coup [aka 1991 Soviet coup d’etat attempt. – Ed.], the situation was changing so quickly, there was no time to make any coordinated decisions. We had to act fast and do it the right way. During a meeting of the VR Presidium, we resolved to work out a document proclaiming Ukraine’s national independence, although, on August 24, no one had a clear idea about it. We didn’t have a draft ready to submit. There were several groups of MPs working on it, including Dmytro Pavlychko, Volodymyr Yavorivsky, and Levko Lukianenko. The latter worked on his draft alone, although they all kept in touch with each group and, partially, with me. Dmytro Pavlychko cooperated with me especially actively and fruitfully. Viacheslav Chornovil was also involved, but kept his distance. Levko Lukianenko submitted his draft on August 23, on the eve of the [VR extraordinary] meeting. I read all the drafts submitted in Dmytro Pavlychko’s presence and told him: “I think that Levko Lukianenko’s draft is short and to the point, compared to the others. Mr. Pavlychko, please take it and work on it with Levko Lukianenko, so we can have a bill.”

Later, after the bill had been submitted, we had to resolve another issue, namely who would present it in parliament. Dmytro Pavlychko suggested Levko Lukianenko, considering that he was author of the draft. I said I didn’t mind, but what about the audience, considering the communists’ attitude to Levko Lukianenko, that there would be jeers and catcalls once he took the floor. Dmytro Pavlychko then suggested Volodymyr Yavorivsky and I said I didn’t mind, but that we should consult Levko Lukianenko first; also, we both knew how the communists would respond to Volodymyr Yavorivsky, what with his [anti-Soviet] articles.

In the end, I said: “I’ve talked to the leaders of all regional groups and chairs of committees, so I guess I should be the one to present the bill. They won’t respond to me the way they would to Lukianenko or Yavorivsky. Most importantly, I’ll speak as Chairman [Speaker] of the Verkhovna Rada.” 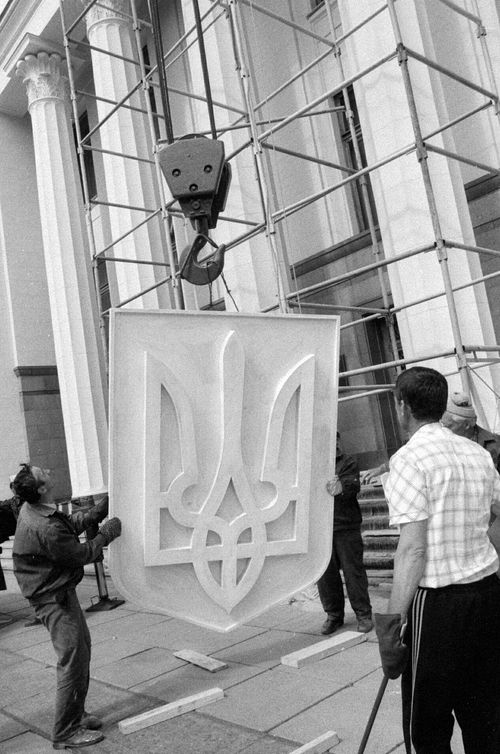 Meanwhile, the group of MPs led by Communist Stanislav Hurenko were working on their draft. It read, in part, that Ukraine must support the August Coup in Moscow, thus trying to preserve the Soviet Union. In fact, he said as much, addressing the Verkhovna Rada. Let me tell you what happened. I was at the rostrum when I saw Larysa Skoryk gesture her desire to take the floor. I gestured back: Be my guest, but then Stanislav Hurenko, seeing Larysa Skoryk on her way to the rostrum, followed suit, so in the end there were three of us in front of the rostrum: Skoryk, Hurenko, and yours truly. I stepped back and let them take their turns addressing the audience.

On August 24, we were ready to pass the bill, but we weren’t sure how many MPs would vote for it – there could be 226 or over 300 yeas. This was especially important for me; I wanted a constitutional majority vote. To figure out the situation, I met with the leaders of regional groups [factions] and then realized that the bill would be passed. After that I acted confidently and put it to the vote.

There is something else, however. Larysa Skoryk ran over to me before the vote and said: “We had a meeting and we’re against this vote because we don’t want the commies to offer us our independence on a silver platter.” And then Deputy Speaker Volodymyr Hryniov echoed her. It transpired that they had had a meeting on the third floor and made their decision: decommunization first and independence second. And then Dmytro Pavlychko ran over, enraged, shouting he’d shove it all up their – you know what I mean. I saw that he was ready to hit the roof, so I said, “Take it easy, man, we’ll figure it out.” But he insisted: “Can’t you see what’s happening? They’re doing everything to screw up everything!”

Come to think of it, what would happen if they tried decommunization in August 1991? Would their bill be passed, considering that most MPs (370 out of 450) were communists? As it was, they had another meeting and finally decided to vote for the independence bill. In the end, we had 346 yeas, three abstained, 12 “absent,” and only one nay from Serhii Tsekov (Crimea). Remarkably, Leonid Kuchma was among those “absent.” The man would before long become Prime Minister and then President of Ukraine. When filling in the first Verkhovna Rada registration card, he wrote “Russian” in the nationality column.

It was clear that the Declaration of Independence would be adopted, but there was another issue to be resolved: would it be legitimate in the context of the All-Union Referendum of March 17, 1991?

Most importantly, Ukraine’s independence was supported by the parliamentary majority – and you should see what happened in the audience after the vote! People were cheering, singing and dancing...

I think that most communist MPs voted for independence simply because they were scared, especially after Boris Yeltsin’s victory in Moscow. The leadership of the Communist Party of Ukraine was aware of what was happening in Kyiv – they were scared they would be physically assaulted if they didn’t vote for it.

It was clear that the Declaration of Independence would be adopted, but there was another issue to be resolved: would it be legitimate in the context of the All-Union Referendum of March 17, 1991? Ukraine had voted for the preservation of the Soviet Union: 70.2 percent yeas, although it was the lowest positive result compared to those in the other [Soviet] republics. There was no way to cancel its results, so another referendum was the only alternative. I addressed the Verkhovna Rada with the alternative. Some objected that there was no such law in the republic, that there was only the law on an all-Union referendum.

Moscow was quick on the uptake and I received a phone call from one the secretaries of the Central Committee of the Communist Party of the Soviet Union. The man said: “I hear that you’re organizing a referendum, but you have no legislation for it, so it won’t be legitimate.”

I replied: “We have a revolutionary situation here and the people want it. Come visit us, you’ll see what’s happening at the Verkhovna Rada and in the street. Soviet flags are being replaced with Ukrainian ones everywhere. It’s a revolution, do you understand? I must act accordingly.”

I moved to put the referendum on the agenda, but then our national patriots, led by Chornovil, stepped in, saying that my initiative was foolish. They went on to say that Leonid Kravchuk was a smart alec who wanted a referendum that was a losing game, instead of rejoicing in our victory, and that this would surely make their cause fail. After that I refused to take the floor and just proposed those who believed in the vox populi to vote for it. Save for two MPs, Les Taniuk and Viacheslav Chornovil, all said yea. Then they [Taniuk and Chornovil. – Ed.] went to St. Sophia Square and addressed a rally, saying things [about me] that made my hair stand on end, but we did it! A republican referendum was assigned for December 1 that year.

Hadn’t we made that decision, Ukraine wouldn’t have been independent now. By the way, its independence was recognized [internationally] only after the all-Ukrainian referendum. Within a month, this recognition was confirmed by 56 countries, with Poland and Canada topping the list.

Why did most people support independence? That period was marked by public unrest, especially in the Donbas (coal miners would visit the apartments of ranking apparatchiks, opening their refrigerators, revealing sausages and other food and drink [no ordinary citizen could buy]). Mikhail Gorbachev was said to have engineered the August Coup, especially after he started telling tales about finding an old Grundig radio in the attic and learning about what was happening in Moscow. Some tales! People could see what was happening, that the Soviet Union was falling apart, that Gorbachev had lost control of the situation, and that independence was the only option. In fact, I feel sure that most people in Ukraine shared my view on the matter at the time. Some might not realize that the Soviet Union was falling apart, they wanted more [civil] rights and independence. As it was, practically all of them voted for it, in every town and village, even in Sevastopol 57 percent yeas – something few had believed at the time. That referendum is still legally valid, and the same is true of the Crimea. The so-called referendum staged in 2014, at Russia’s gunpoint, cannot override the results of Ukraine’s true democratic vox populi of 1991.

Leonid KRAVCHUK, special to The Day