A step towards de-occupation

“The law provides legal principles. Meanwhile, the strategy itself should be developed separately and on another level,” an MP believes Legislators spent January 16 debating the so-called law on reintegration, although the word itself is absent from it. The bill’s long title is “On the Peculiarities of State Policy on the Restoration of the State Sovereignty of Ukraine over the Temporarily Occupied Territory of the Donetsk and Luhansk Regions of Ukraine.” It passed the first reading last fall, but more than 700 amendments were submitted to the bill before the second reading. Accordingly, their consideration took time. The MPs continued to consider the amendments at an evening session, mostly rejecting all proposed changes. In particular, the efforts of some members to include the Crimea issue in the law were unsuccessful. Legislators blocked them one after another. When Refat Chubarov stated the need to include in the law all the occupied territories, and not only the Donbas, another representative of the Petro Poroshenko Bloc Ivan Vynnyk replied that “it is impossible to change the title after the first reading, the more so that the bill is already uniform.”

Meanwhile, protests continued outside the Rada building. Activists of the “Stop the Revanche” movement demanded that it pass the laws on the de-occupation of the Donbas, on collaboration with the enemy, on the Anticorruption Court, and on language and church issues. “When talking of revanche and revanchists, we mean those who oppose the changes that have occurred after the Maidan events,” member of the Youth Nationalist Congress Serhii Repik commented for The Day. “Parliament has long ignored our demands, saying that now is not the right time for these laws, but it is not so, and there is no room for delays anymore. I do not see expanding the powers of the president when making decisions in the war zone as something terrible, because it will allow our side to take speedy action. Of course, this law is imperfect. But I think it needs to be passed. It is better to have little progress than none.” 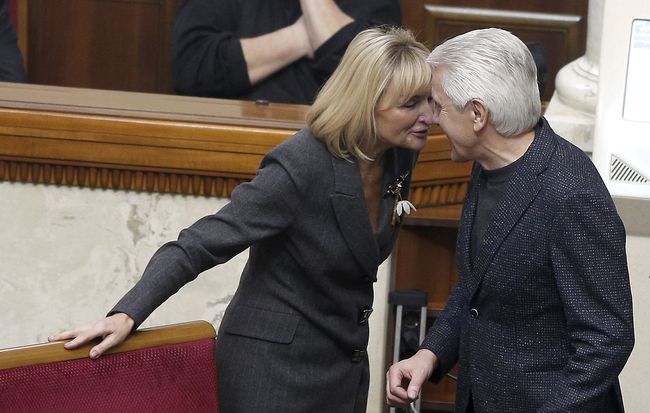 Let us recall that the document, in particular, regulates the legal basis for the use of the Ukrainian Armed Forces in the eastern part of the country and officially recognizes Russia as an aggressor occupying part of the Ukrainian territory. The so-called anti-terrorist operation (ATO), which has lasted for almost four years, is to be stopped. What else does the new bill envisage and why the process of its adoption has been so complicated?

Maria ZOLKINA, an analyst of the Democratic Initiatives Foundation:

“This bill is primarily political in nature. An important positive point is that the state relabels its own actions. That is, Ukraine abandons the term ‘ATO’ and recognizes the war as a war. But there is a nuance here. It is not clear what we are coming to. Also, the strong point is that we recognize the fact of occupation of our territory at the legislative level. But there is another side to this issue. All these objective findings are relevant to our domestic political justice only. We need to get the Russian Federation recognized as an aggressor and occupier at the international level. In order for the Russian Federation to suffer concrete legal consequences, it is necessary to win cases in international courts. What is happening now in international courts deals not with the occupation, but with the financing of terrorism. Also, the weak side is that, on the one hand, we are abandoning the ATO, but at the same time, it is not clear which regime we will introduce. There is no martial law, even though the bill No. 7163 contains many provisions taken from the martial law regime. This concerns, in particular, the power to limit the rights of civilians to implement specific measures. We have a separate law regarding the martial law regime, but what is envisaged by the new law is not martial law. Hence, a lot of confusion may emerge. This will be some sort of a third regime, details of which have not been settled in practice.

“That is, in addition to the bill No. 7163, we need to adopt a whole bunch of normative acts that would regulate the mechanism of the Operational Headquarters carrying out the military operation. For example, this Operational Headquarters should have local authorities and officials involved in the implementation of these measures subordinated to it. How it will work in practice, nobody knows yet. There is a problem with the definition of security zones. The right to delineate them is given to the Operational Headquarters, but it is not clear how it will be done. We must realize that not everything works smoothly in practice. The definition of the activities of NGOs in those territories can be problematic as well. As we know, there are many volunteer organizations working there. They can get permissions for their activities from a new body – the Operational Headquarters. We do not know yet how well this system will work, but we must think about it now. So far, we see only postulates for the establishment of a new institutional structure. But at the same time, huge legal and organizational work should be carried out. Unfortunately, it seems to me that the abovementioned bill confuses things.”

“I do not understand why politicians use the term ‘the Donbas’ to describe the occupied territories. Responsible politicians should use the accurate term in their statements and comments – ‘the occupied parts of the Donetsk and Luhansk regions.’ Unfortunately, we have seen many people neglect such an important moment. The Donbas includes parts of the Dnipropetrovsk, Donetsk, Luhansk regions of Ukraine and of the Rostov region of the Russian Federation. By using this term, Ukrainian politicians impose it on ambassadors of the European Union nations as well. As a result, we have a lot of confusion, so many people get the impression that this is some separate area called the Donbas. 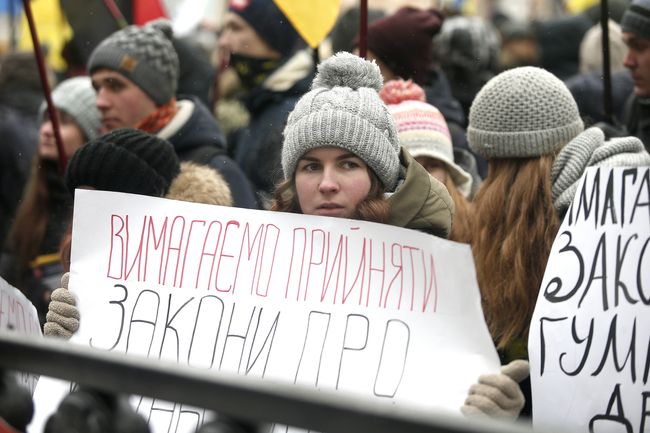 JANUARY 16, 2018. NEAR THE VERKHOVNA RADA. ACTIVISTS OF THE “STOP THE REVANCHE” MOVEMENT DEMANDED THAT IT PASS THE LAWS ON THE DE-OCCUPATION OF THE DONBAS, ON COLLABORATION WITH THE ENEMY, ON THE ANTICORRUPTION COURT, AND ON LANGUAGE AND CHURCH ISSUES

“Regarding the bill, it is difficult to say something about it, because neither our Constitution nor other laws contain norms of direct action. That is, one can adopt the perfect law, but it will still depend on the person who will execute it. We have the implementation problem. As for de-occupation, I have to say that everything that is happening in the occupied territories depends only on Vladimir Putin. Of course, Ukraine must have clear strategy of its own for strengthening its sovereignty. But the fate of the occupied territories, unfortunately, depends only on the Kremlin. There are a number of components in this issue, as we can try to get back our people, our territories, or people along with the territories. Of course, we need to restore our sovereignty, but it seems to me that this country has no clear strategy for this yet.”

“The important point is that the bill No. 7163 clearly defines the legal status of the occupied territories. It turns out that international bodies have already recognized the fact of occupation and aggression of the Russian Federation against Ukraine, but our legislators were in no hurry for some reason. Now there is a complicated problem with the fact that there are many lawsuits pending in courts by people who claim material and moral damages from the state of Ukraine. This is a radically incorrect approach, because Ukraine has not attacked anyone. The source of these damages is Russia. Ukraine is absolutely right to initiate lawsuits against it. We need a legislative framework and clear legal guidelines. Regarding Crimea, we have a law on occupation. As far as the Luhansk and Donetsk regions are concerned, we lacked such a legal framework, which in particular should help both lawyers and diplomats. As is known, the Russian Federation recognizes the fact of the annexation of Crimea, but regarding eastern Ukraine, they keep stating ‘we are not present there.’ Legal principles are very important for us in the struggle against the Russian Federation. In the bill, we equate the occupation of Crimea and the occupation of parts of the Luhansk and Donetsk regions regardless of Russia’s position. At the same time, we must understand that the law cannot prescribe the de-occupation algorithm. This is another domain. The law provides legal principles guiding de-occupation. Meanwhile, the strategy of de-occupation itself should be developed separately and on another level. In the bill as it was passed in the first reading, there were many points that required clarification. The Committee on Security and Defense has done a great deal of work to revise this document. Article 10, which regulates the powers of security forces, even required a dedicated committee meeting. It is noteworthy that some MPs who voted for amendments in the committee suddenly began to oppose them afterwards. This is a weird position. They began to criticize their own work. The problem here is that amendments are voted separately. When some amendments are not passed, their authors then say they will not vote for the bill as a whole.”