Dr. Maksym YAREMENKO on how the noted enigmatic Hetman of Ukraine was remembered in Kyiv in the 18th-19th cc., and how he is remembered nowadays Ukrainian history has been rewritten a hundred times, so that some facts, figures, and events have been lost in the process. Those that have survived are mostly distorted by censorship and propaganda. Hence the historical myths we have been fed for centuries.

After Hetman Ivan Mazepa acted against Peter I of Russia [during the Battle of Poltava], he was anathematized in Russia and the authorities made every effort to erase his name from the next generation’s memory. Did they succeed in erasing his name from Ukrainian memory? Who was Ivan Mazepa in Ukrainian history? Is this rebellious hetman alive in our memories? More on this in the following interview with Dr. Maksym YAREMENKO, Ph.D. (History); Associate Professor, Chair of History, Kyiv Mohyla Academy National University; Senior Fellow, Museum of National History of Ukraine.

Ivan Mazepa’s life story appears to be a set of legends that are hard to believe. In the age of Romanticism, his destiny attracted the attention of a number of European luminaries, among them George Byron, Victor Hugo, Alexander Pushkin, and Juliusz Slowacki. [Save for Pushkin] they portrayed Mazepa as a legendary romantic hero who fought duels and left behind a number of broken tender hearts. However, their stories lack descriptions of Ivan Mazepa as a statesman and outstanding intellectual. Do you think this gap can be filled?

“An answer to your question apparently depends upon who we are talking about. Romanticism is long gone. Professional historians have long stopped viewing Ivan Mazepa as an iconic image. I realize that no one outside my academic field will ever bother reading thick volumes written by professional historians. Russian researcher Tatyana Tairova-Yakovleva’s story appeared in print first as part of Russia’s prestigious Lives of Prominent People Book Series, then as a monograph, translated into Ukrainian. Here Ivan Mazepa emerges as a statesman, rather than an adventurer and Casanova that was so attractive to the Romantics. 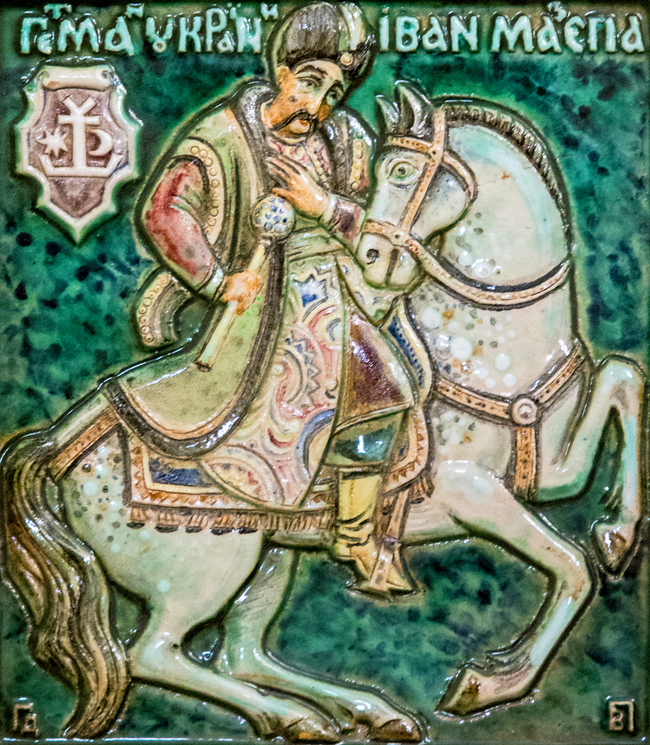 “I think that those who want to learn more about Ivan Mazepa have every opportunity to do so. They can visit libraries and browse the Internet. What bothers me as a professional is a cliche approach to Ivan Mazepa, on the part of researchers and biographers. They seem to repeat each other. Researchers who don’t specialize in Mazepa as a statesman and military leader, but as a cultural figure, come up with amazing discoveries. They can help fill in the gaps in the man’s political activities. There is a paper analyzing Mazepa’s eulogies, where he is compared to the Sun or Moon. This is topos, but who was chosen as its target at the time? Polish kings were. Contemporaries said Ivan Mazepa was a sovereign ruler.”

You mentioned the cliche approach to Mazepa. Could the reason be that we still don’t know the main facts concerning his life? Many still see him as a traitor, not as a Ukrainian hero.

“Ivan Mazepa is still regarded by some as a traitor, but one must consider the environment, the Russian empire at the time, its imperial relations with Ukraine. In that environment Mazepa could be regarded only as a traitor. In fact, he would’ve been condemned under the Soviets. Soviet ideology inherited that of the Russian empire and added social aspects, portraying Mazepa as a rebel who also breached the allegedly unbreakable friendship between the Russian and Ukrainian peoples, which friendship Ukrainians had allegedly always sought. He was further portrayed as an exploiter hetman who came close to enslaving the peasantry.

“My impression is that there are small circles here in Ukraine, within which Ivan Mazepa is hated even more than he was during the imperial period, in the 19th century. I mean certain church quarters in the first place, like the Kyiv-Pechersk Lavra Monastery of the Caves, a big religious domain run by the [Kremlin-controlled] Russian Orthodox Church. They have published a large number of guidebooks meant for the unsuspecting pilgrim, written and edited on the premises. Booklets dating from the late 18th century contain a concise history of the Ukrainian capital’s places of religious interest, stressing where homage should be paid. There are many such places in Kyiv that are associated with Ivan Mazepa. As Hetman of Ukraine, he generously contributed to a number of religious construction and renovation projects, including cloistered communities. These guidebooks mention the fact that, starting in the late 18th century, some or other structures were built with Ivan Mazepa’s money, including the Lavra’s walls, the Church of All Saints, and the Vestry of the Dormition Cathedral. Remarkably, Hetman Ivan Mazepa is mentioned only as a contributor/benefactor, without referring to his political affiliation, without attaching any tags.”

IVAN MAZEPA WAS MENTIONED EVEN WHERE THIS WAS UNWARRANTED

The Hetman State in Ukraine consisted of the starshyna Cossack nobility, rank-and-file Cossacks, burghers, peasants, and clergy. Which social strata supported Mazepa and why?

“The Cossack community grew and matured. They wanted the kind of political culture they knew well: that of the Polish Kingdom (Rzeczpospolita), although some researchers refer to steppe/nomad practices. That culture was essentially different from that of Muscovy. In Rzeczpospolita, even when electing king, certain agreements had to be made with the attendant responsibilities and obligations – something unheard of in Muscovy. Bohdan Khmelnytsky faced a conflict when signing the Treaty of Pereiaslav, considering that the Cossacks were required to swear allegiance to the Russian tsar and the latter was not required to reciprocate. I think that the Cossacks failed to comprehend that Muscovite political culture. De jure, all Cossacks, all the way from top to bottom, had all political rights, after the Rzeczpospolita aristocratic standard. De facto, they were divided into the nobility (starshyna) and the rank and file, so that an ordinary Cossack could never dream of becoming a starshyna man, not even on the middle level. 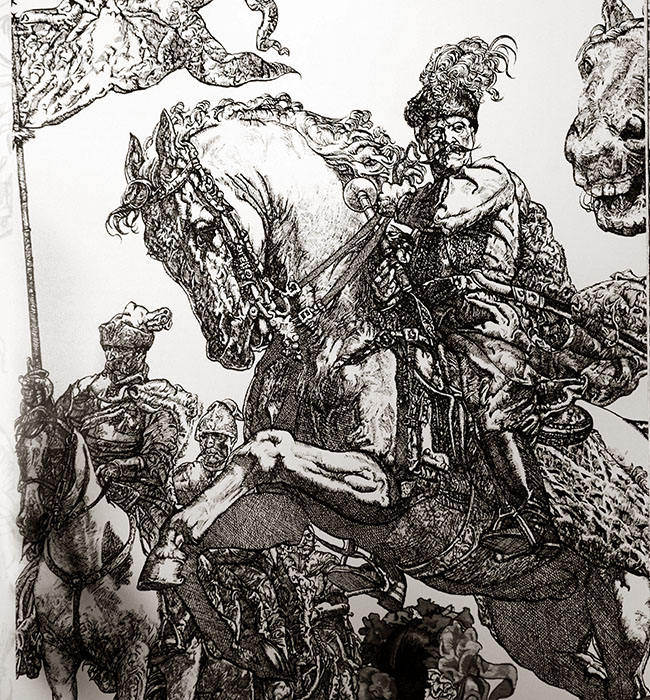 “After Ivan Mazepa rebelled against Peter I of Russia, the latter’s Chancellery started issuing orders. As in any propaganda campaign, some facts were rigged, like about Mazepa allegedly deciding to bring the Hetman State back under the Polish crown, and that this would be followed by the Roman Catholic Church persecuting the Eastern Orthodox Church in Ukraine, involving Polish Catholics and even Swedish Protestants. What followed was a war of decrees, letters, and ukases. The notion of otchyzna (Ukrainian/Polish for homeland/fatherland) was part and parcel of Cossack culture at the time. What they understood as otchyzna was the territory under the Cossack Host’s control. At best, the hetmans wanted to have all Russian lands under control (including those under Rzeczpospolita’s control, heretofore part of the Kyiv Eastern Orthodox Diocese). The notion of otchyzna is often encountered in conjunction with the hetman’s powers. Peter I of Russia was quick on the uptake, stressing in his ukases addressing Ukraine that Ivan Mazepa had turned traitor to their Fatherland.”

There are many stories about Ivan Mazepa and Motria, his love. Any comment?

“Love story, indeed. It adds credence to Ivan Mazepa as another human being, considering that we are accustomed to seeing some of our historic figures as monuments, where you can only come to place flowers. Often some of them lose what human features they have, so that what is left is only ‘black and white,’ whereas human beings can’t be described that way. It is interesting to note the way Ivan Mazepa treated his love, in his twilight years. He wrote good poems – a sure sign of intellect at the time. Several Russian versions of these poems are still available. One of them is about falling in love, being an old man, to the effect that gray hair and beard prove no obstacle when falling in love with a young beauty…

“Getting back to the subject of whether the hetman would be remembered by his posterity. He is still remembered, but in different ways. His image has been ruthlessly distorted over the years. When those who wanted to erase his image from history realized they couldn’t, they would resort to unpardonable falsifications. Ivan Mazepa could only be portrayed as an antihero in tsarist and Soviet Russia’s ideologies, but there are references, on and off the record, concerning his contributions to religious projects.”