A “present” on the anniversary of Donald Trump’s presidency Recently, namely on the night of January 20-21, the so-called government shutdown began in the US, as federal government departments and institutions temporarily suspended their activities due to lack of funding. Interestingly, this event coincided with the anniversary of President Donald Trump’s tenure as head of state. On this occasion, he wrote on Twitter: “This is the One Year Anniversary of my Presidency and the Democrats wanted to give me a nice present. #DemocratShutdown.” The Democrats, for their part, have blamed the resident of the White House for the shutdown and offered their own hashtag #TrumpShutdown, which instantly gained more popularity than the presidential one.

Let us recall how the events developed. On January 18, the House of Representatives of the US Congress approved a continuing appropriations resolution that would have funded the nation’s government until February 16, but the Senate was unable to vote it into law the next day. They needed 60 votes to pass the bill. The Republicans had only 51 seats in the Senate, and John McCain was absent, so they needed the Democrats’ support to ensure the bill getting the required number of votes.

The consequences of the shutdown were felt instantly. In particular, the Statue of Liberty was closed to visitors on the weekend, and the White House press office stopped responding to calls. Also, US federal agencies stopped working.

It should be noted that the current draft continuing appropriations resolution is already the fourth such bill during the Trump administration. The last resolution on this issue was passed at the end of December 2017, and it expired at midnight on January 20. Now the government can fund only the most necessary spending.

The budget dispute between the Democrats and Republicans concerns defense spending and the construction of a wall on the border with Mexico, which is envisioned to cost 18 billion dollars. In particular, the Democrats insist that defense spending should not increase in proportion to other budget items. Meanwhile, the main reason for the refusal of many Democrats to support the continuing appropriations resolution is the lack of measures to protect from deportation about 800,000 illegal immigrants who entered the US as minors.

Let us recall that in September last year, President Trump instructed the government to terminate Barack Obama’s program that aimed to protect the young immigrants known as the DREAMERS, who entered the US illegally as children with their parents and do not have the appropriate documents.

On January 21, President Trump sharply criticized the Democrats and even proposed to change the voting procedure to get the government back to work. “The Dems just want illegal immigrants to pour into our nation unchecked. If stalemate continues, Republicans should go to 51% (Nuclear Option) and vote on real, long term budget,” he wrote on Twitter. 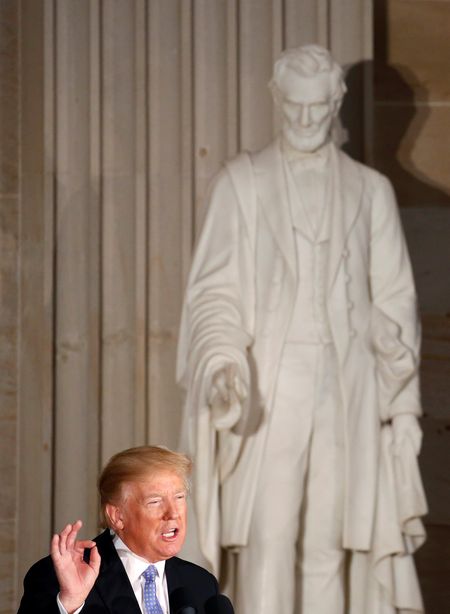 However, such a proposal was almost immediately rejected by the Senate Republican leader Mitch McConnell. According to the Voice of America, McConnell has scheduled the vote on a new funding bill which will allow the government to function until February 8 for 1 p.m. on January 22 (or, if possible, for an even earlier time). However, the Democrats, despite the Republican objections, keep insisting on the inclusion in the bill of a provision protecting from deportation about 800,000 young immigrants brought to the US by their parents as children.

For his part, the Senate Democrat leader Chuck Schumer called Trump an unreliable negotiating partner. He noted that the two sides came close to an agreement several times only to have President Trump back out again at the urging of anti-immigration conservatives.

The last shutdown in the US took place in October 2013 during the Obama administration and lasted for 16 days. By the way, this is the first government closure in the history of the US to occur when one party controls both the White House and the two chambers of Congress.

The Day asked American experts to comment on the shutdown situation and tell us who was to blame for it and what the way out might be.

“Concerning defense spending, at some point within the next week or two it will become clear which party is suffering more politically from this impasse. Then that side will offer some concession.”

As you know, the Republicans are now accusing the Democrats that the military will suffer through the shutdown. I would like to hear your opinion on this and in particular on how the shutdown will affect the activities of the State Department.

“NOT THE END OF THE WORLD, BUT A PROBLEM”

“The issue revolves around DACA (The Deferred Action for Childhood Arrivals), a program that permits the long term stay of children who had illegally immigrated to the US with their parents. Trump wants it eliminated or enforced as a short term program, Democratic wish to protect it.

“The president can negotiate and seek compromise but feels that he is in a stronger position when he can blame the Democrats for the shutdown. So this may go on for a while, until polls show who is hurt more from it, Trump or the Democrats. All defense personnel remain on the job, senior State Department officials remain as well. All air traffic control remains in place, as does the work of key institutions like the FBI and CIA.

“These are deemed essential, as is the social security and public assistance system, which remains in place. But Monday most employees in the major ministries will be staying home and will not be paid, though later, they may catch up with extra work days and overtime. I am not sure if the Mueller investigation is considered essential. If it is not, then we may have a permanent shutdown!

“Inspections of new airplanes, licensing of new projects, etc. – all will end and a backlog will occur. But the country will be defended, as will embassies. Federal passport offices will close down, but a small subset of personnel will handle passport and visa processing as serious backlogs develop.

“So, it is not the end of the world, but a problem the longer it goes on.”