A life divided by war The Den correspondents planned to visit Verkhniotoretske, Yasynuvate raion, Donetsk oblast, once they set out to the east. The ATO forces’ defense line passes… right through the village. It was very important to personally see in what conditions people live in a partially occupied village and what their mood is. Three streets – Chervona, Zarichna, and Vyshneva – still remain under militants’ control. Incidentally, people registered in Verkhniotoretske are free to cross the “border,” which we think helped locals not to lose contact with their kinfolk “on the other side” just a few hundred meters away and, at the same time, caused some serious problems, such as smuggling and “bush telegraph” propaganda.

Villagers themselves call Verkhniotoretske a long-suffering village. Indeed, there has been a great deal of shelling and ruining here since the hostilities began. Official statistics alone says that the militants’ fire has destroyed at least 250 buildings, including a kindergarten, a school, a church, the village hall, and other infrastructure, leaving 15 civilians dead and as many people wounded. About 500 locals have left their houses for safer places since the war broke out.

“It is very frightening to live in a frontline village,” says a woman in a local store, where volunteer Anna Dombrovskaya hands out Den free of charge. “There are a little more than 2,000 residents here, including about 250 children. Earlier, before all these events, shellings, and seizures, there had been more than 3,000.”

The woman agreed to speak to journalists only on condition that we do not disclose her name. “Each of us here has a brother or a sister ‘over there,’” she says, pointing to the occupied part of the village or, to be more exact, to the outer Ukrainian checkpoint, the last “bulwark” of freedom. “All the people here are scared, so no one will tell you the truth. As for the local mood, I will say: ‘neither one thing nor the other.’ Have you heard this saying? Frankly speaking, many sympathize with Ukraine here. Despite all this nightmare, people understand that the Donbas must come back home and that the peace and stability of the region is possible in Ukraine only, while nobody in the world will ever recognize this ‘DNR.’ But there are also people who do not hide being on the DNR’s side. They are just blindly committed. Whenever their houses are shelled, they only blame Ukraine. If you begin to explain that the shells flew from ‘the other side,’ they still blame Ukraine for failing to ward off the shelling and, in general, for allowing all this horror to happen. People begin to cheer only when they are paid pensions and wages. Once they get money from Ukraine, they stay glad for a week or so, and Ukraine is not so bad then, and fresh meat was at last delivered to the store, and, what is more, there is beer and vodka. But as soon as they run out of money and the situation worsens again – something banged somewhere and put somebody down, – the whole village clamors again that the ‘cursed Ukraine’ allowed this to happen.” 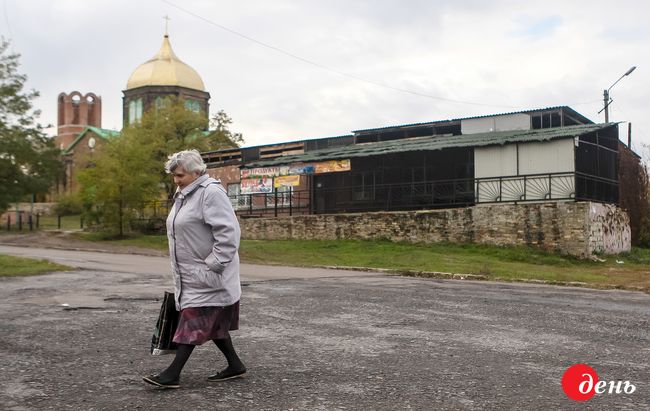 Our conversation was very short – six minutes only. Then we saw some local young guys begin to gather here in the store, looking askance at us. Seeing this, the woman got embarrassed. She apologized and moved quickly towards the exit. She said quietly, almost whispering in our ears: “If you want to know the real picture, don’t speak Ukrainian to the locals or this will set them against you.” Then, in the doorway, she added loudly and firmly, for everybody to hear: “What’s the life like in here? You’d better ask the young ones, let them tell you” and went out.

“And what can we say?” the guys murmured when we approached them. “No work either ‘here’ or ‘there.’ And they shoot very often – you can’t make out which of them, they all keep shooting.” And they went out after the woman. We followed them, being afraid for some reason that the guys might have a go at the woman for speaking with journalists. But our interlocutor and the guys went in different directions.

“Are you really from a newspaper? From Kyiv to us?” asked one of the guys, who looked 25 or so, with an open bottle of beer in hand. He had just appeared God knows where from. Inviting me to take a sip, he continued: “Nobody will tell you anything here because it’s clear: there’s a war going on. You’d better ask the driver – he carries people to the ‘civilization’ under gunfire” (the boy in well-worn track pants stressed the word “civilization” for some reason). “Petrovych, tell the correspondent what life is like down here.”

We were not sure that the taxi minibus driver was really named Petrovych, but we still asked him how often Verkhniotoretske residents maintain a link with what the guy calls “civilization” and whether it is safe. 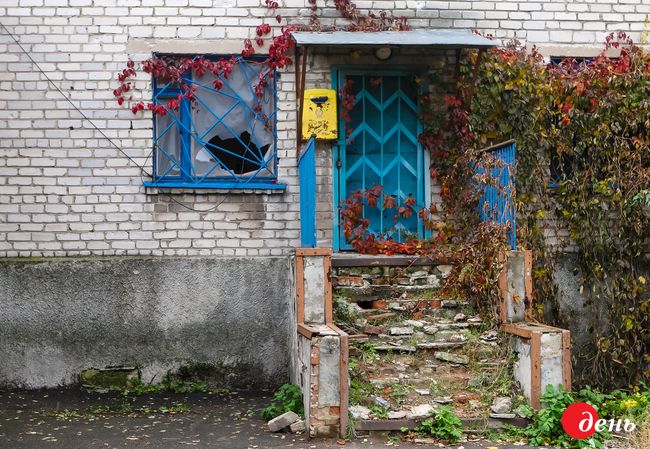 THE VERKHNIOTORETSKE POST OFFICE HAS BEEN CLOSED SINCE 2014. LOCALS ARE SAYING VOLUNTEER ANNA DOMBROVSKAYA IS IN FACT THE ONLY ONE WHO MAINTAINS A LINK WITH “GREATER UKRAINE” BY DELIVERING THE NEWSPAPER DEN TO THE VILLAGE ONCE A WEEK. BESIDES, THE “SPECIAL MESSENGER” HAS CALLED FOR COLLECTING UKRAINIAN-LANGUAGE BOOKS FOR THE LOCAL SCHOOL AND KINDERGARTEN. JOIN IN!

“I drive to Ocheretyne at 7:30, 10:10, 13:30, and 16:30. There’s also a minibus to Kostiantynove. Tell you what: it would be unfair for people to complain about transport. Although passports and migration permits are carefully inspected at checkpoints, people can go to a hospital or a store, apply for or collect pension, or turn to the police. It’s OK with this,” the driver says succinctly, as if reporting, and turns away demonstratively. “And did he say I was shot at? Luckily, they never hit me. But other drivers got into all kinds of situations in the previous years. It’s a war, you know…”

After speaking with the driver, we walk down the Peace Street – a very symbolic name at the present time. This street is the shortest way from the village to the war. 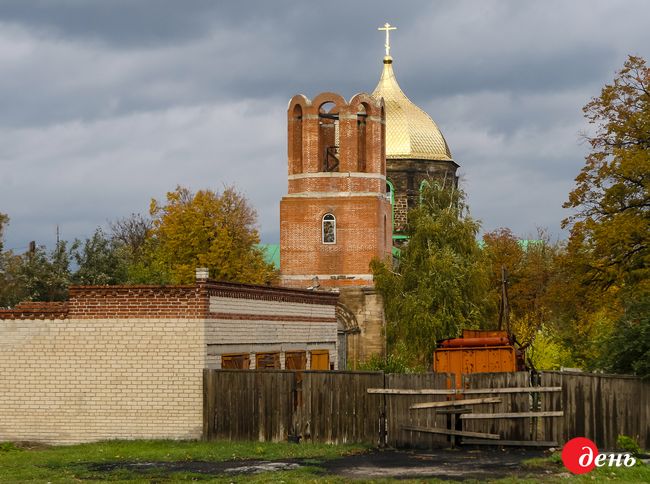 “The local post office has been closed since 2014. They stopped delivering mail regularly right after the first shellings. They must be afraid,” says a pensioner woman with a Den in hand, who caught us up. “You don’t need to photograph. I’m no model. But I always take and read your newspaper. We come to know the news either from the newspaper or from television if reception is good. We, in my house, have a good choice – Russian, Ukrainian, and even ‘DNR’ channels. As you know, all who are registered here are free to walk ‘there,’ although the military sometimes ask how long we are going to run there and back. They resent us, as if we were traitors. But I have a sister there. So should I repudiate her? I go there once a month in order not to come too often into the view of both sides. But they don’t allow my sister to visit me at all. She has no migration permit. Or take this situation: there are young people who study in other cities. They are registered in the halls of residence, but they… are not allowed to visit their parents because they are not registered in Verkhniotoretske and, hence, are to be barred from the ATO zone. Can you fancy a ‘fun’ like this? These young people take some kind of ‘absentee certificates’ and try to make their way to their parents. Or take this: ours are saying: if you don’t have a registration but have a migration permit, you can go through the official checkpoint Maiorsk. In other words, to come to a frontline village, our students from Ukrainian cities have first to find themselves in the ‘DNR’?”

Mingling with the locals, we come to know an interesting nuance: there are two schools in the village, but one of them is on the temporarily occupied territory. And there are parents who send their children daily from the Ukrainian part of the village to… the “DNR” school. Serhii Ivanovych, whom we met on the same Peace Street, says he knows about such instances. “And what’s surprising here? The ‘DNR’ school has never been shot at since the war began, while the Ukrainian school has always been coming under fire – the latest shell landed during the February aggravation of the crisis. People fear for the lives of their children.”

We inquire whether they fear for their education – “DNR” anthems in school, “Motorola” in textbooks as a “hero of Little Russia,” etc.

“You don’t understand, do you? You just came as visitors, took some picture, and went. But people have to go on living under gunfire,” the old man said indignantly and minced on, waving a hand to us.

By Vadym LUBCHAK, photos by Mykola TYMCHENKO, The Day