The Ukrainian Diaspora was founded in Canada 127 years ago. A significant part of the Canadian multiethnic community, it is an intermediary between two powerful nations, Ukraine and Canada. Canadian Ambassador to Ukraine Roman WASCHUK says Ukraine provides Canada with proactive energetic people who are helping to develop Canada. More on Canada-Ukraine partnership and better communications in the following interview.

Sofiia POSTOLATII, Sumy State University: “Hanna Hopko wrote on Facebook that the Crimea Declaration is doubtlessly a historic document, and that the consolidated stand taken by the West in regard to Ukraine is extremely important. The document reads that the United States rejects Russia’s annexation of Crimea and reaffirms Ukraine’s territorial integrity and sovereignty. Mr. Ambassador, how do you personally assess the Declaration and its advantages for Ukraine?”

“The Declaration was adopted timely, making the stand taken by the United States in the matter clear. It’s an opportunity for other [NATO] member countries to reaffirm their non-recognition stand, following in the footsteps of many countries, including Germany and Great Britain. Canada is still sleeping on it, but it will follow suit before long. It’s an opportunity for Ukraine’s partners in the West to combine efforts in combating the occupation of Crimea. Interestingly, it [the Declaration] was issued to coincide with [the anniversary of] the 1940 Welles Declaration [condemning the occupation by the Soviet Union of the three Baltic states of Estonia, Latvia, and Lithuania, and refusing to recognize their annexation as Soviet republics]. This adds more international weight to the [Crimea] Declaration.”

Yana KHROMIAK, Borys Hrinchenko University, Kyiv: “Minister of International Development Marie-Claude Bibeau was shown Donbas as part of her visit to Ukraine (July 18-23). She saw Kramatorsk, Bakhmut (former Artemivsk), Kurdiumivtsi, and the Maiorske Checkpoint. How would you describe your minister’s visit to the so-called Gray Zone of Ukraine? Who came up with the initiative, considering that few Ukrainian politicians have dared visit the conflict zone?”

“We elect only brave individuals as ministers. It was our initiative and it was wholeheartedly supported by the Joint Forces Command. I can tell you that much has been accomplished and that we’re trying to keep up the good job. That five-day-long trip through Ukraine would have been incomplete without her seeing, with her own eyes, what was happening in that crisis area and how our and our partners’ money was being spent to help stabilize the region and keep it under control. I must say that the Maiorske Checkpoint has shown great progress. From what I know, it is being completely rebuilt and will be significantly improved. The Ukrainian side should be credited with better organization and follow-through. We also have Project International Organization for Migration. It is meant to help keep the transition points better informed. We saw that the Ukrainian authorities and their partners had upgraded and simplified the procedures for Ukrainians who side with Ukraine. 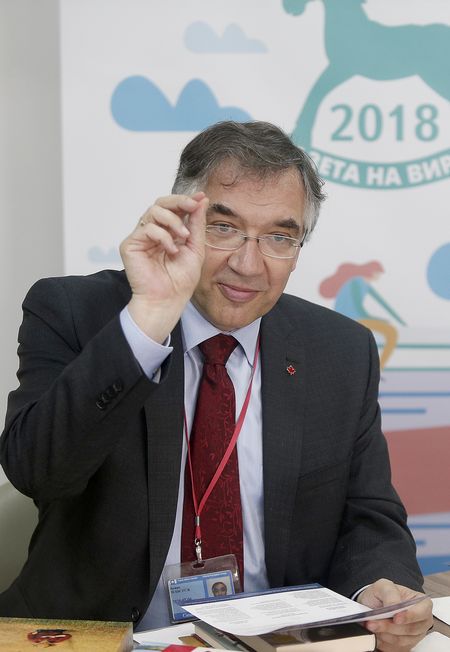 “The villages in the Gray Zone – those we saw – left us depressed. I think they need more attention on the part of the Ukrainian authorities. The Budget Code imposes restrictions on capital investments in the Gray Zone. On the one hand, with reason, considering that the business/facility you invest in may well be destroyed by artillery fire. On the other hand, how can such investments be audited to prevent corruption? Lack of investments makes the local community suffer, what with its ‘suspended’ status. Such situations should be avoided.”

Mykola SIRUK: “Does Ms. Bibeau have other initiatives?”

“She has announced two big initiatives. One is a new call for 30 million CAD preliminary proposals [entitled ‘Growth that Works for Everyone – Inclusive and Shared Prosperity in Ukraine’]. This project is aimed at aiding Ukraine’s problem areas, the role of women in the rural areas, and other groups that aren’t adequately represented economically. The second one is support [worth $4.75 million] of a Women’s Voice and Leadership initiative in Ukraine. Ms. Bibeau said Canada will continue funding our development and security programs in Ukraine, without a military component, and that amounts to some 50 million CAD.”

Ya.Kh.: “Ukrainian Ambassador to Canada Andrii Shevchenko said in an interview that the Ukrainian Diaspora is changing its attitude to Ukrainian realities, particularly stressing that Ukrainians actually respect their language and culture. Is he right or wrong? I mean considering that you have your annual event Miss Ukraine Canada?”

“I’ll never object to what the Ukrainian ambassador to Canada has to say on the matter. As a media man [by profession], he accurately conveys these trends. People – among them individuals of non-Ukrainian parentage – are being very active, supporting and showing empathy for Ukraine and what’s happening there. A festival was recently held in Ottawa, one of the local Top 3 annual events. A similar event took place in Toronto as one of Canada’s most expensive public projects. I think that this is proof of Ukrainian heritage being actively shared with fellow Canadians, rather than merely trying to preserve it or share one’s nostalgia. The reason is that the Ukrainian Canadian community boasts a long 125-year-old-plus history, being part and parcel of our state.”

Ya.Kh.: “Is it true that the Ukrainian embassy in Canada is an initiator and/or co-organizer of such events?”

“It is an active co-organizer. I think that the ambassador and his wife, both media people, understand the role played by culture. It is necessary to combine diplomacy with other activities, such as addressing the Canadian public as broadly as possible.”

Khrystyna SAVCHUK, Taras Shevchenko National University, Kyiv: “August 1 marks one year since the signing of the Canada-Ukraine Free Trade Agreement. What are the CUFTA advantages and shortcomings, in your opinion?”

“CUFTA has certain advantages for Ukraine, compared to previous years. Canadian statistics point to 27-30 percent growth in Ukraine’s exports to Canada. This is a tangible increment. Our exports last year were down in terms of coal and steel products, but the statistics are lower this year. In contrast, non-coal and resources exports are on an upward curve, with the lists of goods being extended by both sides. Businessmen hear about exports opportunities, so they give it a try, one or two shipments. We’ve launched a pilot Ukraine-Canada export project. Together with Ukrainian experts, we selected five sectors: furnishing, footwear, textiles, confectionery industry, and IT. 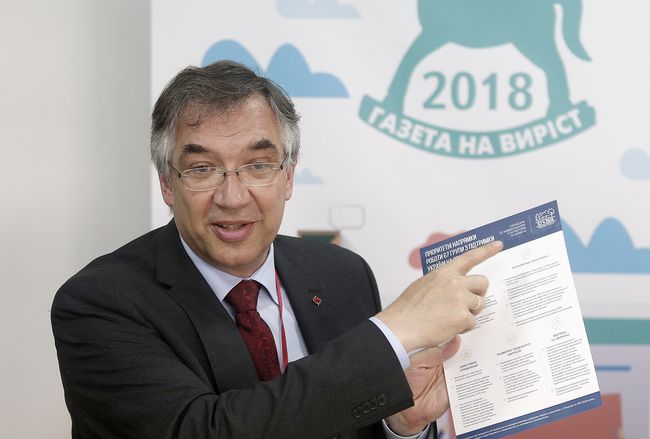 “IT is actually an invisible sector whose scope is superior to that of all exports put together. It is categorized as ‘Services,’ but this fails to embrace the freelancers and firms that keep operating on the market. I mean, it has a great development potential.”

LOOKING FOR UNITS WISHING TO EVOLVE

Olha KRYSA, Ivan Franko National University, Lviv: “This year Ukraine and Canada signed a military cooperation agreement. What does it spell for both countries?”

“It provides for combined military training and cooperation in the military and technological spheres. Such training continues and keeps expanding. Three years back, it was just the Yavoriv Training Center, located not far from Lviv. Today, Canadian servicemen are stationed in 12 localities across Ukraine. The contingent remains the same, though reorganized. We’re looking for units/institutions that want to strengthen. We don’t look at a map/chart and point to a locality at random, to send personnel there. We want commanding officers who will support the reform effort – like those at the Military Academy of Odesa and the Desna Training Ground where our [joint] exercises took place. We’re very glad to have Lieutenant-General Michael Rouleau in charge of the Canadian Joint Operations Command and Outdoor Troops. He’s acquainting himself with the new command. Apart from the agreement on military and technological cooperation, there was the decision on weapons exports to Ukraine, made in December. Currently, this matter is being negotiated by companies and institutions. With any luck we hope to see some positive results later this year.”

Anastasiia KOROL, Vasyl Stus Donetsk National University: “Canada was among the first to recognize independent Ukraine. Your country has been upholding cultural projects, including documentaries reflecting the early phase of our national independence effort. What about the current cultural cooperation between Ukraine and Canada?”

“That’s a very good question, but may I pose one in return? Who is there [in the audience] prepared to write a review on a literary work? I have four books on me and I’ll be happy to leave them for you to keep after the interview. There is a noticeable growth in the [bilateral] cultural contacts, and some of them are nonstandard – I mean, they do not necessarily involve the Diaspora, but have to do with contemporary culture. We’ve started negotiating an agreement on filmmaking and audio/video cooperation that will be signed before long.” 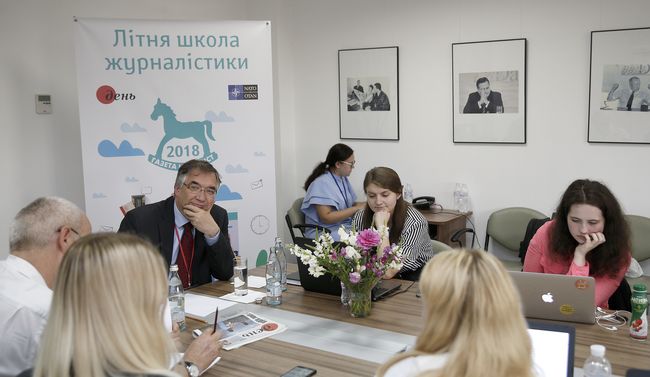 O.K.: “What is Ukraine as seen through the eyes of the Canadian in the street? Does the Canadian public at large know what is happening here?”

“Let me answer the last one, whether Canadians know about what’s happening in Ukraine. I always tell people who’re visiting Ukraine that it is sometimes difficult to figure out what’s actually happening here, considering that it’s hard for the Ukrainians, too. It’s a process in the course of which each is trying to figure out the situation. Canada is one of the few countries where practically no one needs to be told who Ukrainians are and what they’re all about. Various delegations have seen this, saying in the end: ‘We don’t need any further education forums.’ The Ukrainian Canadian community is made up of people whose family roots are in Ukraine. People have a positive attitude to this community and [appreciate] its contribution [to Canada], but this attitude doesn’t necessarily extend to Ukraine. The Ukrainian embassy is doing well, lending a hand to the construction of this ‘Acceptance Bridge.’ There is a great deal of sympathy for Ukraine, but one must work to add current realities to Ukraine’s image as seen by Canadians. Their attitude is positive, but they need more content re Ukraine. Historically, immigrants from the west of Ukraine were numerically superior, so that people now have a vague idea about the Hutsul or Kherson regions. This is where the Ukrainian embassy steps in. Our Canadian embassy is working for the good of all of Ukraine, just as our Ukrainian counterpart in Canada is working for the good of the Diaspora and the rest of the country.”