“A bomb went off in Brussels, but nobody noticed it”

Mykhailo HONCHAR on why he thinks that the prospects of the Southern Gas Corridor, which is intended to strengthen the European Union’s energy security, are bleak The Trans-Anatolian Natural Gas Pipeline (TANAP), which will transport gas from Azerbaijan to Turkey and then to Europe, was opened at a ceremony in the Turkish province of Eskisehir.

“Today is an historic day. The TANAP project is an outcome of multilateral cooperation as well as of political will. It is especially gratifying that we are launching it ahead of schedule. It will be Europe’s largest gas pipeline. We are planning to make the first delivery of gas through this pipeline to Greece in June 2019,” Turkey’s President Recep Tayyip Erdogan said, commenting on the opening of TANAP.

In addition to Erdogan, President Petro Poroshenko of Ukraine, President Ilham Aliyev of Azerbaijan, President Aleksandar Vucic of Serbia, leader of the Turkish Republic of Northern Cyprus Mustafa Akinci, energy ministers of several countries, and top executives of energy companies, also attended the ceremony. Incidentally, Maros Sefcovic, Vice President of the Commission for the Energy Union, was conspicuous for his absence, although TANAP is part of the Southern Gas Corridor whose main objective is to strengthen the European Union’s energy security and reduce dependence on gas supplies from Russia. 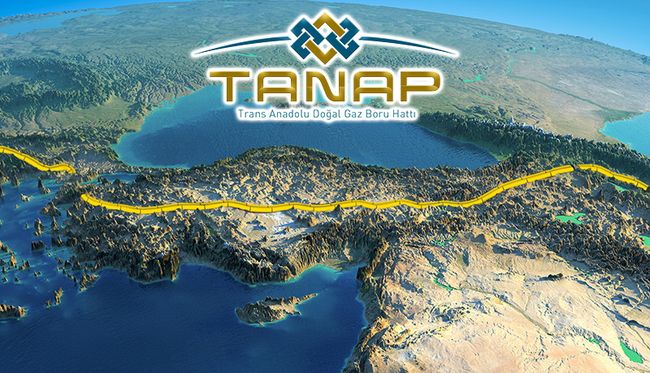 “It is energy security, also for our state, as well as competitiveness and diversification of gas supplies to Ukraine,” President Poroshenko tweeted. He emphasized that Ukraine hopes to receive TANAP gas through Bulgaria and Romania.

It will be recalled that Azerbaijan and Turkey made a deal to build this gas pipeline in June 2012, after which Ukraine expressed a desire to take part in the construction, but Azerbaijan announced soon after that it was not interested in this. 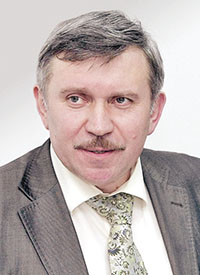 The Day spoke with Mykhailo HONCHAR, president of the Strategy XXI Center for Global Studies, about TANAP’s prospects and role in the energy security of Ukraine.

“Although ‘a red ribbon was cut’ yesterday in the Turkish province of Eskisehir, the prospects of this natural gas supply corridor are rather bleak and remote.

“The point is there is a marked difference between the concept and the present-day shape of TANAP and the Southern Gas Corridor as a whole.

“Firstly, it will be impossible to reach the rated capacity immediately. Moreover, the current negotiations show that TANAP can ensure gas supplies to Turkey only. Europe is out of the question so far, for this requires the construction of the Trans-Adriatic Gas Pipeline, on which Azerbaijanis are working now. But it will carry Azerbaijani gas to southern Italy.

“Besides, the Azerbaijani State-Run Oil Company, the main project implementer, aims to supply about one billion cubic meters of natural gas to Bulgaria.”

What is the place of Ukraine in these plans?

“We are not present at this stage. And not only we.”

Then what was the subject of Poroshenko-Aliyev negotiations?

“They discussed prospects. Remote prospects. Ideally, if things go as planned, Ukraine will use this corridor of Azerbaijani gas supplies after 2025 – on condition that Azerbaijan increases gas production. It is another important moment.”

No less important is the Russian factor – to be more exact, the Kremlin’s opposition to non-Gazprom gas pipelines. To what extent is it likely that Russia may hinder carrying out the Southern Gas Corridor project?

“The total supplies of Azerbaijani gas to southern Italy will be a meager – by the European market’s yardstick – 10 billion cubic meters. This pales in comparison with the 450 billion cubic meters the European market consumes annually. But while TANAP is still in its infancy, Russia is already saying there should be Russian gas from the Turkish stream in the Trans-Adriatic Gas Pipeline in accordance with the EU’s Third Energy Package. What is the Jesuitical essence of Russia’s move? It torpedoes the Third Energy Package by all means, but in this case it is trying to push its gas into the Azerbaijani gas pipeline, taking advantage of the European law.

“And I am not sure at all that the 10 billion cubic meters of natural gas, which are supposed to reach southern Italy, will be of Azerbaijani origin from the Shah Deniz gas field. Most likely, Russia will pressure Azerbaijan, and there will be a 50-50 ratio in the pipeline.

“Russia is doing its best to minimize the supplies of non-Russian gas to the European Union. It is being assisted in this matter by such countries as Germany, Austria, and France, which, ‘for some reason,’ pay no attention to non-Russian gas supplies. Take, for example, Azerbaijani gas. They knew it would come! They even drew up the Nabucco project for this purpose on the initiative of an Austrian company. But, ‘for some reason,’ Nabucco ‘died,’ giving way to a Turkish project. But, ‘for some reason’ again, neither the Austrians nor the Germans are saying, as our President Poroshenko is, that they would be glad to receive Azerbaijani gas. They are not saying that it is necessary to build a system of convectors or even a new pipeline, as part of the TANAP project, so that this gas could run not to the ‘blind alley’ called southern Italy, an agrarian region without any major industrial consumption, but to Baumgarten in the center of Europe [Baumgarten has one of Europe’s three largest gas distribution centers and is an international gas trade hub. – Ed.]. In this way, this gas could also reach Germany. But both the Germans and the Austrians remain tight-lipped about this option.”

In other words, you are saying TANAP could be an alternative to Nord Stream 2?

“Quite right, although it would be more exact to say: the Southern Gas Corridor, which is a project and a top priority of the European Union, is an alternative to both the Turkish Stream and Nord Stream 2, while TANAP is its basic part – 31 billion cubic meters.

“The total capacity of the Southern Gas Corridor is 60 billion cubic meters. But it will only be worthwhile to reflect on the possibility of this when the project of transporting Turkmenian gas across the Caspian Sea gathers momentum.

“This is part of the original idea. The Turks also want TANAP to transport Turkmenian gas.

“But Russia strongly opposes this, and Azerbaijan is not exactly interested, frankly speaking, in having a rival in the shape of Turkmenian gas. The reason is clear: Turkmenistan is the world’s fourth largest depository of natural gas after Iran, Russia, and Qatar.”

What did you mean when you said “for some reason” three times, when explaining why the leading EU countries do not support the gas pipeline projects initiated by the EU?

“Gazprom has managed to corrupt the European Commission. The ample proof of this is discontinuation of the inquiry into Gazprom’s abuses on the European market, which was launched in 2011. We know that Gazprom came through unscathed on May 25.

“I said as far back as 2015: a bomb went off in Brussels, but nobody noticed it. This abortive inquiry caused a scandal.

“It is a victory of Russian gas corruption in Brussels and of corruption in the capitals of major EU member states which have miraculously forgotten about European priorities, including Nabucco which has even been officially closed, but enthuse over the Russian-backed South Stream and Nord Stream 2. Hungary is actively examining the possibility of supporting the second stage of the Turkish Gas Pipeline. The same applies to Bulgaria, whose president and premier suddenly paid official visits to Moscow in the course of one week to meet Putin. Following this, Putin condescendingly told the Bulgarians that the second stage of the Turkish Gas Pipeline will be called Bulgarian Gas Pipeline.

“In principle, there is nothing strange about Bulgaria, for, out of all the EU countries, it may be called the one most affected by post-Soviet corruption. Unfortunately, it has not yet pulled out of that quagmire.

“Hungary is also, in principle, a phenomenon of post-Soviet corruption.

“But the countries that are trying to teach us how to live – Germany, Austria, and France, – three refined countries of Western Europe, are forgetting their European priorities. Well, if you love Russian gas streams so much, why don’t you recall the option of supplying Turkmenian gas to Europe through Russia, using the Ukrainian gas transportation system? I think the only answer is corruption.”

As you regard gas and its supply routes as a geopolitical security factor rather than an economic category (a marketable product), I cannot help asking you about your personal opinion of Angela Merkel’s position on the impossibility of Russia’s reinstatement in the G8 elite club. Why does Germany behave so contradictorily: the “green light” to Nord Stream 2 and the “red light” to Putin in the G8?

“The answer will sound rude and perhaps even vulgar. Germany was paid for supporting Nord Stream 2 but not for Russia’s reinstatement in the G8. As the Americans say, ‘it’s nothing personal, just business.’

“I don’t mean the chancellor personally. But we know very well that in such countries as Germany the position of the topmost leader is of paramount importance, even though, on the whole, the policy of Germany is the sum of the influences of various actors. Those who are now running the show there are oriented to Russia in terms of not only business, but also political relations.

“We are going to see Russia activate behind-the-scenes contacts with G7 leaders in order to gain support not only from Italy and the US for the return of Putin to the negotiating table.

“The Kremlin needs support from European heavyweights in this matter. Bu it is either France or Germany, or, still better, both of them. That’s why the Russians activate their Moscow-Paris and Moscow-Berlin lines. The arguments are predictable: ‘You in Berlin and Paris have always favored dialog, even in the difficult times of the Cold War, and dialog is the format of the Group of Eight.’

“Frankly speaking, G7 decisions are absolutely ‘impotent.’ We already felt it last year, when a communique on increasing sanctions against Russia was announced. So what? Only the US and the UK expanded the list of sanctions. What is more, Britain did so only after the Skripals were poisoned. The rest of the countries were, on the contrary, speaking of easing the sanctions in spite of what Russia was doing. Putin deserves being brought to the Hague-based International Criminal Court for war crimes and crimes against humanity for the 2016 Aleppo bombing alone.

“I am sure the Russians will be mocking at the G7. For Putin said clearly: we did not quit, we were not let in.”