Says Andrii ZINCHENKO, co-founder of NGO Greencubator, launched by TeslaCamp in 2013: “We profess what we believe in. Our entire camp is using alternative energy sources. We’ve put together a microgrid and we’re demonstrating to people how this can be done. This microgrid is a combination of several generators and several consumers. Teamwork often makes solving problem in the energy sphere easier.”

We met when the event took place in Kyiv’s Hidropark (resort area on the left bank of the Dnipro River), in early September. He pointed, saying, “See these SolarGaps solar cell panels? We also have Kripter Domino panels out there, on the beach. On the other side are the guys with the Rotor Sumy system. They got a Climate Innovation Voucher from the EBRD and EU. Their generator uses biomass, they burn wood pellets and get enough electricity to keep them warm and use shower booths.”

There were also wireless chargers and beer brewed using solar energy. There was no disposable tableware, just as I saw no brochures. They were obviously determined to keep evolving on a steady basis, their own way.

Microgrids are the watchword with TeslaCamp this year.

Andrii Zinchenko: “We’ve decided to focus on distributed generation. We’ve been discussing distributed generation, microgrids, turning various small energy solutions into big systems, for almost two years. We’re now in a new energy epoch. We have big generators and power plants, but anyone with an average income can buy photovoltaic panels and generate solar energy. Previously, the energy sphere was like a big orchestra with a conductor. Today, there are energy jazz bands that play their tunes when and where they like. However, all this must be integrated.”

Government-assigned experts and businessmen have discussed the technological and economic preparedness of small businesses to step on the “green path.” 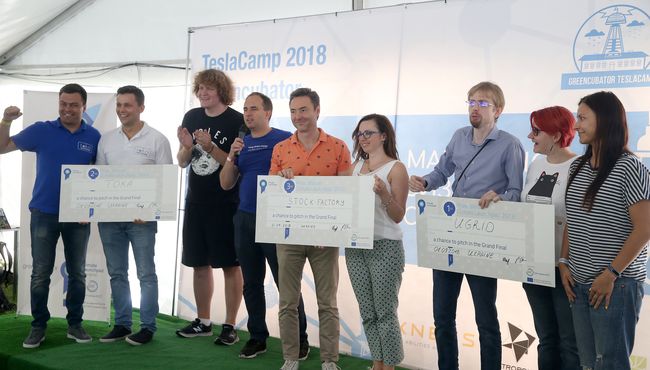 Andrii Zinchenko: “Self-sustaining energy technologies have long been developed to meet their needs. The big question is: Are they prepared economically and on a regulatory level, and will the authorities allow a given business to do that? If so, this business isn’t likely to operate as an isolated entity. Sooner or later, it will join a major power network or start selling electricity. There is also the complicated matter of registration, and so on.”

There is an increasing number of domestic solar energy plants in Ukraine. According to the State Agency for Energy Efficiency and Energy Conservation, there were 244 such plants toward the end of 2015, 1,109 in 2016, and 3,010 in 2017. Andrii Zinchenko says he was told that there were more than 4,000 last month. He attributes this to the good “green tariff” for such domestic installations, as well as to the time-tested procedures. Also, the business aspect: “A farmer of Fasova, a village in Kyiv oblast, installed a separate drip irrigation system with droplet pumps powered by photovoltaic batteries. He also has a diesel generator, but its usage rate is some 10 percent. He did so because installing a line to the nearest energy distribution company would cost a fortune, what with conductor line and supports. And so he did what he did and now he has enough power.”

TeslaCamp’s other priority is encouraging community innovations. Yurii FOMICHEV, Mayor of Slavutych, said during a discussion that paperwork was underway to register Ukraine’s first municipal energy co-op society in his city, and that its purpose was to make Slavutych energy independent. He said they would increase the energy efficiency of the housing stock and budget-sustained institutions, reduce the use of natural gas, and replace it with renewable energy sources.

Mykola Shumskyi, Zhytomyr Regional State Administration, says there is a program for 30 kW domestic power plants. Andrii Zinchenko adds with admiration: “Zhytomyr oblast is in the north of Ukraine, it’s colder there than in Odesa oblast. In 2016, they had about 10 such power plants, then 102 the following year, having actually rewritten part of the municipal engineering program.” 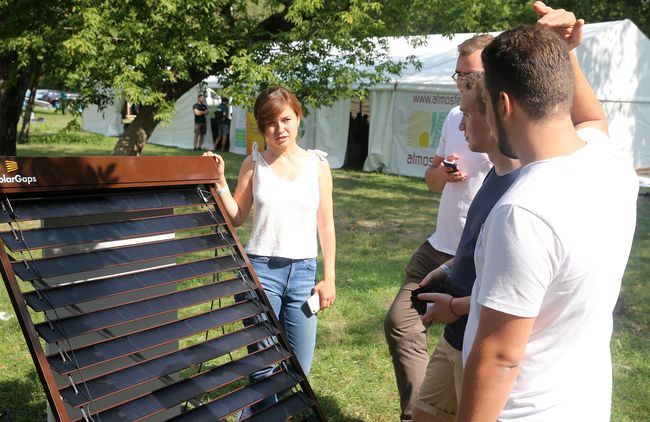 Mr. Shumskyi told TeslaCamp that the local authorities had recompensed 75 individuals for the cost of solar battery installation this year, to the tune of UAH 2.5 million.

Roman ZINCHENKO, co-founder, Greencubator: “We’re working on the setting up of a Green Empire in Ukraine. We have partners, among them ClimateLaunchpad, the world’s largest green business ideas competition. Its finals will take place in Edinburgh this November. There will be hundreds of contestants from 45 countries, including a Ukrainian team. Last year our team was in Top 10 of the ClimateLaunchpad Grand Finals with its Go to U charging network developed in Lviv. There are over 200 such stations operating in Austria, Poland, Ukraine, Georgia, Kazakhstan, and Thailand.

TeslaCamp hosted the ClimateLaunchpad National Finals. Three Ukrainian projects were selected for the finals in Scotland. The third place went to Stock Factory, a platform for manufacturers and realtors that helps quick sale and transfer of goods with a short shelf life. A good alternative to waste recycling/disposal. TOKA, a network of charging stations that can be integrated into old and new structures, placed second. UGrid, a project installing microgrids based on conventional ones, complete with soft- and hardware, placed first.

“We tried to glimpse the future, with all cars being driven by electric engines, when they’ll have to be serviced. We tried to imagine the energy transport system and the number of charging stations,” says UGrid founding father Pavlo REPALO. He adds that intensive laboratory tests are underway, and that the UGrid team hopes to God the Ukrainian energy market will be deregulated next summer, for this will allow to launch an Electricity Internet.

This Green Empire, if and when, will have room for all. Andrii Zinchenko points to the so-called gadgetization of the energy sector: “Our Dutch partner said that there is a company in the Netherlands that leases out solar panels for €40.00. Many believe it to be a technological company, but it’s actually a financial business. It’s the world’s biggest rental housing operator, yet they occupy – probably rent – just one office. The name is Airbnb. Or take UBER, the biggest peer-to-peer taxi cab, food delivery and transportation company. None of them owns a car.”

Mr. Zinchenko says each businessman in Ukraine should pay attention to the variety of new business models, considering that the energy sector will change: “I’d also advise one to carefully study the Ukrainian legal and regulatory framework. There are lots of things that can be done and that aren’t envisaged there.”

By Mariia PROKOPENKO, photos by Mykola TYMCHENKO, The Day