A new round in the Gongadze-Podolsky case On November 16, the High Specialized Court of Ukraine for Civil and Criminal Cases held the second hearing on appeals against the sentence passed against Oleksii Pukach over his role in the Gongadze-Podolsky case. These first two hearings dealt with organizational issues so far. Still, the latter of them has uncovered new facts that lead one to believe that the trial court panels involved were at the very least unfair, and sometimes engaged in overt manipulation in this high-profile and nationally important case.

“Pukach’s lawyers today informed the court that the High Qualification Commission of Judges had answered their request regarding the current state of investigation into procedural violations committed by Pechersky District Court Judge Andrii Melnyk. The commission said that it decided to terminate the disciplinary proceedings against Judge Melnyk on September 28, 2016 because of the Verkhovna Rada resolution passed on September 8, 2016 which dismissed Judge Melnyk as he reached the age limit of 65 years. However, the judge is actually younger than me by at least 20 years, and I am still four months short of 65. It is unthinkable. Let me remind you that the proceedings against Melnyk commenced due to him falsifying the verdict in the case of assault on Oleksandr Yeliashkevych, while not informing the victim that his case was being considered. Imagine it: Yeliashkevych learned about the sentence in his case five years after it had been passed. Besides, Melnyk completely violated many procedural rules in the trial of Pukach, including those prescribing openness, transparency, admission of the victim to the trial (he barred Podolsky from it), and safeguarding the latter’s rights. Melnyk effectively ejected the victim out of the trial. Thus, Melnyk’s dismissal as Pechersky District Court judge allowed him to avoid responsibility through stopping the disciplinary proceedings against him. But it also means that all hearings in the Pukach case were tainted. 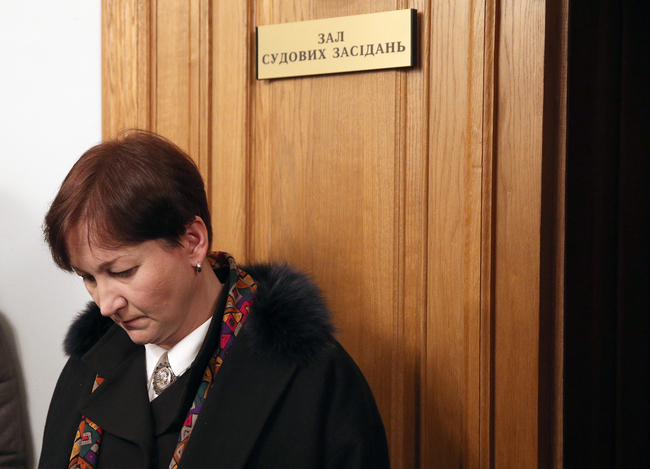 OLEKSII PODOLSKY, WHO IS A VICTIM AND A PARTY TO THE CASE, DEMANDS THAT VALENTYNA TELYCHENKO BE REMOVED FROM THE PUKACH TRIAL / Photo by Ruslan KANIUKA, The Day

“Today’s hearing in the Court of Cassation offered us all an opportunity to hear once again that unlawful pressure had been applied to Pukach in order to shift the blame away from Leonid Kuchma. Pukach was being pressured into not naming Kuchma in his testimony to the investigators and during the trial. We all heard how many ‘messengers’ visited Pukach, who came from the KGB (I just cannot bring myself to call this agency the SBU in this case, as it had nothing to do with Ukraine’s security), the prosecutor’s office and other services, all to force Pukach to shut up. That is why the Pechersky Court held closed hearings without recording them, so as, firstly, not to record Pukach’s testimony, and secondly, to prevent the victim from asking Pukach any questions which would have been inconvenient for the nation’s political elite, like that regarding Kuchma, Volodymyr Lytvyn, and others. We know that according to the Melnychenko tapes, they could and ought to appear in the case as the crime’s instigators. Thus, it was an attempt at total falsification of the findings and investigation in the Pukach case. Concerning Pukach himself, he may be a very bad man, but the investigation has not laid out the role of each participant in the crime: who directed them all, who strangled the victim, who held him down and so on. An in-court exchange between Podolsky and Pukach makes one think that nothing has been clarified.”