At the very beginning of its aggression against Ukraine, Russia chose a criminal and cynical tactic of the so-called hybrid war. A hybrid war itself comprises a large number of components both on the local level (in hostilities, when “little green men” or collaborationists are used to create the myth of a civil conflict) and on the global one – in the political sphere. The hybrid approach allows Russia to manipulate public opinion as well as legal aspects. For example, since the summer of 2014, the Russian media have been describing the militants’ mortar attacks on civilians as “crimes of the junta against their own people.” Even the victims of these attacks often believed that they were under the Ukrainian armed forces’ fire. Then, on the border with Russia, the Ukrainian citizens who were leaving the war zone were invited to fill up forms, in which they described the situation in favor of the aggressor.

But this war has seen a lot of direct attacks on Ukraine not only from the occupied territories, but also from that of Russia proper. These facts were recorded and submitted to the International Criminal Court (ICC) in The Hague. They prove who is really guilty of the bloody events in eastern Ukraine since 2014.

Truth Hounds and International Partnership for Human Rights (IPHR) presented last Thursday a report, “Attacks on Civilians and Civilian Infrastructure in Eastern Ukraine,” which was handed over to the ICC Prosecutor on December 18, 2017. It is the human rights organizations’ second report to The Hague on Russia’s war against Ukraine. The report covers artillery, heavy and light infantry weapon attacks that amount to war crimes and have taken place in eastern Ukraine since 2014.

But there is another problem: according to experts, the International Criminal Court does not deal with interstate conflicts. It is in its competence to investigate war crimes as such against civilians. And it does not matter to the ICC which side of the conflict has committed a crime.

“The point is that the state of Ukraine fell victim to Russian aggression,” Anton KORYNEVYCH, Candidate of Sciences (Law), Associate Professor at Kyiv Taras Shevchenko National University’s Institute of International Relations, explained to The Day. “Russia has been the greatest violator of international law since World War Two. It is obvious to all of the civilized community. But international humanitarian law in respect of military conflicts is written in such a way that it is equally applicable to the military of the aggressor and the state that fell victim to aggression,” Svitlana VALKO, member of the board of NGO Truth Hounds, added in her turn that their goal is to explain these juridical subtleties to the Ukrainian military command.

Yet it should be noted that it was difficult to avoid mistakes at the beginning of the Russian aggression, when the Ukrainian army was in fact being reborn and the Russian invader had an advantage in the initiative and military capabilities. From the very outset, the aggressor chose the tactic of a “living shield,” which, oddly enough, Vladimir Putin himself once admitted in a well-known statement: “We will be standing behind the backs of their women and children.” 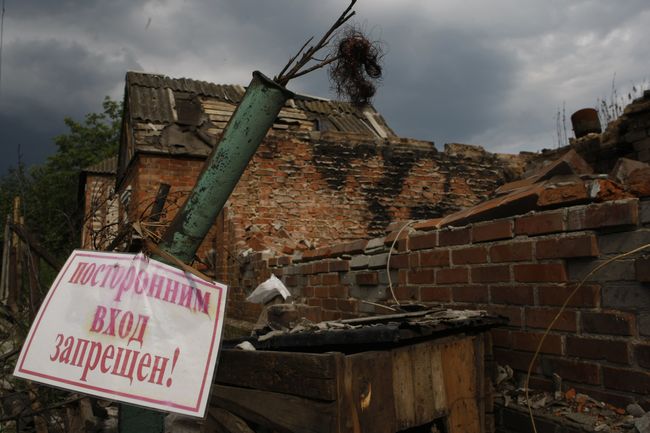 Photo by Artem SLIPACHUK, The Day

Nevertheless, the abovementioned report comprises quite a wide range of testimonies which, according to Roman AVRAMENKO, Truth Hounds documenter of war crimes, are undergoing verification from at least ten sources (questioning eyewitnesses and servicemen, studying the materials of other investigators; examination of shell holes, remnants of projectiles with serial numbers; photography, video recording, satellite pictures, etc.). This approach allows ICC representatives, who cannot take part in the collection of evidence due to a shortage of experts, to use the materials collected by human rights advocates more amply in investigations.

Here are just some of the recorded facts of Russia’s attacks on the territory of Ukraine in the period of fiercest battles, when the Ukrainian army was successfully liberating cities from the invader.

A video of shelling Ukraine from the territory of Russia was made public on July 16, 2014. As the National Security and Defense Council (RNBO) reports, the borderline village of Marynivka was shelled from Russia on July 17, 2014. On the same day, there was a Grad MLRS attack on Chervonopartyzansk form Russia. A few days later, on July 21, Ukrainian army positions in the vicinity of Chervonopartyzansk were fired at from the village of Panchenkove on the border with Russia. The positions near the village of Kumachove were also shelled from Russia. On July 22, militants, supported by Russian artillery, carried out an offensive. Earlier, at the beginning of July 2014, the village of Zelenopillia was shelled from Ruissia, which left 19 servicemen dead and 93 wounded. Attacks of this kind were launched almost daily throughout the summer of 2014 and prevented the Ukrainian military from surrounding the enemy and finishing the ATO.

On September 1 to 4, 2014, a Russian BM-30 Smerch MLRS carried out a strike on the former headquarters of the Operational Command North located 50 km away from the Russian border near the village of Pobieda, Novoaidarsk raion. The remnants of its rockets were found all around the place. The attack on September 3 killed at least 17 servicemen of the 27th Rocket Artillery Regiment.

It will be noted that these are just a few of the recorded and undeniable facts of attacks that convincingly expose Russian crimes and the Kremlin’s guilt. As soon as July 27, 2014, the US published their satellite images that confirm the facts of shelling Ukraine’s territory with Russian Grads. Shortly before, on July 24, 2014, US State Department Acting Spokesperson Marie Harf stated that, apart from supplying multiple launch rocket systems to pro-Russian militants (collaborationists), Russia’s armed forces began to carry out artillery strikes against the Ukrainian military from the territory of Russia.

In addition to official statements, a number of independent investigations were conducted (in particular, by the Bellingcat inquiry center), which confirm the attacks not only in the vicinity of Amvrosiivka, Savur-Mohyla, Zelenopillia, and Dovzhanskyi, but also in the front’s southern sector in the vicinity of Novoazovsk.

Almost a year ago, Bellingcat made public the results of a comprehensive investigation which found at least 149 positions from which the Russian artillery fired and another 130 positions which are very likely to have been used for the same purpose. They identified 408 (!) areas on the territory of Ukraine, which were subjected to shelling.

Therefore, the Ukrainian side and international institutions have sufficient evidence to clearly pronounce Russia an aggressor and invader which must be held fully responsible for unleashing a war in the center of Europe.