The legendary physicist and popularizer of science died on March 14 It is impossible to speak about Stephen Hawking as a scientist alone. In a 2011 interview with the British newspaper The Guardian, the scientist admitted when asked if he was afraid of death: “I have lived with the prospect of an early death for the last 49 years. I am not afraid of death, but I’m in no hurry to die. I have so much I want to do first. I regard the brain as a computer which will stop working when its components fail. There is no heaven or afterlife for broken down computers; that is a fairy story for people afraid of the dark.”

By the way, another individual who defined his era, Albert Einstein, was born on March 14. Also, American universities celebrate that date as Pi Day, because a widespread version of it looks like 3.14. However, Hawking himself would probably have been skeptical about looking for such coincidences, so it is better to just recall his life’s events.

Hawking was born in 1942. He graduated from the University of Oxford as young as 20 and began to study theoretical physics. He suffered from a motor neurone disease (affecting nerve cells that provide motor coordination and maintenance of muscle tonicity), which manifested itself for the first time when he was 21. It is called amyotrophic lateral sclerosis, complications of which, most likely, killed him. The well-known Ice Bucket Challenge campaign was aimed precisely at raising funds for studies of this incurable rare disease. 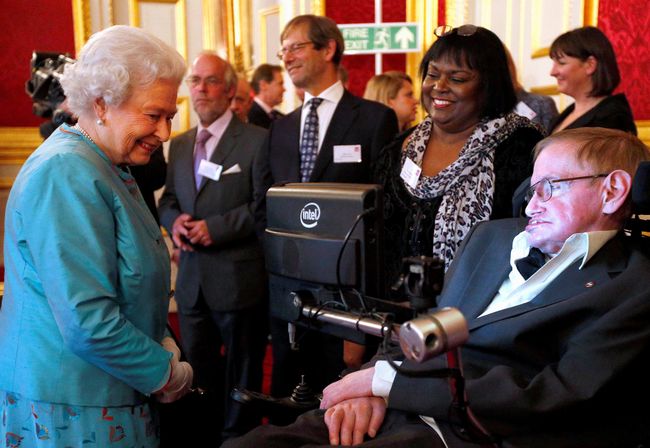 According to what open sources tell us, the disease initially manifested as slight clumsiness and unexpected falls. But over time, it progressed. Hawking himself said: “Although there was a cloud hanging over my future, I found, to my surprise, that I was enjoying life in the present more than before.”

Despite his condition, Hawking occupied the Lucasian Chair of Mathematics at the University of Cambridge for 30 years. Three centuries before, this position was occupied by Isaac Newton, while in the 1830s, it was held by the inventor of the first program-controlled computer Charles Babbage, and more than a hundred years ago, it was occupied by the Nobel laureate Paul Dirac.

Many people are now sharing on the Internet their thoughts about the role of the environment for Hawking’s self-fulfillment. For example, the Russian prose writer Marina Palei wrote on Facebook: “In general, the fantastic completeness of his [Hawking’s. – Ed.] self-fulfillment is a clear display of the advantages of the Euro-Atlantic system. I use the word ‘advantages’ instead of ‘humanism,’ since in the Western countries which do not indulge in vague preaching, humanism is not driven by self-serving talk about God, but by reasonableness. Reasonableness is humanism. And now, let us imagine the existence of this man in ‘the country of dreamers, the country of scientists.’ Without any doubt, with such a serious condition, he would have spent his life tormented by helplessness, poverty, and humiliation – fortunately, it would not be long, at all – and never surprise either Russian statistics nor Russian society.” Unfortunately, the situation would not be very different in Ukraine, where erecting ramps or installing Braille signs for the visually impaired is presented at times as an achievement comparable with the discovery of a new galaxy.

Hawking’s own studies concerned primarily cosmology, that is, the science dealing with the Universe and the place of humankind in it, and quantum gravity. Black holes greatly interested him as well. For instance, the scientist showed that the black holes ‘evaporate’ when affected by the phenomenon which was named the Hawking radiation. Meanwhile, in July 2004, he presented a report which set out his own approach to solving the paradox of the disappearance of information in a black hole. The scientist expressed the opinion that the black hole distorted entrapped information, but did not destroy it without a trace.

The scientific community’s perception of Hawking’s research varied and was sometimes quite skeptical. For several years, Hawking and the American theoretical physicist Kip Thorne on the one hand, and the California Institute of Technology’s Professor John Preskill on the other, were engaged in a controversy over the theory of black holes.