“Steinmeier must convey to the Kremlin that ‘enough is enough’” This week, as many as two representatives of the German political elite are visiting Ukraine – namely, Federal President Frank-Walter Steinmeier on May 29-30 and Federal Foreign Minister Heiko Maas on May 31-June 1.

President of Ukraine Petro Poroshenko said that during a face-to-face meeting with his German counterpart, they discussed the issues of bilateral cooperation, the situation in the Donbas, the deployment of a UN peacekeeping mission there, details of the implementation of the Minsk Agreements, and the release of Ukrainian hostages. “We emphasize the need for an immediate release of Ukrainian servicemen, Ukrainian activists and volunteers held in the occupied territory as well as political prisoners illegally held in the occupied Crimea and prisons of the Russian Federation, including Oleh Sentsov, Roman Sushchenko, Volodymyr Balukh, and many other political prisoners,” he said. Poroshenko also emphasized that his government was making every effort to persuade European partners that Nord Stream 2 was “an absolutely political rather than an economic project.”

“In 2014, the annexation of Crimea, and then the conflict in eastern Ukraine were some very difficult events. But from my point of view, this is an indication that the German-Ukrainian partnership has grown much closer and more successful during this time,” said president of Germany Steinmeier. He stressed that the German government wanted the reform process in Ukraine to continue, in particular in the fight against corruption, and expressed hope that the active negotiations would lead to the Normandy format getting more active again. Regarding Nord Stream 2, the German president said: “You should not accuse us over it. After all, when speaking about Nord Stream 2, we are talking about the future and security of Ukraine as well.” According to him, his country was making an effort to ensure the transit of natural gas through Ukraine. “Ukraine’s greatest concern, I mean the fear that it will cease to be a transitor in the future, is a groundless worry,” he added.

Maas, who came to lead the German diplomacy in March, used his first speech in this position to condemn the illegal annexation of Crimea by Russia and its ongoing aggression against Ukraine. At the same time, the newly appointed head of the Foreign Ministry repeatedly called on the Kremlin to enter dialog, while not denying the need for sanctions against the Russian Federation. In particular, the thesis about the need to maintain and strengthen dialog with Russia was put forward by General Secretary of the Social Democratic Party Lars Klingbeil during a meeting of its presidium. He stressed that the SDP was ready to dismantle the sanctions only in the event of Russia adhering to the Minsk Agreements, and was quoted as saying that by the DW. 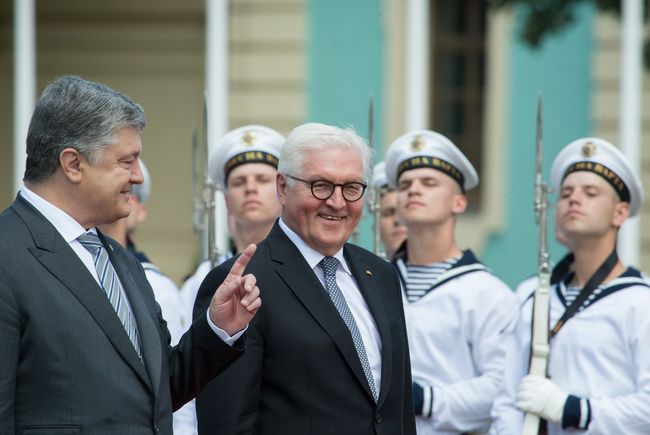 In a comment to Ukrinform, Ambassador of Ukraine to Germany Andrii Melnyk explained that Steinmeier, in addition to Kyiv, would also visit Lviv, thus marking the close European affiliation of Ukraine and its cultural proximity to Germany, while Maas would visit the east of this country and spend a day in the vicinity of the frontlines to intensify efforts to end the military invasion of the Russian Federation. According to the ambassador, this visit “is the clearest possible signal of personal support for President Petro Poroshenko and the reform efforts of the national leadership and government.”

The Day turned to the Chairperson of the Verkhovna Rada Committee on Foreign Affairs Hanna HOPKO for comments on the importance of Steinmeier’s and Maas’s visits to Ukraine.

“OUR WORRIES WILL BECOME GROUNDLESS WHEN GERMANY ABANDONS NORD STREAM 2”

“It is very important to get the Germans speaking with one voice on a peaceful settlement of the situation. Following the understandings that were reached in Aachen and the visits of the presidents of Germany and France to Vladimir Putin, it is important that the Ukrainian side is informed and any steps are agreed with us beforehand.

“Recently [on May 28. – Ed.], a 15-year-old girl was killed in a shelling in Zalizne near Toretsk. Therefore, it is important for us to get pressure on the Kremlin strengthened and to see some real steps in that direction. I say so because the preparations for a Normandy format meeting at the presidential level should have some focus, concrete steps, and real implementation, as opposed to how it was in 2016, when there was a meeting of leaders in the Normandy format, where they talked a lot about the security component and it being a top priority, but afterwards, we have seen daily shellings continuing, and no ceasefire agreements being honored, including those for September 1, 2017 and the Easter armistice.

“As a former foreign minister and a figure who has many contacts, participated in the Minsk format talks and understands that it is Russia that does not honor its part of the agreements, Steinmeier should use various communication channels to convey to the Kremlin that ‘enough is enough.’

“The issue of Nord Stream 2 is also important. There are a lot of lobbyists inside Germany and around Steinmeier himself who show understanding for such economic projects, jeopardize Europe’s energy security, and undermine unity within the EU. It is important that the Ukrainian side, which includes representatives of Naftohaz, is able to convey that the only compromise solution regarding Nord Stream 2 is preventing it, imposing a total ban on that project. We need to state that we will not be satisfied with 30 or 40 billion cubic meters per year. After all, our system conveyed to Europe 93 billion cubic meters of gas last year, and this was the highest figure in a decade, while our capacity stands at almost 150 billion a year. That is, our gas transmission system is still underutilized. We must put pressure on Putin to allow gas from Turkmenistan to reach the EU and look for diversification of supplies.”

How would you comment on Steinmeier’s words that Ukraine’s concern that it will cease to be a transitor in the future is a groundless worry?

“We lose not only soldiers but children as well on a daily basis. The girl named Dasha died yesterday, while a 13-year-old boy died a week or two ago. Therefore, our worries will become groundless when Germany abandons Nord Stream 2. Otherwise, it reminds us of Putin’s promises and his so-called ‘adherence’ to the security component of the Minsk Agreements.

“As for the reasons behind the German government’s marked attention to their Ukrainian counterparts, Germany clearly understands its strategic role in making peaceful progress. After Putin’s reelection, it is important to finally force him to the negotiating table and bring about specific improvements. In addition, Germany is well aware of the extent to which the issue of Nord Stream 2 divides the EU, since Poland, the Baltic States, and the Visegrad Four nations oppose it. In addition, we have had many joint projects launched with support of the German-Ukrainian Chamber of Commerce. Germany has been helping a lot in eastern Ukraine. Therefore, in addition to restoring territorial integrity and sovereignty, resolving the situation in Crimea and achieving a peaceful settlement in eastern regions, there are also issues of economy, reforms, and German support for decentralization.”