About the peculiarities of the general election campaign in Italy In less than two weeks, namely on March 4, a general election will take place in Italy, which is expected to deliver no clear winner. According to opinion polls, the chief contenders for the leading position are three political forces: the center-left coalition led by the ruling Democratic Party, the center-right coalition, and the Five Star Movement. However, none of them will be able to form a government on its own. Thus, no one can predict at the moment what the next government of Europe’s fourth economy will be like and more importantly, what policy it will conduct in the EU.

The Chamber of Deputies, which is the lower house of the Parliament of Italy, consists of 630 members elected by direct and general vote. Out of them, 12 members represent overseas Italians. Another member is elected by the autonomous region of Valle d’Aosta.

The Democratic Party (PD). The ruling party of Italy, formed as a result of the merger of the parties of the Italian communists, socialists, and Christian left. These are traditional social democrats with center-left views.

Free and Equal (LeU). Another alliance created by left-wing parties that broke off from the Democrats during the crisis of the Renzi government. Compared to the PD, this alliance has more pronounced socialist and progressive views.

Lega Nord/The Northern League (LN). A regional party of the northern provinces of Italy which traditionally uses harsh nationalistic rhetoric. Previously, it advocated the independence of Northern Italy, and now supports increased autonomy for the regions and federalization of the country. 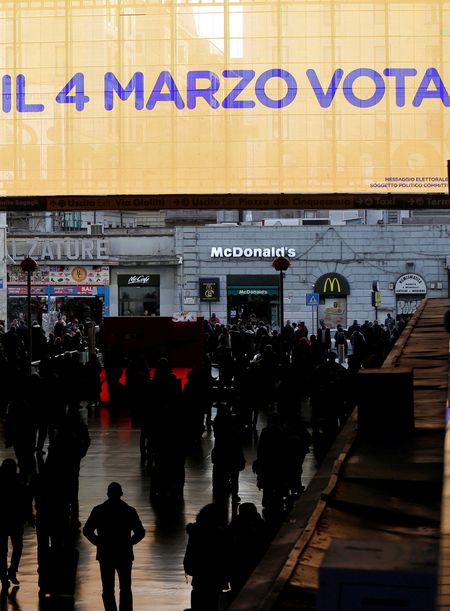 Brothers of Italy (FdI). A national conservative party and the result of a rebranding of sorts undergone by the far-right Italian Social Movement, which some political analysts consider to be close to neo-fascism.

According to the Italian media, the most high-profile promises include the deportation of 600,000 refugees and the opening of closed brothels which would be taxed. After analyzing the programs of the parties involved in the election, the publication Politico in the article “Italian Election Pledges: Pizza or Pazza?” described these unrealistic promises with the word pazza, which means “crazy” in Italian.

The Democratic Party promises to reduce corporate income tax for both small and large companies from 24 percent to 22 percent. The center-right coalition also wants to cut the corporate income tax and abolish the tax outright for low-income enterprises. Berlusconi, who is called the king of electoral promises, has also pledged to abolish housing tax, inheritance tax, and road tax. In addition, he promises to cut taxes on pet food.

The Five Star Movement promises to make those who earn less than 10,000 euros exempt from paying tax, reduce the rate of income tax, and drastically cut the regional taxes paid by companies.

The Democratic Party promises to give families 400 euros a month per child for three years, and tax deductions of 240 euros per child until they turn 18. In addition, it wants to set the minimum pension at 750 euros a month, up from around 500 euros at present.

The center-right coalition plans subsidies for families proportional to the number of children. Forza Italia is promising to hike the minimum pension to 1,000 euros a month.

Almost all political forces stand for a tougher immigration policy. In particular, the Democratic Party plans to reduce migrant flows to Italy through bilateral agreements with the countries of origin and bring to a halt EU funding for countries like Hungary and Poland that have refused to take in any refugees.

The center right is united in its call for a tougher stance on migration. Forza Italia and the League want to reintroduce border controls, block refugee arrivals, and repatriate all migrants who have no right to stay in Italy, as well as impose stricter criteria on granting migrants humanitarian protection.

The Five Star Movement supports increasing the number of police and strengthening border checkpoints. They also call for immediate repatriation of illegal immigrants.

The Democratic Party supports creating a position of the Eurozone economy minister, the introduction of joint Eurobonds to finance the single currency bloc and the direct election of the European Commission president. At the same time the party wants to lower Italy’s debt pile from 132 percent of GDP to 100 percent over a 10-year period.

Berlusconi’s Forza Italia is mostly pro-EU stance, while the League remains firmly Euroskeptic. According to the latter party’s manifesto, Italy should leave the EU unless it changes its fiscal rules.

The Day asked Yevhen PERELYHIN, Ambassador of Ukraine to Italy, to comment on the peculiarities of the election campaign in that country.

“There are two weeks left before the general election in Italy, but nobody can predict what its results will be. Due to the fact that 10 million voters have not yet determined who they will cast their votes for, the renowned researcher Antonio Noto believes that ‘it will take a prophet to predict the results of the election.’ The future government coalition will depend not only on the number of votes the united right or the alliance of the left forces will gain, but also on the amount of support for this or that individual party.

“Since February 19, the publication of opinion polls has been forbidden, which is why we will know about the decisive votes of these 10 million voters only after the voting is completed. The importance of taking into account votes of those voters who have not determined yet where they stand is also evidenced by the results of the anti-system Five Stars Movement in the most recent election. During the last two weeks before the voting day, the party was able to increase its support level by 5.5 percentage points.

“As of mid-February, consolidated data from nearly a dozen different opinion polls point to the right-wing alliance of four parties being in the lead with 37.2 percent of support. Within this coalition, Berlusconi’s party Forza Italia has 16.5 percent, the League (formerly the League of the North) stands to get 13.8 percent, the Brothers of Italy 4.6 percent, and the Us with Italy party has 2.8 percent.

“At the same time, the center-left coalition, headed by the ruling Democratic Party, can get 28 percent, while the Five Stars Movement vote is projected at 27 percent. Thus, if we proceed from the present figures, none of the three forces will receive enough votes to form a stable majority in the country’s parliament. This means that there is a huge opening for future agreements both within the center-right or center-left alliances and between different parties.

“Another feature of the election campaign that deserves our attention is separatist and anti-European calls becoming less frequent: for instance, the leader of the League Matteo Salvini has stated that his political force no longer adheres to separatist views. ‘Since the League of the North is now a national movement, we are no longer seeking independence for Italy’s northern regions. Now we are federalists and autonomists who will advocate strengthening the rights of the regions.’ At the same time, leaders of the Five Stars Movement have said they will no longer insist on holding a referendum on the participation of Italy in the single European currency project.

“The decline in the proportion of overtly radical forces in the Italian political arena probably reflects a decrease in the popularity of such slogans with the Italian voters, the overwhelming majority of whom are not inclined to see Italy outside the EU.

“The ability to defend national interests on the world stage, ensuring the stable growth of the Italian economy, addressing complex social issues, and promoting EU reforms in Italian-friendly ways (primarily in the migration and financial spheres) are the main topics that will determine both the content of last days of the pre-election debates between the leading political forces and the results of the general election.”