On 4 April 1949 in Washington DC, United States of America, twelve nations signed a treaty that would for sixty nine years preserve peace and stability in the North Atlantic area.

When our forefathers came out of the two world wars, twenty years apart, they realized that the world will not survive another war of such devastating dimensions.

According to the signatories, the essential purpose of the North Atlantic Treaty is to reaffirm their faith in the purposes and principles of the Charter of the United Nations, to safeguard the freedom, common heritage and civilization of their peoples - founded on the principles of democracy, individual liberty and the rule of law – and to prevent war through the creation of conditions under which resort to war is clearly disadvantegeous. Its basic principle is that an armed attack against one of the members is an attack against all.This principle of the collective defence clause was enshrined in Article V of the treaty and is now famous as the cornerstone of the Alliance, together with the other two tasks of the organization, namely crisis management and cooperative security through tailored partnerships. 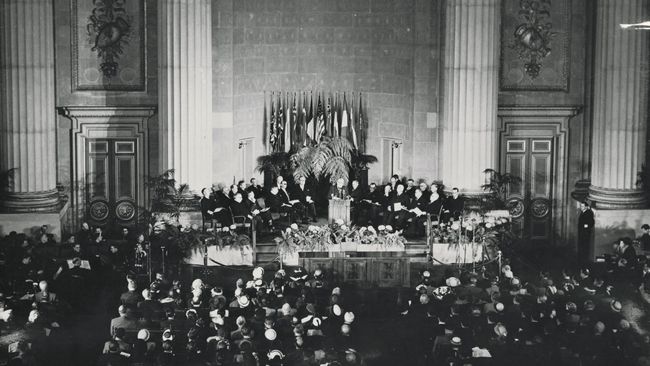 US President Truman, in his opening speech on the 4th of April 1949 meeting, described the Alliance in a simple but powerful way – „What we are about to do here is a neighbourly act. We are like a group of householders, living in the same location, who decide to express their community of interests by entering into a formal assocation for mutual self-protection.“

Over the following sixty nine years, this neighbourly community has grown from twelwe to twenty nine households willing to support each and stand by each in order to preserve peace, stability, and well-being in the North Atlantic area.

As the world changed, old security challenges dissapeared and new appeared, yet NATO stood by its fundamental principles and values and continued to act upon its core tasks.

These principles were used in the creation of NATO’s symbol – a four-pointed star representing the compass that symbolizes the right road, the path of peace, and a circle representing the unity that binds together NATO members». The blue background represents the Atlantic Ocean and the circle symbolises unity.

NATO went from  the period of Cold war – from defence to detente, to a period of cooperative security and crisis management around the world, to the twenty first century in which terrorism, hybrid warfare and new geopolitical realities of a ressurgent Russia destablizing the international order have emerged. New problems require new solutions As the current NATO Secretary General, Jens Stoltenberg, has recently pointed out:“The world does not stand still. And neither does NATO. NATO will continue to defend its Allies against any threat.“

On 11-12 July 2018, NATO will hold its 27th Summit. The twenty nine heads of States and Governments who will gather in Brussels this summer, will have the same important task as their forefathers had sixty nine years ago – to take decisions that will renew hope for peace, ensure solidarity, confirm its shared values and ultimately keep all Allies safe and contribute to stability beyond our borders.

Disclaimer: The author’s opinions are personal and do not necessarly reflect NATO’s official position.

Barbora Maronkova is the Director of the NATO Information and Documentation Centre in Kyiv, Ukraine