The press conference held by Foreign Minister of Ukraine Pavlo Klimkin, which lasted for more than an hour and a half and was devoted to summing up the results of the Ukrainian diplomatic service’s work in 2017 and the priorities for 2018, did not leave the listeners any more optimistic about the capacity of that department to strengthen the role of Ukrainian diplomacy in the world.

ON THREE DIMENSIONS OF THE MINISTRY OF FOREIGN AFFAIRS’ WORK

On the one hand, the chief of Ukrainian diplomacy named the successes of the last year: “visa-free travel,” which became “the word of the year in Ukraine,” and “the entry into force of the Association Agreement between Ukraine and the EU as well as important preferences obtained within the framework of the FTA.” However, it should not be forgotten that some Western diplomats have begun to remind our authorities that visa-free travel could be at risk due to Ukraine’s failure to pass the law creating an anti-corruption court.

According to the official, a separate dimension of the Ministry of Foreign Affairs (MFA)’s work is interaction with the North Atlantic Alliance and advancing on the trust funds issue. He recalled that at the NATO Summit in Warsaw, Ukraine had made a major commitment to achieve NATO standards by 2020. In addition, Klimkin stressed that this country had no alternative now to moving towards membership in the EU and the North Atlantic Alliance.

According to the minister, the chief priority of the MFA “has been, and will be this year, maintaining the solidarity of the civilized world and the international community with our struggle against Russian aggression and for our independence and territorial integrity.”

ABOUT THE RUSSIAN SCENARIO OF FEDERALIZATION AND FRAGMENTATION OF UKRAINE

As for the occupied Donbas, the focus is on security and the humanitarian aspect, and we must also prepare for the return of hostages and political prisoners. In addition, we must take care of the conditions which citizens of Ukraine have to endure in the occupied territory now.

Klimkin also stressed that the Russian occupation administration now operated in the Donbas. According to him, during recent talks with Russian Foreign Minister Sergey Lavrov on the establishment of a peacekeeping mission in eastern Ukraine, it became clear that Russia was interested in preserving the Russian occupation administration in the Donbas to keep the region as a Russian colony. Thus, he stressed, Russia was trying to move towards federalization and fragmentation of Ukraine. Such a scenario would definitely never succeed, stressed Klimkin. 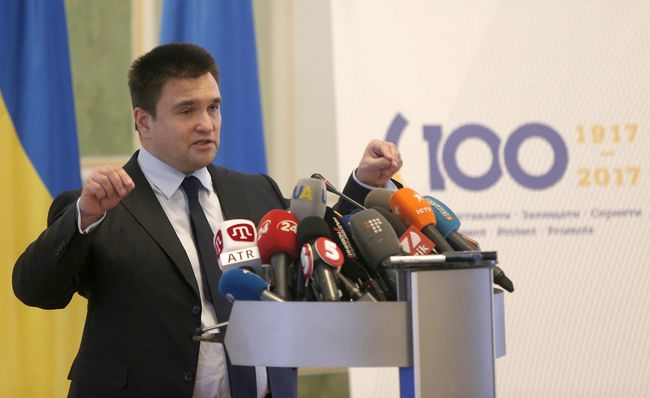 However, he did not mention any new initiatives or approaches to the reintegration of the occupied territories in the east of Ukraine and the return of illegally annexed Crimea. From his words, it has become clear that Ukraine is counting on the US strengthening its sanctions against Russia alone, which is quite likely, but we can hardly expect the EU to strengthen its sanctions, as the number of countries advocating the gradual lifting of sanctions is growing there.

Also, the minister did not provide a specific answer to The Day’s question about Ukraine’s readiness to agree to painful compromises to reintegrate the occupied territories as soon as possible, because the longer Russia will control this region, the harder it will be to return to our state.

He said: “Why have we proposed the concept of a roadmap? Because we understand that we cannot do everything right away, but we need a vision for resolving this issue, including what the UN Security Council decision on peacekeepers will be. We must know what we will be doing and when. And every step must be linked to Russia fulfilling its international obligations. We need to develop this sequence, and in this sequence, there may be some compromises. However, there can be no compromises whatsoever that would entrust the occupation administration with any democratic or quasi-democratic functions. It makes no sense. The only way out is for Russia to get out of the region, and an international component has to enter it and gradually assume all responsibility.”

When asked by The Day whether the ministry needed to listen to expert advice on strengthening the role of the diplomatic service, which should involve developing a comprehensive strategy for strengthening Ukraine’s global standing, identifying priorities for each direction and developing a comprehensive program of support for our export sectors, that is, Ukraine entering foreign markets with our European standards-compliant products, Klimkin said that such a concept existed, and that it was being discussed within the MFA, and they were politically working with different countries. “If we enact some formal document, the situation will not change,” he stressed. On the other hand, Klimkin stated that he opposed the development of a document aimed at promoting Ukrainian export sectors. “I support helping Ukrainian business.”

When commenting on the initiative to move from Minsk to Astana the platform for negotiations on the implementation of the Minsk Agreements, which President of Kazakhstan Nazarbayev announced in Washington, Klimkin said that he saw no sense in changing such a location, since it would not bring any added value.

However, he stressed that the problem of the Minsk platform was that Russia did not make any commitments, and, moreover, distorted all agreements and tried to spread to the rest of Ukraine what they had in the Donbas, that is, an occupation administration.

As for delays in the appointment of ambassadors, and such vacancies number more than a dozen, the minister explained that this situation was due to clear requirements and criteria for heads of diplomatic missions. “An ambassador should not just be a diplomat – that time has long passed – they must be effective in their position. And we will not make any compromises on the quality of ambassadors,” the chief of Ukrainian diplomacy emphasized. He also said that the president would announce the appointment of a number of ambassadors in the near future. However, it is strange to see such an uncompromising approach when there have been no heads of Ukrainian diplomatic missions in a number of important countries for two or three years. For example, we did not have an ambassador to NATO for two years. How did it look like in the eyes of the North Atlantic Alliance, when seen against the background of statements about our desire to become a NATO member? The answer was obvious.

“WE MUST FOCUS AS MUCH AS POSSIBLE ON DEVELOPING A STRATEGY OF STOPPING BLOODSHED...”

Kostiantyn HRYSHCHENKO, a former Minister of Foreign Affairs of Ukraine:

“Of course, visa-free travel is the greatest achievement of Ukraine in the past year, I see the fact that we have not advanced at all in achieving the main objective of our foreign policy – ending the war in eastern Ukraine – as the biggest failure of 2017. And here the main thing is that there is no plan, no consistent and convincing work with our partners. Apart from the UN platform, we have not used other opportunities to advance our position and demands.

“Secondly, I believe that the economic component has moved sharply down on the list of priorities of our foreign policy department’s work as a whole. This is especially true in relations with non-European countries.

“Thirdly, I see as a major shortcoming the unjustified delay in initiating a thorough preparation of lawsuits for the restoration of the rights of Ukraine as a state and its citizens whose interests were harmed as a result of the annexation of Crimea and Russian aggression in eastern Ukraine.

“The fourth shortcoming is the lack of systemic approach in the MFA, a striking example of which is offered by the large number of vacancies some of which have stayed unfilled for years. In particular, Kazakhstan and Switzerland are striking examples of this. We still have not canceled the famous decree of 2003, which allows the Presidential Administration, and not the president himself, to delay appointments, including those of counsellors, based on their own wishes. There is no justification for this. And this all affects the motivation of the diplomatic corps and its effectiveness. And, accordingly, the shortcomings of last year are the main challenges for this year. We must focus as much as possible on developing a strategy of stopping bloodshed and transitioning to a political stage in solving the issues of recovering the uncontrolled territories, and keep Crimea in mind while doing that. We need to engage in active professional work with international courts and other departments and reenergize our activities in influential international structures, first of all in the UN, where we have ceased to be a non-permanent member of the UN Security Council which remains an important area of activity.”