March 18 became a rather significant and telling date, both in Ukrainian politics and in foreign affairs. On the one hand, Vladimir Putin’s “election” for another six-year presidential term reflects the obvious consolidation of his regime and the pitiful helplessness of the remnants of the Russian opposition. On the other hand, events in Independence Square of Kyiv, which took place on the same day, were very telling.

The readers probably know that the participants of the opposition rally that was held precisely there, in Independence Square, dismantled the metal structures that carried a Crimea-themed installation (it reminded the public of the events of 100 years ago, of such prominent figures as Noman Celebicihan and Petro Bolbochan, whose units waged a triumphal campaign in Crimea in April 1918, as well as of the annexation of Crimea that happened four years ago). Commenting on this ambiguous, multidimensional event is not easy, but we will try.

Firstly, it is striking that the participants of the protest event dismantled, in the heat of indignation that was largely understandable (because it was felt that the structures appeared not only to commemorate the tragic milestones of Crimean history, but also to prevent them holding the event!), the structures dealing with life and achievements of Bolbochan and prominent figures of the Crimean Tatar national liberation movement. The story is especially dramatic because it is unclear whether the people who have demolished these structures even know who Bolbochan and Celebicihan were, and what they did for Ukraine and Crimea. We are almost 100 percent sure that they do not know... So, we can conclude that here, too, as it often happens with us, emotions overtook mature reasoning. 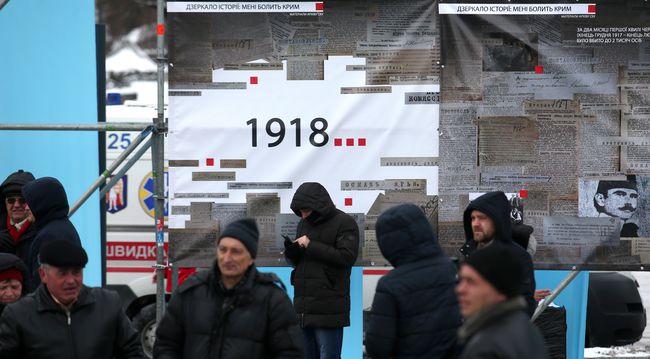 Secondly, it would be appropriate to say that the “official” inscriptions on the structures were, at the very least, not very fortunately chosen (such as “Crimea 1918. We Can Repeat It” or “Simferopol Is Ours!” “Yalta Is Ours!” etc. They were thoughtless copies of the Putinist slogans). However, did the protesting opposition members (or at least the reasonable portion of them, and such people are there!) really fail to see that by clearing the space for their event, the protesters at the same time demonstrated a rather low (at least) level of general and historical culture?

And thirdly, speaking frankly, this story has left a very sad impression that at a time when the Russian aggressor is firmly consolidating, we are quarrelling, and Putin, acting very agilely in his interests, is constantly relaunching the “matrix of the Ruin” in Ukraine. The Ukrainian authorities carry a major portion of the blame as well for making a lot of false steps that at the very least, do not contribute to the consolidation of a nation at war (and here some of the statements of the opposition are right on the target, so it must be honestly recognized). Not every piece of criticism plays into the hands of Putin, but... Succumbing to his provocations is worst of all.