The Battle of Kruty: legend and people The best way to honor the exploit and tragedy of heroes is to “humanize” them, refresh in memory the circumstances of a heroic self-sacrifice and the faces of the killed people, and reconstruct the course of dramatic events. The 100th anniversary of the Battle of Kruty, in which Ukrainian youths (about 400 heroes) clashed on January 29, 1918, with the invading Bolshevik hordes of Muravyov that were advancing towards Kyiv, gives us this very opportunity. Kruty, a small railway station in the Chernihiv region (18 km east of Nizhyn, 130 km north-east of Kyiv), has gone down in the history of Ukraine forever. To understand the significance of the Battle of Kruty, one should recall the events that preceded the tragedy.

The end of 1917… The young Ukrainian National Republic has just declared autonomy within Russia and taken a course towards the construction of a democratic state. The First World War is on. On December 17, 1917, the Central Rada receives an ultimatum signed by Lenin and Trotsky. The Bolshevik leaders demand that the Ukrainian authorities stop disarming Red military units and legalize them. This in fact means a declaration of war.

The UNR leadership defied the ultimatum and tried to smooth over the conflict with the Lenin government by way of diplomacy (certain parallels with today are discernible). But the tragedy was that there was almost no battleworthy army: while in the summer of 1917 the Central Rada could count on almost a 300,000-strong loyal force, in January 1918 the strength of the troops loyal to the UNR were only 15,000 throughout Ukraine. This was caused by a number of factors: the Central Rada’s intention to reduce or even disband the regular army and replace it with the “people’s militia,” a demoralized condition of Ukrainian troops, their fatigue of war, and subversive activities of Bolshevik propagandists aimed at demoralizing the national armed forces. These are only the main factors of the tragedy. But the crux of the matter was that the main burden of Kyiv’s defense from the Bolsheviks (it was clear that negotiations with them were useless) was to be shouldered by 17-to-20-year-old Ukrainian cadets, students, and Free Cossacks – all in all, a little more than 400 boys. Almost all of them fell in an unfair fight near Kruty on January 29, 1918, but they thus managed to stop the enemy’s advance to the capital of Ukraine. The invaders were mercilessly killing the wounded. 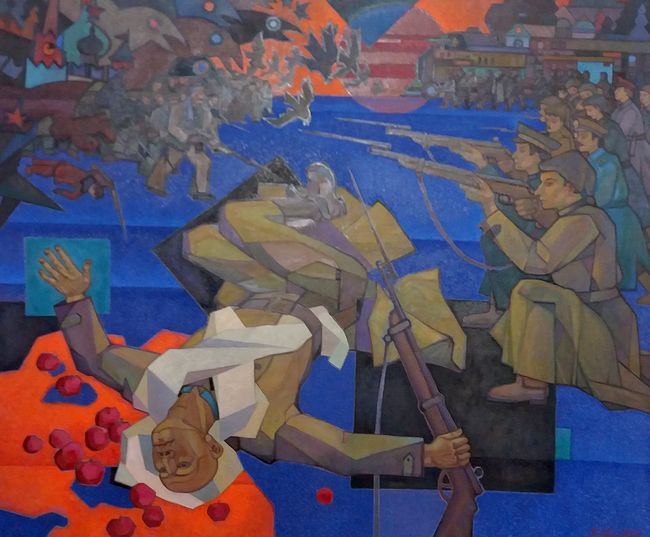 VASYL KORCHYNSKYI, “KRUTY. MUM’S APPLES.” THE WORK IS EXHIBITED AT THE 8th ALL-UKRAINIAN BIENNALE OF HISTORICAL ART “UKRAINE FROM TRYPILLIA TO THIS DAY IN THE WORKS OF CONTEMPORARY ARTISTS” / Photo replica by Maria PROKOPENKO, The Day

On January 5, an assembly of junior students of St. Volodymyr University and the Ukrainian People’s University resolved to form a student kurin (battalion) of Sich Riflemen and called on young people to defend Ukraine with arms in hand. Sergeant-major Andrii Omelchenko, a St. Volodymyr University student, became the commander of this unit that consisted of 200 fighters. The kurin was to be manned on a volunteer basis only. It also included some Kyiv school pupils. On January 26, 1918, Averkii Honcharenko, commander of a Ukrainian detachment of 400 senior cadets of the 1st Kyivan Bohdan Khmelnytsky Military School which protected the north-eastern approaches to Kyiv, urgently appealed to Kyiv for help: the Bolsheviks were on the offensive. On the next day, the first sotnia (company) of the Student Kurin arrived at area of Nizhyn. Ammunition was in short supply, and most of the boys had received no military training.

Unwilling to engage the overwhelming Bolshevik forces in Bakhmach, Honcharenko ordered to retreat to the station of Kruty and prepare for defense. The invaders launched an offensive in the morning of January 29. Honcharenko had only 400 fighters… An armored train and a gun supported them from the rear. In spite of the losses, the Reds were advancing, having an advantage in strength. The battle lasted for about five hours – the Ukrainians repulsed four enemy attacks but suffered heavy losses. Then the Reds brought up reinforcements on the Chernihiv rail track, including an armored train which began to shell the defenders from the rear. The students and cadets ran out of rifle ammunition and gun shells. Assistance from the UNR’s reserve prevented Muravyov from encircling and destroying the Ukrainians. After collecting the killed and wounded, the Ukrainian force retreated to the echelon. But one detachment of students (50-60 men) was captured by the enemy – they were all shot dead after humiliations and tortures.

Even despite a heavy death toll (250-300 youths were killed, the names of only those who were buried in March 1918 near Askold’s Grave are known for sure), the young fighters managed to delay the invaders’ march to Kyiv for two or three days (the enemy had to repair the railway and regroup its forces), which was very important under those circumstances (the Brest-Litovsk negotiations were underway). Let us remember: the exploit of the Kruty heroes cannot be futile!