“I consider myself an opera singer who lives in Vienna” Lena Belkina, a young and very talented Ukrainian opera singer who lives in Vienna but performs on the world’s most prestigious stages, has spent June under the sign of Ukraine. She became a star attraction at the Porto Franko Gogol Fest in Ivano-Frankivsk. What is more, she was not afraid of extreme conditions – the baroque concert was held at… a railway station, which was an experiment in the diva’s artistic career.

Then it was residents and guests of Kyiv who heard her divine voice (coloratura mezzo-soprano). Belkina took part in the soiree to mark a birthday anniversary of the legendary prima donna and mentor Yevhenia Miroshnychenko who had taught Lena at the National Music Academy of Ukraine.

But what became a real triumph of high classics was her fantastic performance of the leading part of Angelina in Gioachino Rossini’s La Cenerentola (Cinderella) at the National Opera of Ukraine. Belkina and her colleagues – Kyiv opera soloists Taras Shtonda, Olha Nahorna, Petro Ostapenko, Serhii Pashchuk, Olha Fomichova, and Serhii Kovnir – showed a harmonious ensemble, acting and vocal mastery, but Belkina was still the brightest star in this production. The audience listened to her with bated breath, with all eyes on what was going on the stage, and she finally received a thunderous ovation. The singer proved again that the part of Angelina is a gem in her repertoire and that foreign music critics are right to call Belkina the best present-day performer in the opera La Cenerentola.

“IT IS INTERESTING FOR ME TO TRY SOMETHING NEW AND UNCOMMON”

Lena, what are your impressions of Porto Franko Gogol Fest? That was the first time you sang at a railway station, so how did the unprepared audience respond to a baroque repertory?

“It was an artistic experiment and quite an uncommon art project. Fest organizers wanted to mix such different varieties of art as cinema, theater, literature, and music (classical, modern, and alternative), presenting them on some nonstandard platforms. When I received an invitation, I did not know that it was planned to hold the concert at a railway station. We first discussed my program, and it was not until I arrived in Ivano-Frankivsk that I learned that the baroque repertory would be heard at a railway station. Frankly speaking, I was surprised, but forum organizers assured me that the railway station management would do their best that no trains rumble by during the concert that was to begin at 10 p.m. You know, I strongly worried about the way an audience unprepared for serious music would react to baroque pieces. But I decided for myself that this soiree would be my experiment. The program was very good – it included works by Handel, Vivaldi, Bach, and Purcell. I sang accompanied by Ivano-Frankivsk’s chamber orchestra Harmonia Nobile. The audience (those who waited for trains, railway station employees, as well as a lot of people who specially came to hear classical works after reading the fest’s billboards) gave us a very hearty and warm welcome. In the very first minute, I felt attention and even forgot that the concert was going on at a railway station, not at a philharmonic society.

“Now, looking back, I am glad that there was a slot in my tour schedule and I could come to Ukraine again. I managed within one visit to perform at Porto Franko Gogol Fest, honor the memory of my mentor Yevhenia Miroshnychenko, and sing in my favorite opera La Cenerentola by Rossini.”

So, can I say that you are not afraid of experiments?

“It’s interesting for me to try something new and uncommon. Theater producers are fond of experimenting on European stages now. For example, Bregenz (Austria) has been hosting a famous annual festival, Opera on the Lake, since 1946. Productions are shown in the open and on floating stages. It is a place where you can hear the world’s best known operas in a new fashion. I was invited to visit this festival next year and sing the leading part in Georges Bizet’s opera Carmen. The producer said he would change the finale: Jose will not stab my heroine to death – he will just throw her into the lake. But I don’t have to worry, for there will be frogmen under the water, who will rescue me. Now I must learn to swim well – it’s good if there are rescuers, but it’s better to take care of myself and I’ll have an opportunity to overcome my fears.”

You learned vocal art from Yevhenia Miroshnychenko. Was she a strict teacher?

“Yevhenia Miroshnychenko was a striking personality. She could fascinate one with her beautiful voice and on-stage artistry. She was a prima donna. She could be different – both kindhearted and strict. She could bawl you out or laugh cheerfully. I think I was lucky to be part of her class at the National Music Academy of Ukraine. Those lessons laid the groundwork for me being a professional singer. Opera is a very complicated art, and one must work hard to achieve success. Miroshnychenko never indulged us, her pupils. She always stressed that God had given us voice, but it was too little – to reveal his or her talent, one should always go forward and work hard. She taught us not to be afraid of difficulties, and these lessons of life and art still help me very much.”

Angelina is your trademark part. When did the opera La Cenerentola appear in your repertoire? You sing this part in various opera houses, but which of the productions is dearest to you and left the deepest imprint on your mind?

“In 2011 I was invited to take part in the musical film Cenerentola directed by Carlo Verdone. This happened after the producer Andrea Andermann had seen me perform the part of Rosina in Duesseldorf and suggested that I sing the part of Angelina in the film. Cenerentola was shown live in various countries and then in the movie theaters of Italy. I think Lady Luck herself intervened. By that time, I had been singing small operatic parts for three years, and suddenly – Rossini’s La Cenerentola. I practiced very much in search of proper shades. After a successful premiere, various opera houses began to offer me some interesting projects, but I had to refuse because I was overloaded in the theater where I was a full-time soloist. 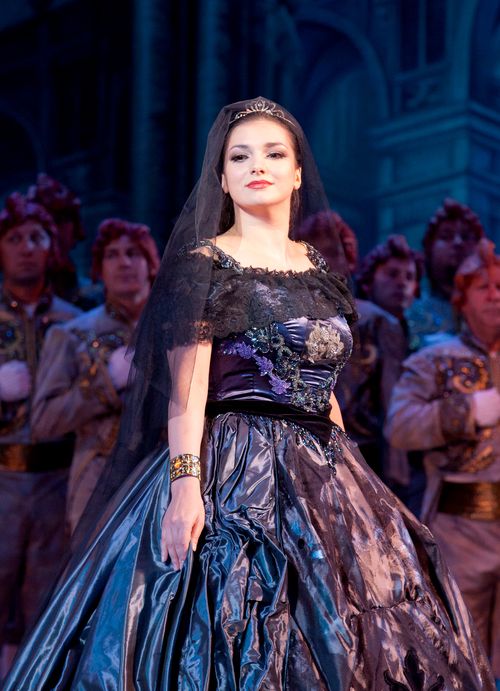 “I recently performed at the National Theater of Prague: it was a modern-day production of Cinderella, not the classical one, as in the film. I found it interesting to play in this original show. Moreover, the producer invented an extreme setting: there was a railway car on the stage – the house of Don Magnifico, Baron di Montefiascone, the father of Clorinda and Tisbe and the stepfather of Cinderella – which rotates, changing the scenery. On top of the car is a garden, where my heroine waters flowers. Then Alidoro, a philosopher and mentor of Don Ramiro, the Prince of Salerno, works a miracle – he presents Angelina with a beautiful ballroom dress (the actor stands in the garden, and wings suddenly come up behind his back, ropes come down from the gridiron and hook on to me – I begin to fly over the stage, with the corps de ballet dancing below. It was wonderful, like in a real fairytale). Alidoro sings his aria, and we are going together to the prince’s ball.”

“I DECIDED TO STRIKE OUT ON MY OWN”

Lena, are you now a full-time soloist at a certain opera house or are you a “freelancer” and can thus conclude production contracts on your own?

“I was a full-time soloist: first at the Leipzig Opera for three years and then at The Vienna State Opera for two years. Everything was OK, but I gradually understood that there were a lot of interesting invitations to sing in various theaters, while my contract with the Vienna Opera kept me from doing something else. For a full-time soloist must first of all serve his or her theater and is heavily involved in the repertory. In Europe, only the German-speaking countries use this system of theatrical contracts, while all the rest, including Italy, France, and Spain, have no full-time soloists – they only invite singers to various projects. So I decided to strike out on my own. And I am quite satisfied with it, for this broadens my horizons and allows me to take part in theatrical productions in various countries.”

It is the director, not the conductor, who plays “first fiddle” on European opera stages now. Whenever s/he invites a vocalist, s/he first of all looks at the way they act and only then at the way they sing. Which of the well-known directors and conductors have you already worked or would like to work with?

“I have already worked with some outstanding figures who contributed very much to my artistic development. Among them are such prominent stage directors as Peter Konwitschny (Germany) – he shows boundless fantasy, as well as irrefutable logic, in each of his works; Claus Guth – he has made a name for himself with his uncommon productions at the Salzburg Festival and at the La Scala opera house and is now considered one of the best modern-day opera directors; Andreas Homoki, with whom I worked in The Marriage of Figaro in Tokyo, and others. These directors know what they want and assign clear-cut tasks to soloists and the chorus. Abroad, the artiste must implement the director’s will. In Ukraine, on the contrary, it is the conductor, not the director, who dictates. There are just a few maestros in the world, who everybody reckons with. It is, for example, the legendary Italian conductor Riccardo Muti, who was La Scala’s artistic director before 2005. But the current trend is that directors dictate how to put on operatic productions.”

Every vocalist has a “ritual” of their own to psych up for a performance. What about you?

“You should, above all, relax and have a good sleep. I try not to eat much (I can’t sing at all at full stomach) and, what is more, you should think positive, without trying to settle any scores with your colleagues before the curtain rises. In general, positive emotions help give a good performance.”

Do you dream of singing any particular part?

“There are several of them. I have already signed a contract for singing the part of Carmen (in Bizet’s opera of the same name) next year. I am eager to sing the part of priestess Adalgisa in Bellini’s Norma. There is a superb Rossini-based repertory for mezzo-soprano, so I dream of singing a great deal of this.”

Rossini’s operas are considered a top notch for vocalists, for you should show the strength and beauty of your voice, be able to pronounce tongue-twisting recitatives, and display your acting mastery.

“I used to prepare the part of Angelina in La Cenerentola with an Italian instructor. We meticulously did the whole text, each word and note. Tongue-twisters are a very important component and link in this opera. You must sing them as if you were talking, without making a pause. I know Taras Shtonda, who plays the role of Don Magnifico, very well. He is a wonderful singer, a charismatic actor, and an excellent stage partner. He knows the text in depth, actively reveals his image, and finds some comic colors, which makes the production more beautiful. Earlier, I viewed him as a very serious singer who performs such monumental roles as Dosifei (Khovanshchina by Modest Mussorgsky), Ruslan (Ruslan and Liudmila by Mikhail Glinka), King Rene and Kochubei (Iolanta and Mazepa, respectively, by Peter Tchaikovsky), Boris Godunov and Pimen (Boris Godunov by Mussorgsky), but he is very comical and easily reincarnates in La Cenerentola. Incidentally, Shtonda suggested that we perform together in the next season’s philharmonic concert to the accompaniment of the superb pianist Anastasia Titovych. So, I am saying to Kyivites: see you soon!”

By Tetiana POLISHCHUK, The Day. Photo by Oleksandr PUTROV