Part I. Energy and waste The world is supposed to overcome hunger, poverty, violence, and waste in 12 years. New York City hosted a UN summit, September 25-27, 2015, convened as a high-level plenary meeting of the General Assembly, where 193 countries, including Ukraine, adopted the post-2015 development agenda and determined 17 ambitious Sustainable Development Goals (see Footnote), to come into effect on January 1, 2016.

If all goes according to plan, these 193 countries – and, ideally, the rest of the world – will turn into a man-centric paradise. At present, it is obvious that the Scandinavian countries, particularly Sweden, are closer to it than the rest.

Sweden, like Ukraine, is a participant in the United Nations Global Initiative on Sustainable Development. Within the framework of this project, Ukraine’s UNDP organized a five-day educational visit to Sweden for local administrative and central government officials, members of parliament and representatives of specialized associations from small towns, energy efficient cities, and united territorial communities. The Day’s reporter was among the visitors and also carefully studied the Swedish approach to sustainable development and its specifics. Special emphasis was placed on what Ukraine could borrow from this experience today, particularly in terms of energy independence and waste management.

Sweden doesn’t buy a single cubic meter of natural gas from its closest neighbor, Norway, with its rich energy resources. The oil crisis of 1973 taught a lesson several Swedish generations would remember: it’s best to rely on one’s own resources and stay out of debt and anyone else’s influence. Swedes are actively working on finding alternative solutions to domestic problems. 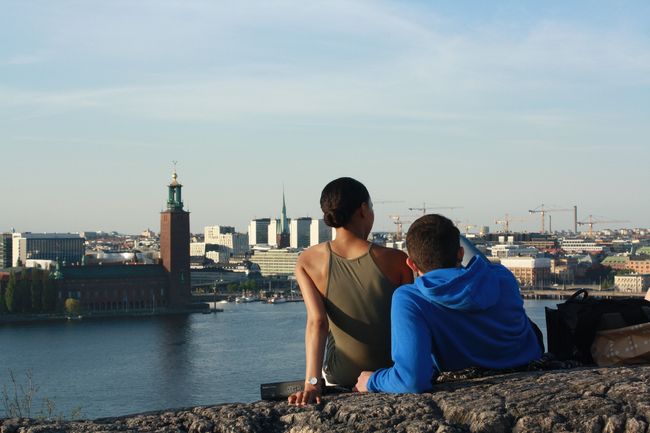 Sweden sustained a serious crisis after oil prices soared in the 1970s and currently receives almost all its electricity from nuclear and hydropower plants. Its public transport mostly uses organic fuel. There are 2,057 hydropower plants that supply 40 percent of the energy required. The rest is provided by nuclear power plants and imported coal.

Its ambitious goal is to become 100 percent free of fossil fuel by 2040.

There is a special committee made up of industrialists, academicians, farmers, car manufacturers, government officials, and experts. It is tasked with working out reforms in the world’s first oil-free economy, in a country with a population of 10 million.

Swedes want thus to secure themselves against possible cataclysms when climate change ruins other economies or lack of oil causes another price jump on the world market.

A Swedish government official said: “We want to get morally and technically prepared for a world without oil. Our plan is a response to global climate change, increasing oil prices, and warnings by experts that world oil resources will start getting depleted soon.”

Swedes are environmentally conscious, relying on global estimates. Henrik Selin, deputy director of the Swedish Institute, a government organization tasked with promoting Sweden internationally, explains that environmental aspirations and innovative ideas help his country’s economic growth: “The more greenery, the more well-being; this has been proven by practice.” He cites statistics: Sweden lowered greenhouse gas emissions by 22 percent in 1990-2013 while increasing GDP by 58 percent. Environmental dedication stimulates the development of new technologies and the output of goods for export with a high added value. This is what secures economic growth.

“We invented the zipper, heart rate meter, and Skype. We’ve always been fond of innovative ideas,” adds Mr. Selin. He is sure the reason is that Swedes are taught to be creative from childhood.

Lagom is a Swedish word you won’t find it in any other language. It serves to describe the entire Swedish nation. It means just right, just enough, moderately. Swedes build their daily life lagom, without antics and excesses, but in a convenient and comfortable manner. They never heap their plates with food, but will have several helpings if they feel like it. They will never buy another car if they don’t need it, even if they can easily afford an expensive fashionable model. Their home interiors are modest and practical. This is what lagom and the Swedish nation are all about. Swedes are economic, practical, and very environmentally minded. Come to think of it, lagom means an ideal balance in one’s life, when one can act naturally, without exerting any extra efforts.

Jealous care of the environment is one of the clauses of the Swedish code of ethics. They want their environment kept really clean, so it can be enjoyed by the current and subsequent generations. One could call them tree-huggers, but only in the good sense. Proof of this is their waste disposal program known as Pant. People are paid for submitting sorted out waste like plastic and glass bottles, whereas in many countries sorting out waste is regarded as an entertainment of sorts. This Scandinavian approach appears to be effective, considering that in 2012 almost 90 percent of aluminum cans and polyethylene bottles were recycled by waste disposal plants. Today, only one percent of solid household waste is transferred to landfill sites. In some Swedish towns this waste is converted into biofuel for cars.

Waste disposal techniques are interesting, with newspapers converted into paper, plastic containers into raw materials for other plastic products, food waste into biogas or soil (after a sophisticated chemical treatment). Buses and garbage trucks are usually propelled by converted electricity or biogas. Wastewater is purified so it becomes drinking water. Special trucks ride up and down city streets, collecting dumped household electronic devices and hazardous waste (chemicals and medical drugs). 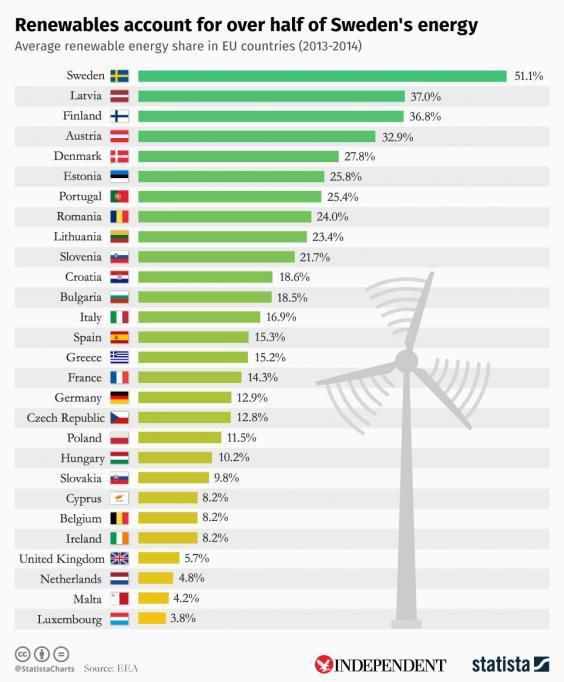 HOMES HEATED BY HUMAN WARMTH, GARBAGE, AND THE INTERNET

You won’t see a single home in Sweden with as little as a crack in the wall or plaster peeling off, let alone in a state of disrepair. Most houses are energy passive, heated by the incineration of waste.

Since over 40 percent of all electricity is consumed by heating and service industries, low energy houses are one way to decrease this consumption. They are also known as energy passive houses because they consume energy they already have, like the warmth of the human body, household electric appliances, fixtures, and sunlight. Such houses have been built across Sweden, including Stockholm, Goteborg, Vasteras, and Helsingborg. The first Nordic Ecolabel 36-apartment building appeared in Stockholm in the spring of 2011. It emits half the amount of carbon dioxide compared to a conventional structure.

There are homes heated by the Internet in Stockholm. The enterprising Swedes realized that the World Wide Web is more than cyberspace, that it is a multitude of hardware, that the images they see on their PC screens are provided by a great many servers, most of which are located at huge warehouses or data centers. The heat emanated by these servers keep homes warm in Stockholm.

Servers are kept in cool, dry tiled rooms free of dust. These tiles can be removed to reveal a multitude of cables. These rooms contain thousands of computers working round the clock seven days a week, carrying out various tasks. Air conditioners and ventilation systems maintain the required temperature. More often than not, the excessive heat is removed from the premises and wasted. However, heat is energy and Swedes decided to use it in central heating.

In Stockholm, this project is known as Stockholm Data Parks and is implemented in collaboration with the municipal authorities, Forum Varme, and other companies. It was recently joined by Ericsson and H&M data processing centers.

This is how it works in most cases in Stockholm. Cold water is pumped to a data processing center where it is used to keep the temperature low. The water gets hot by keeping the air cool and is then used to keep Forum premises warm. By the end of 2018, Stockholm data centers are expected to get enough heat to keep 2,500 apartments warm. By 2035, they expect to secure 10 percent of heating supply by using this technology.

The Swedish experience is unique. However, a number of solutions to problems are being implemented in Ukraine. For instance, solid household waste and biomass are being used in central heating, adequate forest management practiced, innovative businesses supported, and even electric highways built like those in Sandviken.

P.S.: The Editors would like to express their gratitude to Ukraine’s UNDP for offering an opportunity to share the Swedish SDG experience with the readers. 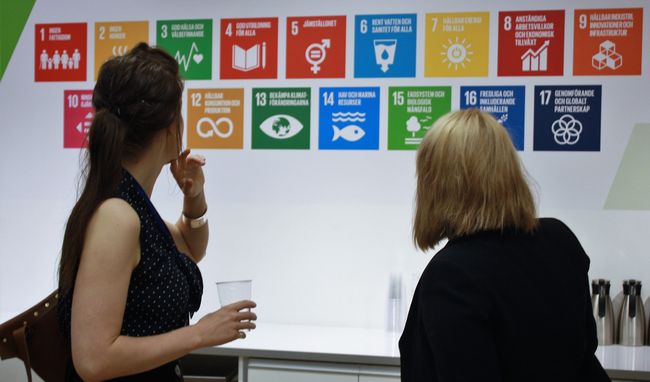 Goal 1. End poverty in all its forms everywhere.

Goal 3. Ensure healthy lives and promote well-being for all at all ages.

Goal 5. Achieve gender equality and empower all women and girls.

Goal 6. Ensure availability and sustainable management of water and sanitation for all.

Goal 7. Ensure access to affordable, reliable, sustainable, and modern energy for all.

Goal 10. Reduce inequality within and among countries.

Goal 14. Conserve and sustainably use the oceans, seas, and marine resources for sustainable development.

Goal 16. Promote peaceful and inclusive societies for sustainable development, provide access to justice for all and build effective, accountable, and inclusive institutions at all levels.

Goal 17. Strengthen the means of implementation and revitalize the Global Partnership for Sustainable Development.

By Alla DUBROVYK-ROKHOVA, The Day. Photo by the author