or Seven lessons from Bohdan Hawrylyshyn

This noted economist, public figure, and patron of the arts would have marked his 91st birthday on October 19. Below are comments by people who have known him and worked with him.

I remember watching recently a short documentary film about Bohdan Hawrylyshyn on the Culture TV channel. The camera followed him to his native village of Koropets, Ternopil oblast. You could not help noticing that Mr. Hawrylyshyn was recalling his parents and his life here, in his homeland, with respect and, at the same time, with warmness and piety, but without affected pomposity. He used expressive details and traits in describing the Ternopil region of the early 20th century. One of them was etched on my memory: there were only two books – the Bible and Taras Shevchenko’s Kobzar – in the parental house.

1 Accordingly, the two great books set the bar very high. It is the first lesson, so important to present-day young people.

A great book can give much more to a spiritually-centered reader than unsystematized and chaotic absorption of terabytes of a globalized information space. But the perception and learning of such texts would have been impossible unless a beneficial ethical ground, intellectual sensitivity and values had been embedded in Mr. Hawrylyshyn’s world at an early age. It follows from the memoirs that his father went places and saw the way people lived there.

2 The second key lesson: the right proportions of the world.

I am sure that the broad horizon of the would-be member of the Club of Rome was formed at that very time.

It is important for a living soul, which aspires to grow, to know that there is a great dream in the world. One must make a step towards it every day. I think Bohdan Hawrylyshyn worked up very early a colossal, albeit selective, intellectual appetite which has been letting him place valuable knowledge on the already shaped system of values throughout his lifetime.

Then he met some true giants on his life path. I will only name two: Metropolitan Andrei Sheptytsky, whose blessing Mr. Hawrylyshyn still recalls with gratitude, and Otto von Habsburg.

3 And it is the third lesson: the role of personality in the life of another personality.

It is important to me, Den’s staff, and our readers that no other than Mr. Hawrylyshyn wrote for our newspaper his reminiscences about an incredible individual, a true unrealized king who departed this life in July this year (see “Recalling Otto von Habsburg” in Den No. 119, July 12, 2011). The great Ukrainian wrote about a great Austrian and a good friend of our nation. It is so important that Ukrainians, who still have a lot of imposed complexes, should be able to appreciate the luxury of thinking in unison with extraordinary personalities.

The outstanding scholar wrote his famous book Towards More Effective Societies: Road Maps to the Future in 1979 in English. The book was later translated into German, French, Spanish, Japanese, Korean, and Polish. Ukraine was in a tightly closed “can” of the Soviet Union at the time, isolated from extremely valuable knowledge. The author says he had to wait until 1990, a time of radical changes, for his book to be published in the native language.

I first met Mr. Hawrylyshyn in the field of education, too. When the first Ukraine Incognita Library book came out, I planned the first tour of this country’s universities. After the first meeting, Nizhyn Pedagogical University’s governing body requested me to continue intellectual contacts with students. I began to ponder over who could be the most suitable figure to meet with, who can understand the world at large and, at the same time, has a “concentrated charge” of Ukrainianness. I immediately thought of Bohdan Hawrylyshyn and phoned him. Although we barely knew each other at the time (it was in 2002), he easily agreed to a joint trip to Nizhyn. For some, this town may be just a raion center in Chernihiv oblast, but, for Mr. Hawrylyshyn, the University of Nizhyn is Gogol’s alma mater. This in fact determined the format of his contact with students, which revealed to me personally the uncommon human generosity and the colossal potential of a pedagogue in the broad sense of the word.

5 The fifth lesson: a powerful personality is, as a rule, simple and free of vanity.

Mr. Hawrylyshyn calls me from time to time to say the words of support. He favored very much the idea of establishing the Ostroh Club of Free Intellectual Communication of Young People and promised to find time to personally meet its members. It is he who supported the publication of Extract +200, the 11th book of our newspaper’s library. And when Mr. Hawrylyshyn came to know about Den’s Summer School of Journalism this year, he immediately said he wished to meet its students. This personal contact was perhaps as important an event for students as meetings with his great mentors were for Mr. Hawrylyshyn.

6 The sixth lesson was spelled out by Bohdan Hawrylyshyn himself: “Giving something brings much more satisfaction than consuming something.”

A lot of our compatriots of various waves of emigration, who have integrated into the Western world, have reached high living standards, but not so many have become world-famous public intellectuals who do not forget that they are Ukrainians. We can recall with gratitude Ivan Lysiak-Rudnytsky, Yevhen Malaniuk, Ulas Samchuk, Roman Szporluk, et al.

Bohdan Hawrylyshyn left Ukraine in 1943. Over this span of time, he has worked his way up from a displaced persons camp to being acclaimed in international circles, teaching in 70 countries, and consulting major companies. He usually lives abroad but always remains Ukrainian. He knows a lot of languages, but his Ukrainian is natural and melodious.

7 The seventh lesson is decisive and sounds almost like a national idea: identity and modernization.

When you, Ukrainian, go abroad, you do not need to become a German, a Russian, or an American.

Bohdan Hawrylyshyn’s example for young people can be formulated as follows: do not be afraid to think independently and dream boldly.

This article Den/The Day’s editor-in-chief Larysa Ivshyna wrote for Mr. Hawrylyshyn’s landmark memoirs I Remain Ukrainian that came out in Kyiv in 2011 (it was later published in English as A Ukrainian Forever)

In memory of the true Ukrainian Bohdan Hawrylyshyn 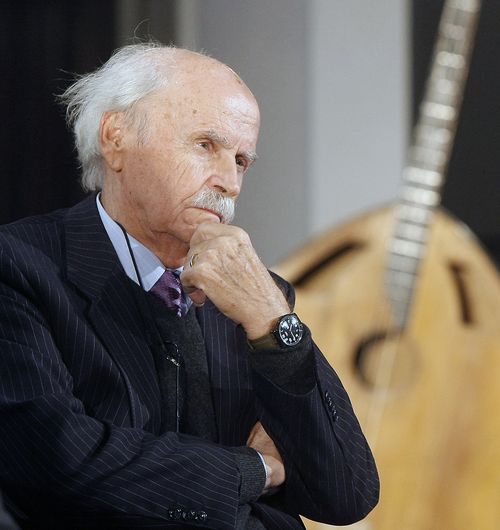 “I always regarded Mr. Hawrylyshyn as an outstanding personality. Working with him was easy and he made one believe that any project was possible. He was unique; he seemed capable of accomplishing practically anything. He loved and believed in fellow humans. He was a patriot and he had a keen sense of humor. He believed that all would be well in the end. He was unbelievably active in each endeavor – and this inspired all who worked with him to do even better, handling projects that seemed impossible at first sight. He wrote the Declaration of Human Responsibilities that reflected his lifestyle and worldview. Responsibility, according to him, was an ability to think on a global scale while acting on a daily basis.”

“Mr. Hawrylyshyn was a scholar, public figure, and patron of the arts. He was a man of the world. After each conference or workshop seminar, when the music started, he would be among the first on the dance floor. He was a ladies’ man in the best sense of the word – always courteous, always gallant. Communicating with him was interesting. He wasn’t a gourmet, but he loved good food and appreciated each tasty dish. He was fond of sports and opera. He loved his wife and said that she had always understood and supported him. Taking risks was easy for him, for there was always someone beside him who’d say: ‘Go ahead! You can do it!’”

“Bohdan Hawrylyshyn was a friend. We first met at one of the Plast [National Scout Organization of Ukraine] meetings and he taught me to understand the difference between the dreams of a person who can just see dreams and do nothing about them, and those of a creative personality whose dreams can come true – even if for that person alone. He taught the presidents and chief executives of large companies in Ukraine to make big plans and do their utmost to carry them out, while making even bigger plans. He was a management guru and his experience remains invaluable.”

“I first met Mr. Hawrlyshyn as a student of the Ostroh Academy. He visited us several times and each time was a very interesting experience. The NGO G20 Summit, in particular, was most interesting. He came, took off his raincoat, put it on the hanger, shook my hand, and simply said: ‘I’m Bohdan.’ After the meeting, I was fortunate enough to receive a copy of his autobiographic book. His life and what he had to go through inspired me. Especially his managerial principles:

“My friend Bohdan Hawrlyshyn has done much for Ukraine. Personally, I appreciate his ‘Youth Will Change Ukraine’ Program that currently involves over 400 people who are busy working out reforms.”

“Dreams can be like antidepressants, drugs, and they can also pave the road to success. That was how I came to understand Mr. Hawrylyshyn’s ideas after filtering them through my mind. He was an eternal optimist. His belief in our younger generation and their ability to build [a new progressive] Ukraine seemed so impractical and naive! I remember the first time I met with Mr. Hawrylyshyn. I was fresh from the Ostroh Academy’s Economics Faculty, with a cum laude degree. I was then enrolled in Den’s Summer School of Journalism (SSJ). At the time, I thought I knew everything about economic models, plans for overcoming poverty and increasing GDP. Mr. Hawrylyshyn was visiting SSJ and we, young skeptics, harangued him on various crises, corruption, bad politicians, and plans for combating all this. He listened to us, smiling, and said it was further proof that we would be able to change Ukraine for the better. After the meeting, we agreed that the man was good, clever, but most likely too removed from real life. Later, I’d often feel like kicking myself for this. Worst of all, we failed to get Mr. Hawrylyshyn’s message at the time; we weren’t on the same wavelength.

“I believe now that his ‘dreams’ were his way to protect himself from harsh reality; that this once served to prevent a young lumberjack from getting ‘frozen’ like another poor illiterate immigrant. His ‘dreams’ must have shown him the way to the world of knowledge, culture, and big business. For some people, dreams are as effective as a good business plan is to a healthy company.

“Mr. Hawrylyshyn wasn’t an infantile dreamer. He was a pragmatic scholar, successful businessman, and an active patriot. He took his first opportunity to return to Ukraine, then still under the Soviets, and founded the International Management Institute (MIM-Kyiv), bringing with him his best asset: knowledge and experience. Ukraine could have taken a different, civilized course after proclaiming national independence, with its wealthy building their fortunes by abiding by law, instead of becoming today’s oligarchs, but this would take wisdom, something Bohdan Hawrylyshyn tried to share with us.”