Against violence and in favor of dialog

Against violence and in favor of dialog The past weekend, the Catalonia independence referendum was the most discussed topic in the world. Spanish authorities were desperately trying to prevent the plebiscite from going forward: according to the regional government, at least 840 people were injured in scuffles with the police. However, the clashes that took place throughout the region did not prevent its authorities from counting votes: on the evening of October 1, the regional government announced that 2.26 million out of 5.3 million eligible voters came to the polls, of which 90 percent said “yes” to the independence of Catalonia.

The world’s leading media actively reacted to the Catalan referendum.

As Le Figaro wrote, the front pages of the Spanish and Catalan newspapers featured the words “repression,” “shame,” and “rebellion.”

The Catalan publication La Vanguardia wrote about the clashes in the region in an editorial and noted: “It all could have been worse.” “We are entering the phase of strikes and street protests... with more dynamics and more repression,” the newspaper added.

According to the Spanish El Pais, during the referendum, “even the bare minimum of voting rules” was not observed, because many rules of the game had been changed just 45 minutes before it started. According to the media, non-transparent ballot boxes were used during the referendum, there were no official ballots or envelopes, vote counting system, electoral council, etc. At the same time, the editorial article noted that “Mariano Rajoy has been completely unable to solve the crisis from the very beginning.” 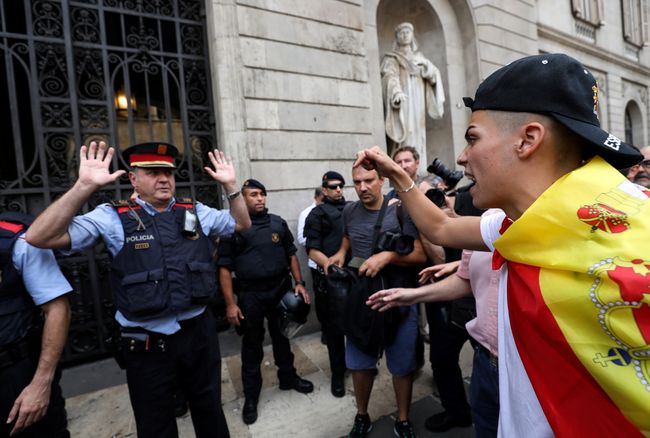 SEPTEMBER 30, 2017. A DEMONSTRATOR SHOUTS AT A MOSSO D’ESQUADRA, CATALAN REGIONAL POLICEMAN, IN FRONT OF CITY HALL DURING A DEMONSTRATION IN FAVOR OF A UNIFIED SPAIN A DAY BEFORE THE BANNED OCTOBER 1 INDEPENDENCE REFERENDUM, IN BARCELONA, SPAIN / REUTERS photo

DW drew attention to the fact that many European leaders were “noticeably quiet” about the Catalan referendum, and by the morning of October 2, there was no reaction from the EU leadership in Brussels.

British Foreign Secretary Boris Johnson tweeted that Spain was a close ally and a good friend whose strength and unity mattered to the UK. Johnson called for respect for the Spanish constitution and for the rule of law.

First Minister of Scotland Nicola Sturgeon tweeted: “Regardless of views on independence, we should all condemn the scenes being witnessed.” Let us recall that in 2014, Scotland also held a referendum on independence from the UK, with a majority voting against secession.

Member of the European Parliament Guy Verhofstadt called for de-escalation and a political solution to be agreed upon by all political parties, including opposition ones. 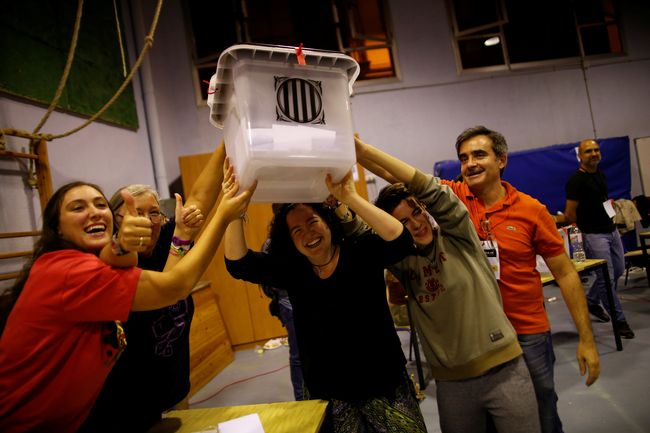 Minister of Foreign Affairs of Serbia Ivica Dacic expressed support for the Spanish government and stressed that his country’s position was “clear and principled,” because Spain took the same position with regard to the territorial integrity of Serbia. DW recalls that Spain, unlike other EU member states, does not recognize the independence of Kosovo.

As The New York Times wrote, “Catalans are voting not only without backing from Madrid, but also without any sign of support from the EU or other major players in the international community.”

The Washington Post published an article titled Spain’s Rajoy Sets the Stage for a Bigger Battle over Catalonia. The media noted that “the brutality on show turned into a public relations disaster for Madrid” and might deepen political polarization in the country.

“After violence by Spanish police, a declaration of independence by Catalonia’s regional government seems more likely than ever before,” a BBC commentary said. Still, the media noted that given the chaotic nature of the vote, voting figures should be taken with a pinch of salt.