“Your newspaper is capable of changing Ukrainians’ consciousness”

How residents of the village of Litky in Kyiv oblast interpret, preserve, and create their history, while books from Den’s Library help them along The village of Litky is one of the many in Kyiv oblast. At first glance it seems to be just the same as the others. However, upon arrival you understand that history dwells there. For example, famous writer, dramatist, and folklorist Mykhailo Stelmakh used to work as a teacher there once. Locals do not only know and preserve the history of their village, but try to record significant current events for the future generations. Den helps them in this continuous process of learning and interpretation of their own history. But first things first.

Retiree Leonid Kroshko from Litky is our regular reader. He has been presenting an annual subscription for Den and books from Den’s Library to the Mykhailo Stelmakh School in Litky for several years in a row. Thanks to him, the school library received The Power of the Soft Sign, Wars and Peace as well as book series “Armor-Piercing Political Writing” and “Subversive Literature.” Kroshko says that he has not missed a single issue of our newspaper since the first time he read it. And when he started reading books from Den’s Library, he discovered a lot of new information and realized that this knowledge must be shared. And he was right. These books instantly found their admirers in school classrooms. 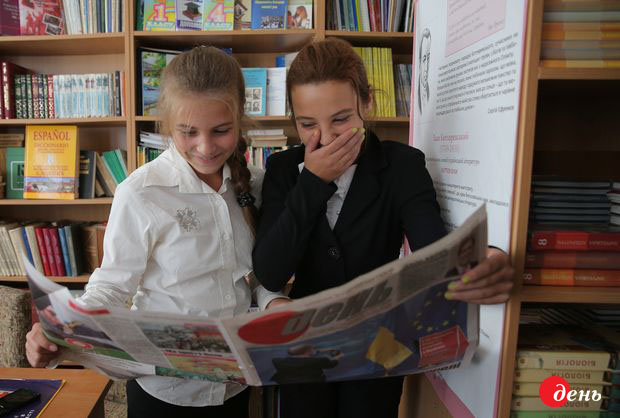 The biggest supporter of the newspaper and the books at the Litky school is history teacher Yaroslav Satskiv. Not only does he read Den’s publications, but he also actively uses them with students during the lessons, makes newsstands with Den’s articles on history. He is convinced that the newspaper is not only for adult readers, children can find a lot of interesting there too. “The newspaper caters for readers of various ages. Last year was declared by Den the Year of Volodymyr Monomakh – he is in school curriculum for seventh grade students. I like articles that contain information from curricula for 10th and 11th grades the most. Den published an extremely relevant article dedicated to the 75th anniversary of the beginning of the World War II. Before that, we worked with two comprehensive articles about the beginning of World War I during the lessons. Some textbooks are too academic and dull for children. If Den’s contributors wrote school textbooks, children would read them with curiosity,” Satskiv is convinced. Besides, he constantly uses The Power of the Soft Sign in his work, according to him, the book presents important historic themes from interesting perspectives.

This interest of the village inhabitants in Den’s historically themed articles and publications is not surprising. History occupies an important place in the community’s life. For example, patriotic education is an important compound of the school curriculum in Litky. The first lesson in the local school begins with the anthem, and on Fridays everyone, from first graders to caretakers, wears a vyshyvanka [a traditional embroidered shirt. – Ed.]. Every graduating class embroiders a rushnyk [a towel. – Ed.] for the school, and they are preserved as dear souvenirs. There is also a museum of regional ethnography at the school. The village has something to be proud of: the first written mention of the local embroidery appeared in the 16th century, and in 1725, chumaks [salt merchants. – Ed.] from Litky were known. The local shoemaker guild was famous too, according to Satskiv, when Nicholas II was going to Kyiv by ship in 1911, he stopped in Litky, and local craftsmen made shoes for prince Aleksei without fitting. The emperor’s son had hemophilia, problems with shoes could have bad effects on his health. Litky shoes were so comfortable that Nicholas II presented the head of the shoemaker guild with a watch, and in two years local craftsmen received a government commission for manufacture of shoes. Satskiv demonstrates an old handmade baby shoe. It was not stitched, but fastened with tiny nails made of birch – an extremely fine craftsmanship. 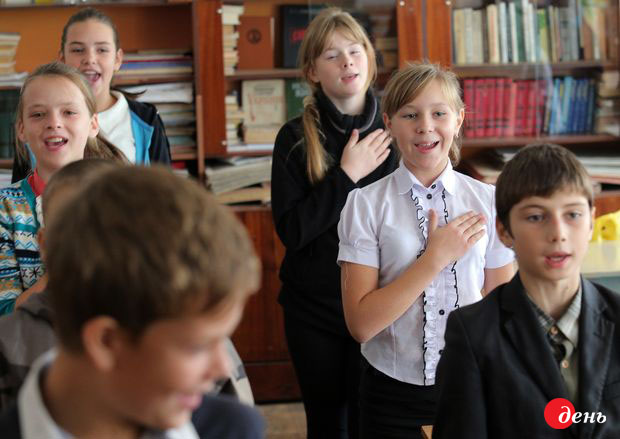 PATRIOTIC EDUCATION IS AN IMPORTANT COMPOUND OF THE SCHOOL CURRICULUM IN LITKY. THE FIRST LESSON IN THE LOCAL SCHOOL BEGINS WITH THE ANTHEM

In 1935-39 Mykhailo Stelmakh worked as a teacher in Litky. He was visited by Maksym Rylsky there. “Stelmakh gathered a collection of folk songs in Litky, over a thousand of melodies. The writer went with children to the adjacent villages and collected materials. When Stelmakh saw that locals had a lot of rushnyks, he started collecting ancient embroidery patterns. The writer and his students wrote down a song and drew a certain pattern next to it. Now four albums with such works are preserved at the Institute of Art, Folklore, and Ethnology of the National Academy of Sciences of Ukraine in Kyiv,” says Satskiv. After the war Stelmakh visited Litky as a private person. The village also received a gift of the writer’s autograph, a foreword to a poem dedicated to Gagarin’s flight into space. 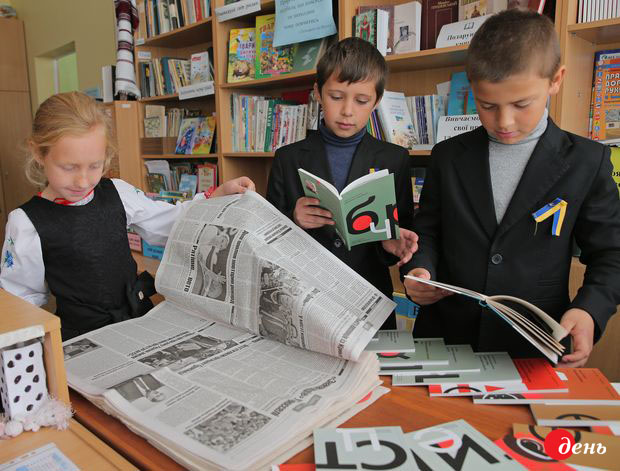 The villagers are not only interested in their history, but they also create it. The school faculty participated in the Orange Revolution and Euromaidan; they keep helmets pierced with rubber bullets as a memory. Besides, the exposition of the school museum includes a barrel of a grenade launcher, which was presented by a school graduate who is fighting in Donbas. The teachers discuss events in the east with the children, and read articles about soldiers fighting in the Anti-Terrorist Operation zone.

Principal of the Litky school Hanna Samoilenko-Hrazhdan thinks that “Den is capable of changing the consciousness of the east and Ukraine in general. The periodical is doing a great thing: it lifts national spirit and patriotism. Den opens eyes, gives hope for the future, trains, and inspires for the daily task of upbringing.” Now the teachers are planning to visit Den’s 16th Photo Exhibit in Kyiv, because photos in the newspaper are always up to the point.

By Maria PROKOPENKO, photos by Artem SLIPACHUK, The Day