“I am particularly interested in history at the moment” Den’s books in every home! Is it not a suitable motto for an effort to build an intelligent society? This newspaper is committed to making sure that our publications do not miss their readers, and we achieve it by looking for publishing partners and asking socially responsible businesses to help us spread our books to schools, universities, and local libraries. Unfortunately, the nationwide distribution system is neither a helpful force nor a promoter of qualitative changes in this field. Against this background, it was especially encouraging to learn of the “cultural record” recently set in Dnipropetrovsk, where the 161st School has received, with the support of the mayor, complete sets of books published in Den’s Library series. However, we need more people willing to support top-quality culture! Den appreciates all its readers, but there are special cases when we feel like we have to help “our people.” Two such stories are below.

“I am particularly interested in history at the moment”

Kharkiv schoolgirl Alina Myshcherykova, who was the subject of photo Feeling which took part in Den’s Photo Exhibition-2015, received a gift from our publication 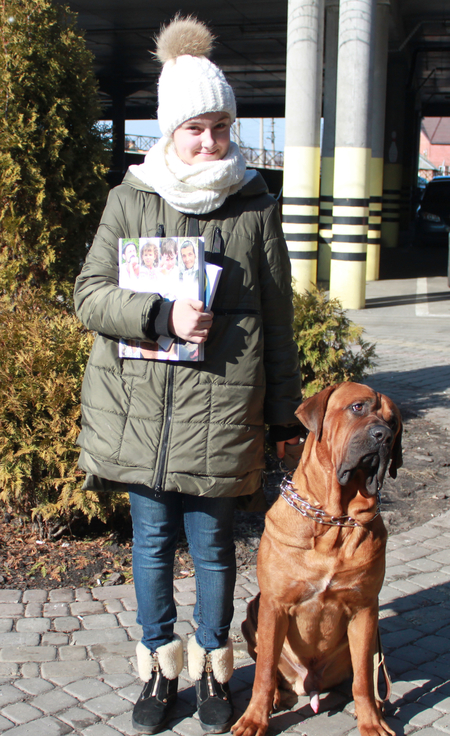 ALINA MYSHCHERYKOVA, KICHIRO, AND DEN’S BOOKS / Photo by the author

13-year-old Alina Myshcherykova experienced a joyful surprise, upset and joy again in connection with Den’s Photo Exhibit, which was recently held in Kharkiv. First she learned by chance that a photo featuring her was displayed at the exhibition – she was alerted by a classmate who, after coming with her artist mother to the Yermilov Centre which hosted the exhibition, recognized Myshcherykova in the photo. The classmate then showed her photo of the picture at the school, and Myshcherykova confirmed that Oleh Batrak’s Feeling did, in fact, depict her and her dog Kichiro. “Most probably, the photo was taken at a dog show in Kyiv in August 2015, although I had no idea that I had been photographed, much less that the photo would make it to the exhibition! In addition, this picture is so splendid, and its name is too! I was very happy to have this surprise. All my classmates asked me about it for days,” the schoolgirl told us.

Together with her mother and dog, the girl visited the Yermilov Centre on the exhibition’s closing day, February 12. However, this delightful experience was cut short by an upsetting incident – while the family was speaking to Den’s reporter, someone broke their car’s window and stole a backpack with Myshcherykova’s tablet computer and books. The girl reacted calmly to this development, saying that the material losses were not the worst thing in the world, but she missed the books greatly. Upon learning of the incident, Den’s editor-in-chief Larysa Ivshyna decided to console the courageous girl from the photo by presenting her with a copy of book Ukraine Incognita. TOP 25 with signature and warm wishes, a photo album and Den’s Picture set of postcards. Thus, the pleasant surprise offset the thieves’ crime.

“Please convey my thanks to Ms. Ivshyna and the newspaper,” the girl said. “I am very interested in the origin of the Ukrainian people, so Ukraine Incognita. TOP 25 is a very important book for me. I am particularly interested in history at the moment, because I have noticed that people often regurgitate false information regarding historical facts, distort the past, and it influences current events, ongoing developments in this country and in Russia. I think this book will help me at school as well.” Myshcherykova has promised to share with us her thoughts after reading the book. The girl took interest in Den’s Picture set of postcards and the photo album as well, for she is an earnest student of design. “We believe that this gift will bring good changes in our family, and therefore in life. Den works to create a new future and it is very impressive,” Myshcherykova’s mother Olena remarked, who is confident that good and generous actions shape people’s destinies.

Yevhenia Papko, who has to walk five kilometers to the nearest library, now has her own copy of Ukraine Incognita 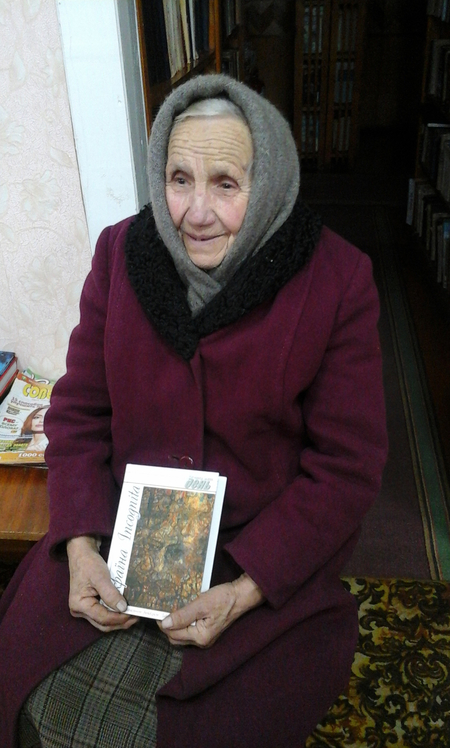 WITH A GIFT FROM DEN / Photo courtesy of the author

Valerianivka, “our woman” on learning that this 82-year-old (!) villager has to walk five kilometers to the raion center’s library and loves reading historical literature. For such loyalty to books and history, Papko received a gift from Den: a copy of book Ukraine Incognita, which was the first volume in Den’s Library series, but is still relevant, having gone through several editions.

The crucial question for us was when we would be able to find Papko in the library. Of course, her home village of Valerianivka can be reached by minibus, but it runs just once a week. Also, it was exactly a meeting in the library that was likely to be more interesting, since the woman has been its active patron for the past three years. Senior librarian of the institution’s patron services department Halyna Antoniuk (who married a man from Valerianivka, by the way) showed Papko’s library card. The old woman read nearly 50 books just in the past year! Well, who can boast of such numbers these days?! Her preferred lecture includes historical fiction by authors such as Volodymyr Lys and Roman Ivanychuk and detective fiction, while romance novels find no favor with her, since Papko denies the very existence of romantic love.

The Rozhyshche Raion Library’s director Svitlana Osypchuk told us that a lot of her patrons were of venerable age. Over-70s are especially well-represented. Perhaps, they now compensate for books they failed to read in their youth. Papko’s home village of Valerianivka is also home to another avid reader, 76-year-old Maria Antoniuk, who is stuck at her hut because of health issues, so she gets books from the library through relatives. In Rozhyshche itself, 84-year-old Stepan Dudik is another very active reader. However, Grandma Zhenia (as Papko is known in the library) is a truly special case. She kept visiting the library even during a spell of very frosty and snowy weather, which hit the region this winter and stopped bus services to her village for a time. Moved by such loyalty to the book, librarians offered Papko tea and told her story on the institution’s website. In this way, the simple woman from a small village with less than 150 residents has become a kind of media celebrity. She has had articles written and TV reports filmed about her, and one TV channel even wants to make her story into a TV show, but Grandma Zhenia has not given her consent yet. Popularity helped to solve her everyday problems to some extent. When we met her in the library, librarians handed a parcel to her, which was sent from Lviv and contained a lamp. Up to that point, Grandma Zhenia read books by the light of a light bulb, which she covered with a newspaper... Good people sent her a lot of books as well.

Den’s gift, book Ukraine Incognita, get Papko interested because it “deals with history.” Grandma Zhenia’s own life and fate are also part of the history of Ukraine. She was born in the village of Husenne, Kholm Land, which stands on the Bug River’s banks. She was evicted from her ancestral land during the infamous Operation Vistula. The family was initially sent to the Odesa region, and then moved to Volyn to be closer to home... Papko was then 10 years old, so her story is very detailed and moving to tears. She recalls that Kholm (now Chelm, Poland) was the location of a camp for Soviet prisoners of war. Sometimes they escaped from the camp, and Papko’s family helped them to cross the Bug River (which was very shallow there) to Volyn, then one of the regions of the Soviet Union. She remembers how and who she smuggled to the other side, and how one of the Germans quartered in their house almost shot her father, who had also shown a man the path to the Bug River...

With the new lamp and the new book presented by Den, Papko went back to her little village. She refused the librarians’ offer to have someone bring these gifts to her home by car in the coming days. The old woman is surprisingly friendly, positive and sincere, despite having gone through every kind of trouble in her life. When her husband died, her youngest son (she bore four children in total) was only two years old. She worked hard on the collective farm, and has long been retired, receiving, of course, a tiny pension. She never could afford to buy books, but now reads and seemingly cannot have enough of it.

By Natalia MALIMON, The Day, Lutsk