How to form a caring society

Den’s Days in Odesa were the days of mutual discovery “WE HAVE TO DO A GREAT DEAL OF POLITICAL WORK”

During a meeting with Odesaites, Den/The Day’s editor-in-chief Larysa Ivshyna and politics reporter Valentyn Torba presented the journalistic triptych issued in the “Contemporary History for Dummies” series (including A Case without a Statute of Limitations; I, an Eyewitness. Notes from the Occupied Luhansk; Catastrophe and Triumph. The Stories of Ukrainian Heroes).

According to Ivshyna, the “Contemporary History for Dummies” series was a real challenge for the editorial team, because young people often do not see the cause and effect relationship between the events of the 1990s and the Euromaidan. Meanwhile, the journalistic trilogy provides a convincing answer to important questions of contemporary history. “In the preface to the Euromaidan-themed photo album, I wrote that I opposed people’s power revolutions. I believe that normal politicians should transfer power and govern in a regular manner, so that the people would not need to oust them every 10 years. Each of us needs to know not only who they want to remove from power, but also who they want to bring to power. We have to do a great deal of political work for it. And whoever organizes people should feel this responsibility. In other words, we had the ‘scene of the Euromaidan’ and the ‘people of the Euromaidan.’ Does the ‘scene’ feel its responsibility? It is a good and logical question for a journalist that needs to be discussed,” Ivshyna believes. “I often get questions like ‘when will we finally get a high-quality legislature?’ I think it will happen after a constitutional majority of people gets educated by Den.”

Presenting to Odesaites this newspaper’s Tree of Projects, Ivshyna noted that the Ukrainian media lacked quality information for intelligent audience. “On a previous visit to Odesa, I had a lad from the university asking me, how it could be so that our country had no philosophers? In fact, this reflected the failure of information policy and all the TV channels which limited themselves to studying political dwarves. Their journalists ignored philosophers as well as mathematicians, astronomers as well as physicists. How could it fail to distort the Ukrainians’ view of themselves, then? It drives the Ukrainians into a ‘ghetto’ and cuts supply of intellect. Intellectual public experiences veritable apartheid at the hands of the Ukrainian TV,” Ivshyna told her audience.

“OUR TASK IS TO REALIZE OUR HISTORY AND GET IT BACK”

Odesaites also talked to Valentyn Torba, Den’s political observer and the author of I, an Eyewitness. Notes from the Occupied Luhansk who was forced to leave Luhansk for Kyiv. “Our recent history is linked to specific losses, specific pain, and specific individuals. Its characters have lost a lot. Unlearned lessons of history rolled them up like a steamroller or a tank. Some lost their properties, others their family members, and some again were forced to start their lives anew,” Torba said. “It seems strange to link everything to people like Leonid Kuchma, does not it? What does Kuchma have to do with basement prisons in contemporary Stakhanov or Luhansk, for example? Oleksandr Yefremov was appointed Luhansk governor in 1998, soon after Viktor Yanukovych came to lead Donetsk region. They were appointed by Kuchma, who is now supposedly representing Ukrainian interests in Minsk. It was a shock for me when I saw him in Donetsk in June 2014, meeting Ihor Plotnytsky and Oleksandr Zakharchenko. We hoped then that we were about to be liberated, but that did not happen. Luhansk and Donetsk are two regions infected by the rot which goes back to the second half of the 1990s.” Torba added that his book should not be seen as separate from the entire journalistic triptych. The events in the Donbas resonate most with the Gongadze-Podolsky case, which has not seen closure yet.

“Even while rereading the journalistic triptych, I still turn to another book, I mean Return to Tsarhorod. The enemy has not only taken bits of our territory, it tried to steal our history as well. I think our task is wide-ranging, as we need to not only end this war and liberate the lost territories, but also to realize our history and get it back. This is the most important thing,” Torba believes.

More to it, Den is taking pre-orders for the new edition of our historical bestseller Return to Tsarhorod, which sold out in less than six months. By the way, orders can already be placed with our online store at http://day.kyiv. ua/uk/library/books/povernennya-v-cargorod-poperednye-zamovlennya.

“I WISH THESE MEETINGS WERE A LITTLE LONGER, BECAUSE TWO DAYS ARE NOT ENOUGH...”

“I would call Den’s events representative of information management at its best, because the newspaper is independent and gives priority to no political trend, but rather bases everything on the patriotic principles. All efforts are aimed at combining energy of every single individual into a powerful positive block to build the Ukrainian state,” we heard from artist Serhii SAVCHENKO. “I really liked the evening in the Impact Hub Odessa. Ivshyna has a sharp mind, she picks up interesting information for a long verbal flow and keeps people’s attention without tolerating monotony. I wish these meetings were a little longer, because two days are not enough. I feel that Odesa is adapting to the newspaper’s nature, information choice, spirit. Meanwhile, I perceive Den’s 2015 Photo Exhibition like a set of cut capillaries which display blood circulation in the Ukrainian national body. These photos are documentary works which give a complete picture of contemporary Ukraine.”

“IT OFFERS A REASON TO PONDER OVER FUNDAMENTAL PROFESSIONAL QUESTIONS”

“Our faculty is extremely grateful to Den’s editor-in-chief Ivshyna and journalist Torba for finding time to meet with our students despite having a fairly tight schedule during their stay in Odesa. I believe that such meetings are extremely important and fruitful since they provide an opportunity for students who have chosen the profession of journalism to feel how contemporary Ukrainian journalists live and what they think about and work on as they go about their professional and responsible efforts which contribute to building up civil society. The meeting at the university, which lasted nearly two hours, was attended by students of all years. This discussion provided not only an opportunity to discuss the state and prospects of Ukrainian journalism, but also a reason to ponder over the fundamental professional and philosophical questions which one has to answer before engaging in information activities,” believes dean of the faculty of journalism, advertising, and publishing at Odesa Mechnikov National University Olena IVANOVA. “The faculty of journalism, advertising, and publishing is Den’s partner. Students of our faculty have participated in the Summer School of Journalism. I believe that training with Den offers our students great creative and professional self-fulfillment prospects, while the faculty obtains recognition of the high level of training offered to our graduates. The faculty is also grateful for replenishing our library collection with Den’s publications, which we plan to read and analyze.”

“IT IS GOOD TO SEE YOUR NEWSPAPER INITIATING SO MANY PROJECTS”

“In general, I am very interested in my colleagues, and that is why I came to the meeting with Den’s journalists. I believe that Ivshyna found the right words about the situation in the country,” journalist Oleksandr HALIAS told us. “It is good to see your newspaper initiating so many projects. I understand that it helps keep the reader’s attention, especially as the newspaper business is nowadays difficult to support. Publishing books is always good, especially when it is modern Ukrainian nonfiction. This can only be welcomed. I support your initiatives in principle and think it is a very useful thing.” 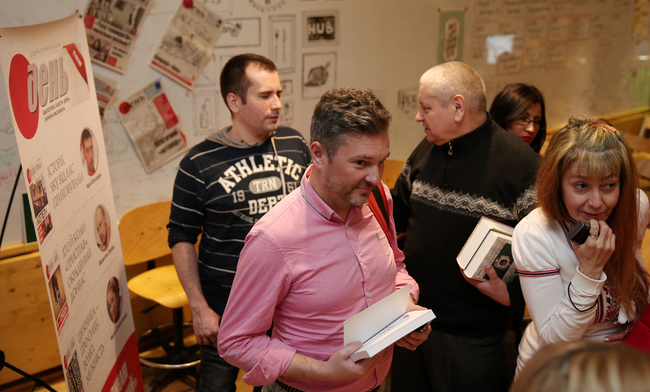 “IVSHYNA HELPS PEOPLE TO SEARCH FOR ANSWERS ON THEIR OWN”

“Ivshyna is a very interesting woman. Her stories hardly ever give answers to any questions, but rather help people to find these answers on their own. After listening to her, one can fill the blanks and understand something without assistance,” we heard from student of Odesa Mechnikov National University Illia SUKHODOLSKY. “It was interesting to hear Ivshyna’s take on the information policy in Ukraine. She also recalled the events of the 1990s, the contemporary history of Ukraine. Those events resemble strongly those occurring today. Unfortunately, politicians of the 1990s were not much different from today’s leaders either.”

“Journalists of this newspaper raise important questions and try hard to initiate discussions. I decided to come to the meeting with Ivshyna and journalist Torba to find out their views on the situation in this country. Also, I wanted to hear their suggestions on what can be done to effect real change,” civic activist Kyrylo FILIMONOV told us and added that he was interested in Den’s projects. “By the way, I have a book from Den’s Library series (Two Rus’s). I also know of other initiatives launched by your publication, including the Summer School of Journalism, since my friends took part in it.”

“I GOT MY MOTHER SUBSCRIBED TO THIS NEWSPAPER”

“I was greatly surprised to hear moderator of the meeting in the Impact Hub Odessa Svitlana Bondar to say that the 3.5-hour meeting with Den’s editor-in-chief was ending, since it felt like an instant! It was all said in one breath! From the first moment when my eyes met with Ivshyna’s, I had the wonderful world of patriots and artists opening to me as represented by this individual,” civic volunteer Natalia LAVROVA shared her impressions. “It is impossible to convey in words the emotion experienced by a person finally realizing that a great deal of our history, culture, literature was deliberately hidden by enemies of Ukraine so that we disappear. I understood that our enemies desired for centuries to prevent Ukraine from even existing on the world map. However, the Lord protects Ukraine. He sends talented heroic sons to our Mother Country. And we should never forget their names. I thank Ivshyna for her inspired talented labor, and for the excellent moment on that cold March evening which was warmed by all who came to the Impact Hub Odessa. I will wait for new meetings. By the way, I got my mother subscribed to this newspaper the next morning. It is never too late to discover one’s native country!”

“DEN IS SOMETHING THAT WE NEED TO STRIVE FOR”

“Den is a newspaper of the future. This is something that we need to strive for. These meetings are very important for the young generation that so desperately needs the right guidance. Ivshyna patiently and persistently indicates that one needs to begin changing the world with oneself: to read many books and thick newspapers, analyze what is going on, observe and evaluate the events, be conscious and organized, develop and promote this pattern of behavior in their environment. And then, perhaps, we will naturally get a new society of caring, active, and educated people who will bring Ukraine to the heights we aspire for,” student of Odesa Mechnikov National University Nadia OSMOKESKU believes.

“TO BE EDUCATED MEANS TO BE SUCCESSFUL”

“I have seen and listened to Ivshyna before, and am genuinely glad to have these meetings on every occasion. Her commitment to the development of regional cultural projects, readiness to offer real help in their implementation, expansion of Den’s publishing activities – this is important work that changes Ukraine for the better. To be educated means to be successful. Ivshyna confirms this by her personal experience. A successful publisher, a brilliant orator, a thoughtful interlocutor and philanthropist, she is one of the few modern Ukrainian enlighteners. I am deeply grateful for this incredible gift, a set of books from Den’s Library which has been donated to Bilhorod-Dnistrovsky [formerly known as Akkerman. – Ed.]. We will read, recommend, and discuss them with Akkerman youths, and hope to see our platform participating in Den’s future projects,” we heard from Andrii MERKUSHEV, curator of the “Successful Akkerman” cultural and educational center in the city of Bilhorod-Dnistrovsky.