“Among them, my fear retreats”

By Ivan LIUBYSH-KIRDEI, Kyiv – Kramatorsk – Ilovaisk. Photos by the author
Ukrainian soldiers keep high morale and optimism even when shelled by Grad rockets. May you come back alive, lads!

I had taken these pictures in Donetsk region a few days before we were encircled in Ilovaisk. They show different cities and towns, checkpoints and bases of our soldiers. For example, the tank photo was taken at a checkpoint that had sustained a mortar attack just a few days before, but our guys fought off the militants’ assault.

At first, it looked to me all the time that our soldiers were very tired. While tiredness is definitely there, of course, it seems to me now that they have just learned to appreciate every quiet moment. During a lull, they read books and newspapers, slowly smoke a lot, talk (mainly about their plans for the after-war future), lay in the grass, or feed animals who are very numerous in the warzone (some lucky four-legged creatures get adopted when soldiers go home on leave or are rotated).

I spent most of my time there with soldiers of the Peacemaker battalion. Former riot policemen and... active participants of the Euromaidan protests serve in it side-by-side. Looking at their companionship, I could not believe it at first. The lads sat at the table, dined, talked, joked, and laughed together. They just said later on that they stood there together to defend Ukraine, despite being on different sides of the Euromaidan barricades six months ago. Of course, they had not become friends right away, there were originally long conversations, discussions and debates, but in the end, the problem has been repeatedly discussed and relegated to the past. As a pleasant surprise, I    met the battalion’s cook and recognized him as the man who helped to evacuate casualties in Instytutska Street, the site of the very worst fighting, on February 20. He was now preparing lunch and dinner for former opponents. The war has erased any differences and united the lads... 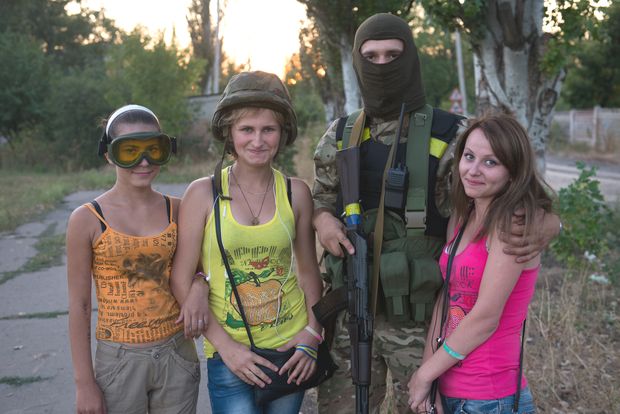 SOLDIERS SAY THAT THE OVERWHELMING MAJORITY OF RESIDENTS OF THE LIBERATED DONBAS CITIES TREAT THEM  WITH INDIFFERENCE, ALTHOUGH THERE ARE THOSE WHO THANK OR HELP THEM. A FEW GIRLS IN A LIBERATED VILLAGE ASKED TO TAKE PICTURES OF THEM WITH A SOLDIER, THANKED HIM FOR EVERYTHING HE HAD DONE, AND THEN STAYED TO TALK TO HIM

When we arrived at the Peacekeeper’s base in Donetsk region, some soldiers were just writing letters of resignation. At this moment, an old woman came to the base, bringing in her handcart a sack of potatoes from her vegetable garden and two jars of homemade canned food for the soldiers. The battalion’s commander told us then that the resignations were for the best, as unreliable people go, while the best and most reliable, those safe to take into the fight with him, stay. The grateful grandmother brought potatoes for men of this latter kind. Actually, it was with these most reliable lads that we would get encircled in Ilovaisk in a few days and stay there for five days. 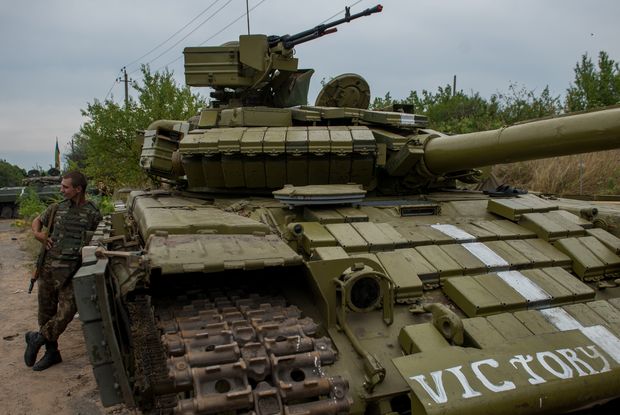 SOLDIERS SLEEP JUST UNDER THIS COMBAT MACHINE AT THIS CHECKPOINT. IT IS SAFER THAT WAY, BECAUSE THE CHECKPOINT, LIKE MANY OTHERS, FACES FREQUENT NIGHT-TIME MORTAR ATTACKS BY THE MILITANTS. THE LADS SAY THEY HAVE BEEN ABLE TO REPEL THESE ATTACKS SO FAR

On this trip to the eastern Ukrainian warzone, a lot happened to me for the first time. I experienced my first Grad shelling and Smerch shelling, spent nights in a damp basement side-by-side with our soldiers and residents of the destroyed cities. When I was first woken up in the basement by a terrible rumble, as the enemy shelled us with Grads, I felt fear, because it was really unpleasant when all the basement shook, and my body bounced over the ground from the force of impact. However, the men lying side-by-side with me just joked, saying that the shelling was the separatists’ way of saying “Good night.” On hearing it, I felt the fear vanishing, or at least retreating. Even when shelled by Grads, our soldiers keep high morale, optimism, and sense of humor. Of course, they, too, sometimes have minor panic attacks, feel hopelessness or despair, but it is rare, and passes quickly. These lads, like the lads from the other battalions encircled in Ilovaisk, like Donbas, Kherson, Svitiaz or Dnipro, are true soldiers: bold, emotionally restrained, but sincere and kind-hearted. Therefore, one can survive just about anything in their company. I  really would like to see all of them, and all of our soldiers and frontline medics, back home alive and healthy after our victory.