By Mariia PROKOPENKO, photos by Mykola TYMCHENKO, The Day
Photographer Anton Shebetko’s new project about LGBT in the army

Usually people rarely listen to audio works at exhibits, especially at openings. Even if they do, they put on earphones just for a minute. But there were no free earphones and people would stop for a long time to listen at Kyiv’s IZONE art gallery, where the exhibit “We Were Here” was opening.

The mechanical voice tells the living stories of the military, volunteers, and paramedics who are gays, lesbians, or transgender people. Next to you are photographs that show elements of camouflage and the LGBT rainbow flag. You can see no faces. The project author Anton Shebetko puts emphasis on the image of double camouflage that hides his heroes.

Far right-wingers often reproach LGBT people for dodging military service in the Donbas. The exhibit’s name is the answer to this: “We were here.”

“I WOULD DIVIDE THE MONOLOGS OF SOME HEROES IN TWO”

This is not Anton’s first project on an LGBT-related theme. The Isolation foundation says his project “Pleshka” about gays’ meeting places in Kyiv was shown last year at the Festival of Young Ukrainian Artists at Mystetsky Arsenal. Another project of Anton, “Common People,” is a series of warped portraits and interviews with hidden Ukrainian gays.

The “We Were Here” project comprises the stories of nine people. Only one of them dared to come out, i.e., to disclose being homosexual. Anton looked for his heroes with the help of friends, acquaintances, and experts.

“I would divide the monologs of some heroes in two,” Anton confesses. “I have no right to edit them because those were their words. But, clearly, the army is a very homophobic structure, where there is a great deal of discrimination and misogyny, i.e. scorn for not only LGBT people, but also women. Simply, some heroes prefer not to notice it or do not consider certain things as discrimination.”

Anton recorded interviews, arranged them as direct speech, and made up monologs which he voiced by means of the Google speech synthesizer in order to preserve anonymity.

“COMINGS-OUT SHOULD BE DONE ALMOST DAILY”

“When Anton Shebetko was recording an interview with me, he was asking questions much to the point. When I answered them, I began to understand that I was living an inadequate life, as I was hiding this,” Viktor explains. “It is also important in the social sphere that people see the face of the one who did a coming-out. They should see that he is an ordinary person who does not differ from others. That’s why I told Anton that I want my face to be open.” 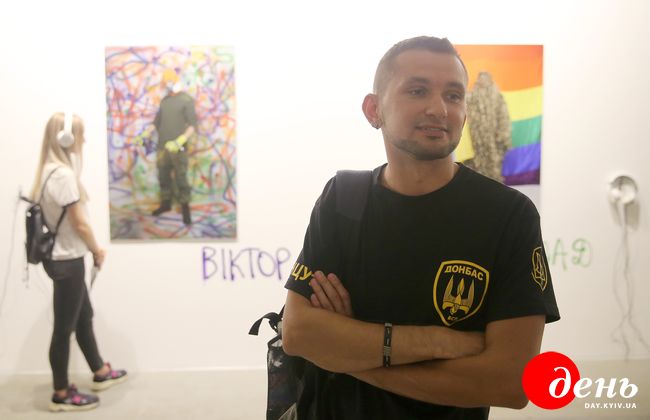 VIKTOR PYLYPENKO, WHO SERVED IN THE DONBAS BATTALION UNDER THE NOM DE GUERRE “FRENCHMAN,” IS A LITTLE TIRED OF COMMENTING TO JOURNALISTS. HE IS THE ONLY PROJECT PARTICIPANT WHO DARED TO COME OUT. HE CONFESSES THAT IT IS EASIER TO LIVE NOW THAT HE DOES NOT HAVE TO HIDE / Photo by Mykola TYMCHENKO, The Day

The man confesses that it is easier for him to live after he came out. Viktor is pleased that he does not need to hide. “In reality, comings-out should be done almost daily, for far from everybody reads the internet, where all this is published,” Pylypenko adds. “Someone may be telling a joke about gays, and I have to do a coming-out in front of these people to make them aware of being wrong, so to speak.”

Viktor was in fact a rifleman in the “Donbas,” but he had to perform various functions. “We were short of personnel. When all kinds of far rightists chased gays and lesbians in Kyiv, we lacked soldiers,” he says. “I had to use a heavy antitank grenade launcher, and this robbed me of normal hearing – I hear badly now. I also did a combat medic course and used to give first aid on the battlefield. My comrades and I would carry off the wounded under gunfire. My platoon was also an assault unit, and we mopped up such places as Shyrokine.”

“COMING OUT OF ISOLATION”

The exhibit “We Were Here” was put on as part of the project “Coming out of Isolation: through Art to Visibility.” It is a long-term interdisciplinary project of the Isolation foundation and NGO Kyiv Pride. Its aim is to spotlight the problem of discrimination on the basis of sexual orientation and gender identity in Ukraine through the prism of art.

In addition to Shebetko, the project involves Tetiana Kornieieva and Oleksii Salmanov. They studied the theme in March at the residency under the general guidance of the Polish artist Karol Radziszewski and tutors from Ukraine and the UK. Following this, the artists began to work on their own projects.

Besides, Kornieieva performed “Come In/Out” at the Kyiv Pride opening ceremony in June and then prepared, together with the online publication The Village Ukraine, a special project, “Alphabet of Equality,” in which LGBT people tell about themselves. Salmanov is going to present his project in the fall.

Isolation foundation curator Kateryna FILIUK says: “Handling the LGBT topic, I understood a banal thing which many people pass over. Whenever we say that what is going on in the bedroom is ‘their’ own business, we often forget that heterosexual couples can formalize their relationship, get married, acquire property, and legally divide, sell, or inherit the latter. They have children. All these moments present difficulties for the LGBT community who are in fact deprived of these basic rights. This is why openness is important – in order not to flash your identity around but to have the same rights as other citizens have.”

The exhibit “We Were Here” will remain open until October 7. There will be debates and film showings – you can follow announcements on IZONE’s Facebook page https://www. facebook.com/izone.ua.