“I am grateful that you do not forget me”

August 23 marks the 102nd day of Oleh Sentsov’s hunger strike. Why it is important to write and read out letters to the “prisoners of the Kremlin” “All my thoughts are now with Oleh Sentsov, who is risking his own life for the sake of all the political prisoners. We must remember that freedom is an inalienable human right, which must be protected by all possible means and through every effort. Although Sentsov is in prison, his ideas are free. And his voice is carried across all the continents as we pick it up,” the writer and historian Olena Stiazhkina said as she read out a letter to Sentsov sent by the Scottish writer Ian Rankin.

In the afternoon of August 21, activists brought to the Russian embassy in Kyiv dozens of letters sent to Sentsov from around the world. The “Solidarity with Oleh Sentsov” event became part of the initiative launched by PEN International in London (that organization brings together writers, editors, and translators from all over the world and is a powerful human rights body). The Sentsov letter-writing marathon began on August 14. Simultaneously with Kyiv, solidarity events took place in Sweden, Denmark, the UK, and the US. Also, Ukraine saw such events not only in the capital, but also in Lviv and Vinnytsia.

“We received news in recent weeks, primarily from Sentsov’s lawyer, that he had stopped receiving letters,” said Tetiana Teren, executive director of the Ukrainian PEN, to describe the idea of the campaign. “The lawyer said that Sentsov felt himself to be in an information vacuum and did not know anything about what was happening in the world. He had the impression that the message he wanted to convey to the world – not about himself, but about all the political prisoners – had begun to fade, that the protests had begun to wind down. Sentsov was very worried about it. This situation is dangerous, many political prisoners of the Soviet era recall that the authorities used the same technique then, namely to limit a prisoner’s access to information so that they find themselves in a psychological vacuum. We believe that this situation is not only difficult, but illegal and unfair. Therefore, this campaign began first of all as a protest against the fact that Sentsov did not receive correspondence, which is his legal right, recognized all over the world under international and European law. These letters have already crossed some boundaries, probably going beyond even this campaign as we are now reading them out. I think it is important that every one of us, not just Sentsov, hears these letters as well.”

Letters in various languages were sent to PEN International’s e-mail address from all over the world. There they were translated into Russian in the last two days, since only letters in that language may be delivered to the Labytnangi prison camp where Sentsov is held. 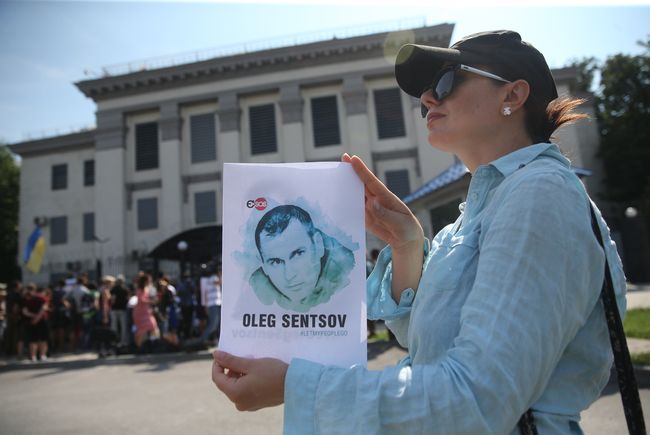 During the marathon, several hundred letters were collected. Well-known people, such as the Nobel Prize winner Svetlana Alexievich, writer Margaret Atwood, writer and film director Mike Leigh also addressed Sentsov, and this list goes on and on. “Ordinary people from around the world write to Sentsov as well,” Teren added. “Often they tell him something about themselves. Some letters are touching and poignant, like one telling about its author living by a river and describing that river. Someone wrote that they had seen a sunflower field. There is a letter from a seven-year-old girl, and she says she attends such and such grade, lives in such and such city, learned about Sentsov from the news and resolved to write a letter.”

According to Teren, PEN International will try to do everything in their power to get the letters to the prisoner. In particular, they will use the resources available to his lawyer and human rights activists.

On August 21, a letter from Sentsov, dated August 14, was posted at change.org, the website where the petition calling for saving him and other “prisoners of the Kremlin” had been posted.

“Hello everybody! Thank you very much for the birthday greetings that I received from various people through the RosUznik website (the letters’ delivery was much delayed). Thank you for the warm words and wishes. I will try to not let you all down, not surrender and not die. True, it is likely that out of these three desires, only a maximum of two will be fulfilled! :)) Folks, I cannot respond to everyone, but there is no special need anyway. Still, I am grateful that you do not forget me, and support not only me but all the other Ukrainian political prisoners in Russia! I wish you all luck and happiness in this life and in all the next ones! :)) Yours respectfully, Oleh Sentsov,” this letter reads.

The petition, published in the first days of the prisoner’s hunger strike, has already been signed by almost 203,000 people. Meanwhile, Ambassador of Ukraine to the US Valerii Chaly used a press conference held at the Ukrinform news agency (and dealing with the partnership between America and Ukraine) to call on everyone to sign a similar petition on the White House website (https://petitions.whitehouse.gov/petition/save-oleg-sentsov). To receive an answer from the US administration, we still need to collect almost 79,000 signatures out of 100,000 needed by September 8. You can sign a petition in just a couple of minutes.

“SUCH EVENTS ARE NOT ABOUT QUANTITY, BUT RATHER ABOUT TAKING A STAND”

The international community has regularly made appeals in support of the “prisoners of the Kremlin” (one made by the Ministry of Foreign Affairs (MFA) of Lithuania is a recent example). At the same time, there have been such weird moves as Vladimir Putin being invited to the wedding of the head of Austria’s MFA.

“Putin, besides attending the wedding, had a meeting with Angela Merkel [the German Chancellor. – Ed.] later on. Thus, activists of the Save Oleh Sentsov group held a picket just before the venue where it was held... Putin’s motorcade was greeted by shouts ‘Murderer!’ and ‘Save Oleh Sentsov!’ All these details make up the complex picture that we are creating by ourselves,” believes Oleksandra Matviichuk, who serves as chairperson of the board at the Center for Civil Liberties which became a co-organizer of the solidarity campaign in Kyiv.

She reminded us that the Save Oleg Sentsov campaign events had been held in 45 countries, even though nobody initially expected such broad coverage.

By the way, almost a hundred people attended the Kyiv event. It is a pretty good result, considering that it happened on a weekday, when many people were at work. Matviichuk emphasized that other things are important in these events. “Firstly, it is about simultaneity. When such events are held simultaneously in France, Germany, and Ukraine, it is noticeable. Secondly, it is about regularity. People think like that: we attended one time, then another one, but someone will replace us on the third occasion. No one will replace you. And this is an important feature of these events,” the human rights activist explained. 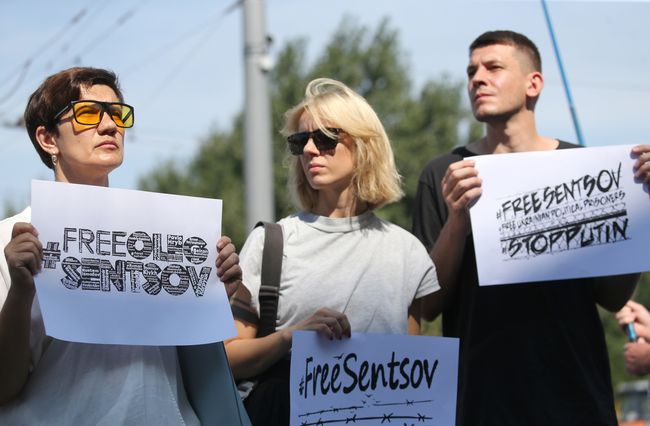 Support initiatives for the “prisoners of the Kremlin” are regularly joined in by Russians. “We have active colleagues there who hold very risky events in Kazan, Moscow, St. Petersburg, and other cities. During the FIFA World Cup, all protest activities were banned in Russia, so they staged one-person pickets, distributed leaflets, and posted Save Oleh Sentsov banners on bridges,” Matviichuk added. “I know about a Russian who has been arrested at least three times while staging one-person pickets. She was alone, but her example is very important. Therefore, this is not about quantity. This is about taking a stand.”

“WE MUST BUILD UP PRESSURE FOR A POLITICAL SOLUTION”

A week ago the Kremlin in fact rejected Liudmyla Sentsova’s plea to pardon her son. According to Hromadske Television, the Russian President’s Administration stated that the convict himself should make this kind of plea.

“No decision has been made yet. It is not Putin’s rejection, and all of these refusals comprise a phrase that the final decision is to be made by the President of Russia,” Oleksandra Matviichuk says, describing the Oleh Sentsov situation. “This means we must build up pressure for a political solution. For pardon is just a way to formalize it.”

In Matviichuk’s view, the Ukrainian leadership must stay in close contact with the international partners that can influence the situation with the Kremlin’s captives and Donbas prisoners of war.

Human rights activists know about 70 people imprisoned for political motives in Russia and the occupied Crimea. Moreover, these activists are aware that it is just the tip of the iceberg.

“We are not in a position to examine the materials of all cases in the occupied Crimea, so relatives do not need to apply immediately,” Matviichuk notes. “What matters here is that there is a tendency. Russia has launched a campaign against citizens of Ukraine with the aim to set up the specter of the enemy in Ukrainians. That’s why they trump up charges of spying, sabotage, atrocities against civilians, etc. As for Crimea, we can foresee an increase of such cases.”

“There are dozens of political prisoners today, and we know that the regime is trying to stand to the end. To ask and entreat it is the same as to expect mercy from the serial killer who derives sexual gratification from torturing,” Mykola RIABCHUK, president of the Ukrainian PEN club, said at a Kyiv protest rally. “Public opinion is the only thing that can have an impact. We are here for this very purpose – to remind this regime that we remember and expect political prisoners to be freed, to say this to our compatriots who vacation in and make tours of the occupied Crimea and earn money in Russia, and to remind this to our Western partners who dance at wedding parties with representatives of this regime and think every six months about whether or not to continue those feeble sanctions against this regime. We must behave more firmly, for only firmness can exert influence. Only the prospect of a new Nuremberg or Hague trial can stop them.”